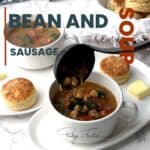 Bean and Sausage Soup is both nutritious and simple to make. This hearty soup is made with two kinds of canned beans as well as smoked sausage and healthy vegetables. The leftovers are just as delicious, if not better.

Here’s What You’ll Need For This Recipe

For the preparation, I sliced the sausage, diced the onions, carrots and celery, minced the garlic and tied the rosemary, thyme and oregano is a cheesecloth packet using kitchen twine.

I also drained and rinsed the canned beans.

I wanted the soup to be a bit creamy. Therefore, I puréed one of the drained cans of cannellini beans in the blender with some chicken broth.

Here’s How I Made the Bean and Sausage Soup

When the sausage was fully cooked, I removed it from the Dutch oven and drained it well. This included pressing the sausage between pieces of paper towel to remove as much of the grease as possible.

I added the onions, carrots and celery to the Dutch oven and sautéed them over medium heat for about 5 minutes. During this time, I scraped up the flavorful fond from the bottom of the Dutch oven.

Once the mixture reached a boil, I reduced the heat to medium low, covered the Dutch oven and simmered the soup for 30 minutes.

I gave the mixture a stir, covered the Dutch oven and simmered the soup for another 20 minutes.

Finally, I added the spinach and cooked the mixture until the spinach was wilted. This took about 5 minutes.

I served the Bean and Sausage soup with a sprinkling of freshly grated Parmesan cheese on top and some of my Southern Flaky Biscuits.

The soup was amazing. The vegetables were perfectly cooked, and the flavors totally complimented one another. Yum!

Can this soup be made vegetarian?

What are cannellini beans?

Cannellini beans are a white bean with a creamy texture. They are large and oval in shape are sometimes referred to as white kidney beans.

Can other beans be substituted in this recipe?

Feel free to use whatever beans you have on hand such as great northern beans, pinto beans, navy beans, etc.

Is there a substitute for the spinach?

Rather than using spinach, you can use kale or Swiss chard. You can also omit the spinach.

How do you store this soup?

If you’re a fan of healthy soup, you should try these amazing recipes: 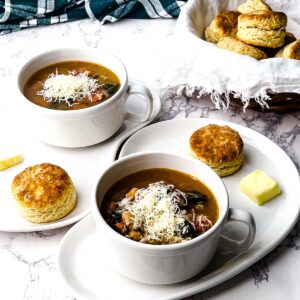 Bean and Sausage Soup is both nutritious and simple to make. This hearty soup is made with two kinds of canned beans as well as smoked sausage and healthy vegetables. The leftovers are just as delicious, if not better.
5 from 2 votes
Print Pin Rate
Course: Soup
Cuisine: American
1 hour 20 minutes
Total Time: 1 hour 20 minutes
Servings: 8 people
Calories: 233kcal
Author: Chula King