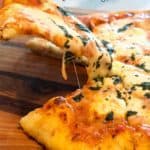 Cast-Iron Skillet Pizza Margherita is the ultimate in simplicity and taste. Its crisp crust is topped with a simple home-made pizza sauce, parmesan cheese, mozzarella cheese, and fresh basil. One bite of this classic pizza and you’ll never opt for the store-bought pizza again!

Why You Should Try This Cast-Iron Pizza

I wish that I could say that cooking pizza in a cast-iron skillet was my idea, but it wasn’t. I was inspired to make this wonderful pizza after watching an episode of America’s Test Kitchen.

In the past when I’ve made pizza, I’ve cooked it on a pizza stone in the oven. While this worked, the pizza stone consistently smoked and smelled up the kitchen to the dismay of the Master Taste Tester.

The cast-iron skillet not only solved this problem, but also produced a superior crispy crust.

Here’s How I Made The Pizza Dough

You could use store-bought pizza dough. However, making your own pizza dough is super easy.

Sometimes, I make the dough ahead of time. Rather than letting it rise, I roll it in a bit of olive oil, place it in a quart Ziploc bag, and refrigerate it until I’m ready to use it.

Here’s How I Made the Pizza Sauce

While the dough was rising, I made a simple pizza sauce consisting of canned whole tomatoes, garlic, olive oil, white wine vinegar, and dried oregano.

First, I drained the canned tomatoes. Then, I placed them to the food processor fitted with a steel blade and added the remaining ingredients. I processed the sauce until it was smooth. This took about 30 seconds.

Finally, I seasoned it to taste with a bit of salt and freshly ground black pepper.

I actually traced an 11-inch circle on the other side of the parchment paper to serve as a guide.

She started by spreading about ⅓ of a cup of pizza sauce over the surface of the dough. She made sure to leave about a half-inch border around the edge.

Susan let the pizza rest in the pan for about 5 minutes after removing it from the oven. Then, she used a spatula to transfer the pizza from the pan to a paper towel lined wire rack to cool for another 5 minutes.

The reason for putting it on the paper towels was to remove any excess olive oil from the bottom.

Finally, the moment of truth. Susan transferred the pizza to a cutting board, and cut it into wedges.

The bottom crust was perfectly crispy, and the top had the perfect blend of the pizza sauce, cheeses and basil. Yum!

Can store-bought pizza sauce be used?

How many cast-iron pizzas will a pound of store-bought pizza dough make?

If you use a 12-inch cast-iron skillet, then one pizza requires 8-ounces of pizza dough. Therefore you can make two cast-iron pizzas with a pound of store-bought pizza dough.

How long can you keep the pizza dough in the refrigerator if made ahead of time?

Can this recipe be adapted for different types of pizza?

One of the beauties of this recipe is that it’s very basic. Therefore, feel free to add whatever toppings you desire to the basic pizza.

According to Cooks Illustrated, the best way to reheat leftover pizza is to place slices of cold pizza on a rimmed baking sheet. Then cover the baking sheet tightly with aluminum foil. Place the baking sheet on the lowest rack of a cold oven and set the temperature to 275°F. Let the pizza warm until the bottom is crisp and the cheese has melted, 25 to 30 minutes.

If you’re a fan of pizza like I am, you should check out these delicious pizza recipes:

I first blogged about this amazing recipe on December 28, 2017. Since then, it’s become my go-to recipe for easy and delicious pizza.

This repost contains updated text and photographs, but the same great recipe.

I hope you liked this recipe for Cash-Iron Skillet Pizza Margherita as much as I do. If so, please consider rating it and leaving a comment. Also, if you’d like to receive notifications of new posts by email, enter your email address in the Subscribe box. 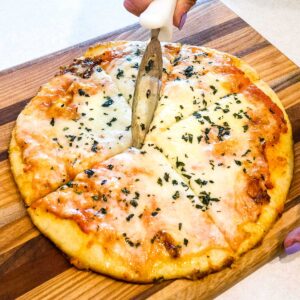