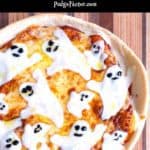 Halloween Ghost Pizza is the ultimate in simplicity and taste. Its crisp crust is topped with a simple homemade pizza sauce, Parmesan cheese, and Mozzarella cheese, and finished with adorable Mozzarella ghosts. One bite of this classic pizza and you’ll never opt for the store-bought pizza again!

I started by making the pizza dough consisting of bread flour, instant yeast, salt, olive oil, and water. The beauty of this crust is that the food processor does most of the work.

Sometimes, I make the dough ahead of time. Rather than letting it rise, I roll it in olive oil, place it in a Ziploc bag, and refrigerate it until I’m ready to use it.

I added all of the pizza sauce ingredients to my blender and puréed it for about 30 seconds. Then, I transferred the pizza sauce to a bowl, covered and refrigerated it until I was ready to use it. That’s it!

I did a fair amount of experimentation on how to best make the ghosts and how to best use them.

For making the ghosts, I settled on sliced Mozzarella cheese and a three ½-inch and a 2-inch ghost cookie cutter.

Without going into the experimentation, I placed a slice of Mozzarella cheese on a flat surface and used the large and small ghost cookie cutters to cut out the Mozzarella ghosts!

The cookie cutters that I used were of a perfect size to cut out a large and small ghost from one slice of Mozzarella cheese!

Again, through experimentation, I decided that cut-out black olives were the best solution to the eyes and mouths.

With my experimentation with making the Ghost Pizza, I concluded that the best time to add the Mozzarella ghosts was when the pizza came out of the oven.

I wanted the ghosts to have eyes and mouths. Also, I wanted to know how to best position the ghosts.

Therefore, I drew a rough circle on a piece of parchment paper that approximated the size of the finished pizza. Then, I flipped the parchment paper to the other side and positioned the ghosts with their eyes and mouths as I wanted them on the pizza!

Putting the Halloween Ghost Pizza Together

First, I divided the prepared pizza dough in half. I refrigerated the half that I didn’t use.

Then, I pressed and rolled the other piece of dough into an 11-inch round on a floured piece of parchment paper. Next, I greased a 12-inch cast-iron skillet with olive oil.

I placed the dough in the skillet and pushed the dough to the edges to completely cover the bottom of the pan.

Next, I spread about ⅓ of a cup of the super-simple pizza sauce over the surface of the dough. I left about a half-inch border around the edge (Photo 1).

Then, I sprinkled the grated Parmesan cheese over the sauce (Photo 2). After that, I sprinkled on the shredded Mozzarella cheese (Photo 3).

To give the crust a jump-start, I heated the skillet over medium heat for about 5 minutes until the outer edge of the dough was set (Photo 4).

Finally, I placed the skillet in a preheated 450° F oven for about 9 minutes until the edge of the pizza was golden brown, and the cheese was melted.

When I pulled the pizza out of the oven, I proceeded to place the ghosts around the top.

Once all of the Ghosts had been placed, I transferred the Ghost Pizza from the cast-iron skillet to a cutting board, and drizzled it with olive oil.

The Halloween Ghost Pizza was so cute that I hated to cut into it! However, it was time to eat, so . . . .

The Halloween Ghost Pizza was as delicious as it was cute. The crust was perfect with just the right amount of ooey-gooey cheese and pizza sauce. Yum!

Can store-bought pizza sauce be used in this recipe?

Can you use store-bought pizza dough in this recipe

If you’d prefer, you can use store-bought pizza dough in this recipe. One pound of pizza dough will make two pizzas.

How long can the pizza dough be kept in the refrigerator if made ahead of time?

If you like the idea of using a cast iron pan to make a pizza, then you should check out my Cast-Iron Skillet Pizza Margherita. It’s amazing!

Also, if you’re looking for some more savory recipes for Halloween, check out these: 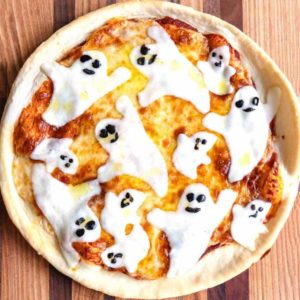