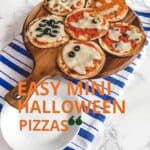 Easy Mini Halloween Pizzas will delight your friends and family, young and old. They’re easy and fun to make with flour tortillas for the crust and decorations made with sliced cheeses and black olives.

I used flour tortillas brushed with olive oil for the thin and crispy crust for the mini pizzas.

I made my own pizza sauce, but you could use a store-bought variety.

I used both shredded and sliced Mozzarella cheese and sliced cheddar cheese for the toppings. I used black olives for the spider and decorations. Finally, I used a small piece of bell pepper for the Jack O’Lantern stem.

For the ghosts and Jack O’Lantern cutouts, I used cookie cutters. Specifically, I used an egg-shaped cookie cutter for the Pac-Man ghost and cut the zigzag bottom with kitchen shears.

I used a pizza cutter for the mummy to cut thin strips of mozzarella cheese.

Making the Thin and Crispy Crust

Did you know that flour tortillas make the perfect thin and crispy pizza crust? Since discovering this magic, I’ve used flour tortillas when I want a quick and easy pizza!

I started by cutting 4 ½ to 5-inch circles from 10-inch flour tortillas for the Mini Halloween Pizzas. The thinner the tortillas, the crispier the crust.

Then, I brushed both sides of the tortilla circles with olive oil. Next, I heated both sides in a large skillet over medium heat until they were golden brown and crispy. This took 2 to 3 minutes per side.

I brown the tortillas as a head start to get the crispy crust!

I cut thin strips of mozzarella cheese for the mummy pizza and used two sliced black olives for the eyes.

For the Pac-Man ghost, I started by cutting a slice of mozzarella cheese with an egg-shaped cookie cutter. The slice of cheese was shorter than the cookie cutter, which was no problem. Next, I used kitchen shears to cut the zigzags at the bottom and sliced black olives for the eyes.

Finally, for the Jack O’Lantern pizza, I used a Jack O’Lantern or pumpkin cookie cutter with a slice of cheddar cheese. I cut the triangle eyes and the mouth from mozzarella cheese scraps and a small piece of bell pepper for the stem.

Once the crust and pizza toppings were ready, I put the Mini Halloween Pizzas together.

I started by spreading two teaspoons of pizza sauce on each of the crusts I had placed on a large baking sheet lined with non-stick aluminum foil.

Next, I added about two tablespoons of shredded mozzarella cheese to one of the pizzas. This was for the base of the spooky spider pizza.

I left the other pizzas un-topped. This is because I had learned from experience that the cheese cutouts blended too much when melted with a cheese topping below them. This resulted in everything running together. Trust me on this!

I popped the pizzas into a preheated 400°F oven for about 6 minutes. After 6 minutes, the cheese was nicely melted, and the pizza sauce was bubbling.

I removed the pizzas from the oven and added the toppings.

I built the spider on the pizza with the cheese. The melted cheese served to hold things in place.

I placed the different cheese toppings on the other pizzas. Then, I returned the pizzas to the oven for another minute to allow the cheeses to melt.

Once the cheeses started melting, I removed the pizzas from the oven. I didn’t want the cheese to melt too much. The reason was that the pizzas would lose definition.

I ended up with six adorable Mini Halloween Pizzas. Each one was unique in its appearance. However, every one of them was amazingly delicious. Yum!

Initially, I thought street flour tortillas would be perfect for these tasty Halloween treats. The street tortillas were the correct size. However, at least the ones that I bought were quite thick. The result was a thick and chewy crust.

Can the pizzas be made ahead of time?

These pizzas are best eaten after they’ve cooled a bit from the oven. After that, they can be rewarmed just like regular pizza but aren’t quite as good. You can, however, prep all of the ingredients ahead of time so that all that’s left is putting the pizzas together.

The mini pizzas described here are just ideas. For example, the mummy and spooky spider pizza don’t require cookie cutters. In addition, you could use a glass to cut out the cheese for the Pac-Man ghost pizza. Use your imagination to create different designs!

Why is the cheese added towards the end of cooking the pizzas?

When I first started experimenting with making these little pizzas, I topped each one with shredded mozzarella cheese and baked them like I would any pizza. Then, I added the different cheese cutouts. What happened was that the cheese cutouts blended in too much with the other cheese when they melted. You really couldn’t see the different designs that well.

If you’re interested in other Halloween treats, check out these fantastic recipes:

I hope you liked these recipes for Easy Mini Halloween Pizzas as much as I do. If so, please consider rating it and leaving a comment. Also, if you’d like to receive notifications of new posts by email, enter your email address in the Subscribe box. 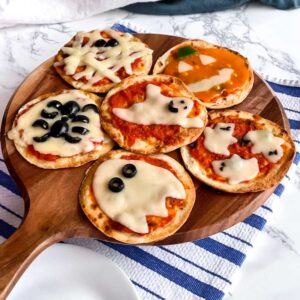