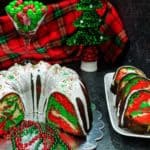 Brighten your holiday season with this rich and moist Christmas Surprise Lemon Bundt Cake. It may be cold outside, but the lemony cake feels like springtime, and tastes amazing under a layer of lemon glaze. Every piece is a surprise! 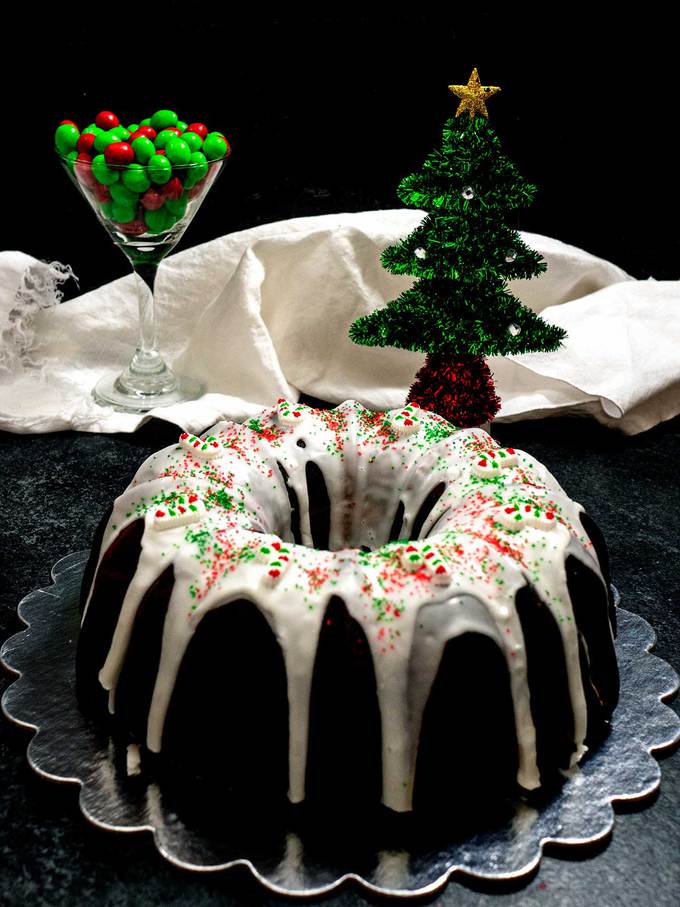 This year, my brother had a huge crop of Meyer Lemons – more than he could possibly use. I decided to use some of his lemons to make this amazing bundt cake. It is Susan’s favorite lemon pound cake, and one that I’ve been making for years. I jazzed it up with bright swirls of Christmas colors in every piece. I’ve never been disappointed by it, nor will you! 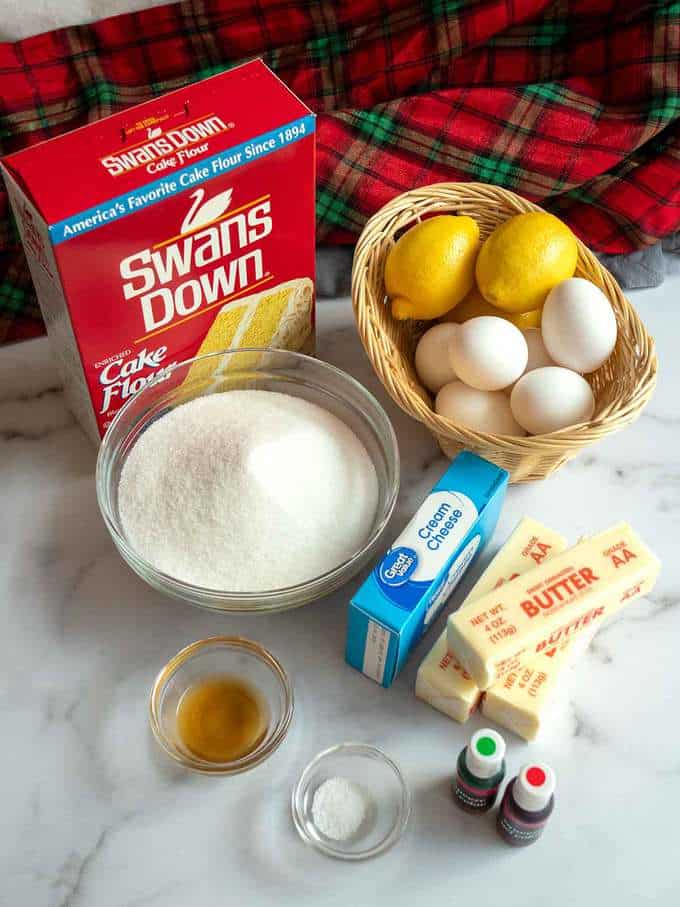 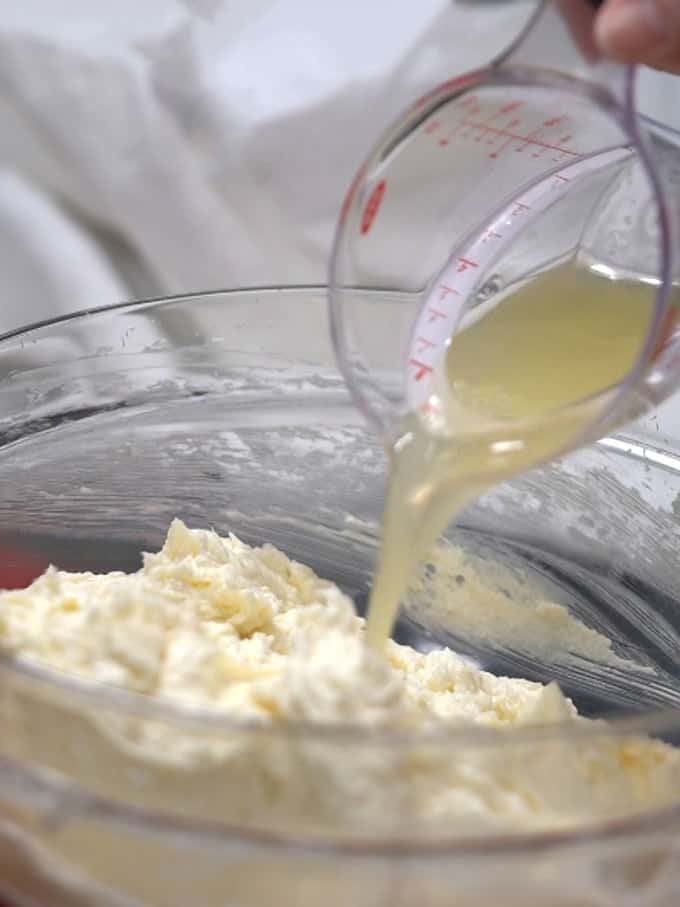 After that, I added the eggs, 2 at a time, and continued beating the mixture until the eggs were well combined. 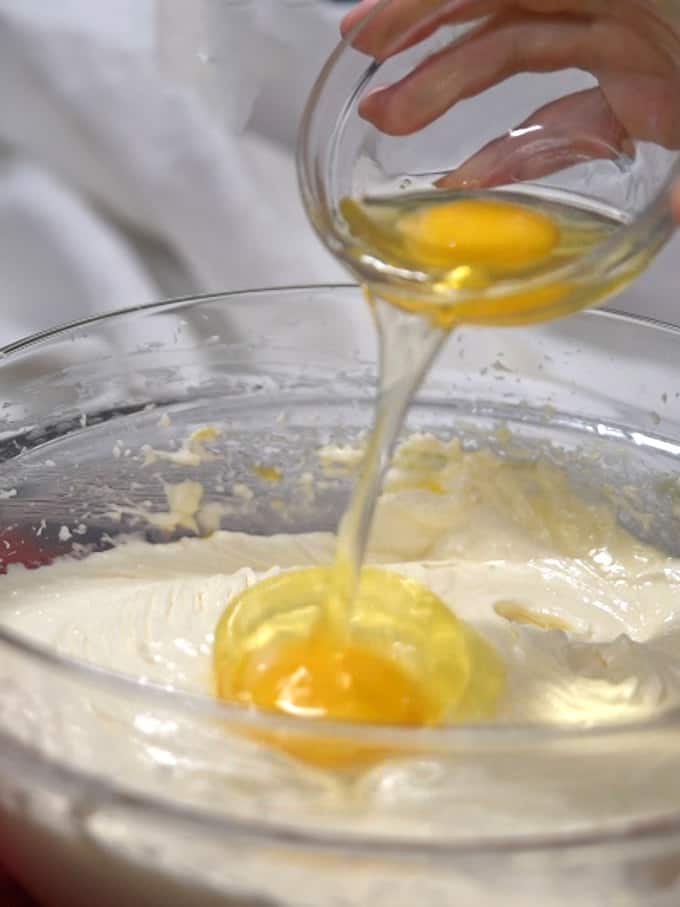 Finally, I added the cake flour, and beat the mixture on low just until the flour started to be incorporated. At that point, I switched to a silicon spatula, and carefully continued folding the flour into the batter. 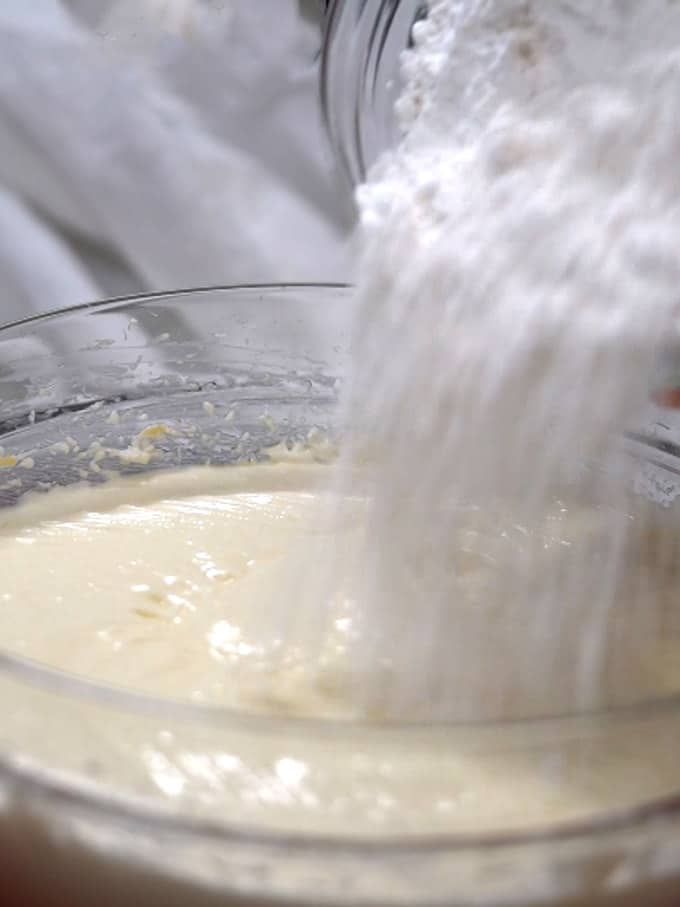 Coloring the Batter for the Christmas Surprise Lemon Bundt Cake

For the Christmas Surprise Lemon Bundt Cake, I wanted to make swirls of red, green and regular colored batter. So now comes the nerd in me! Before starting the cake batter, I weighed the bowl. Once the batter was made, I weighed the bowl again. I subtracted the weight of the bowl from the with the batter in the bowl to determine that I had approximately 63 ounces of batter. When I divided the 63 ounces by 3, the result was 21 ounces of batter for each of the three colors! 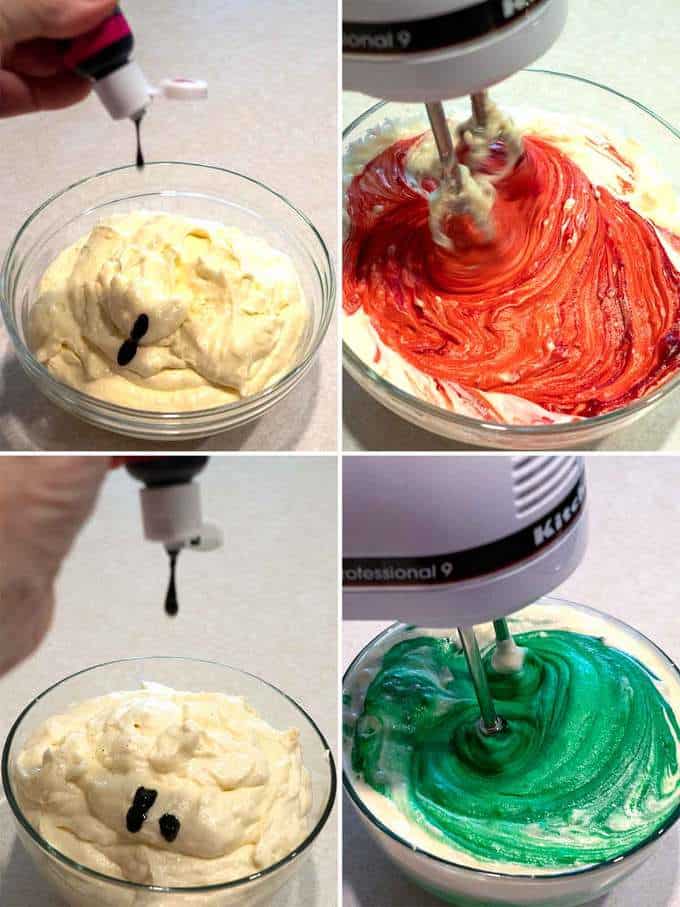 Before adding the batter to the pan, I sprayed the bundt pan with a non-stick baking spray.

Then, I used ice cream scoops to scoop a layer red, green, uncolored, red, green, and uncolored batter into the bundt pan. Next, I used a butter knife to swirl or marble the colors together. I gave the pan a couple of taps on the counter to make sure that the batter was fully distributed. For the second layer, I added the three colors of the batter, making sure that they were added where two colors of the first layer came together. Then, I used a butter knife to swirl the second layer. I repeated the process for the third and final layer.

Next, I popped the cake into a preheated 350° F oven for 1 hour. After an hour, the cake was golden brown and had started to pull away from the sides of the pan.

After I took the cake out of the oven, I inverted it onto a wire cooking rack that I had set over a rimmed baking sheet. It came right out of the pan. While the cake was still hot, I brushed it all over with a simple lemon syrup that I made by heating together lemon juice and sugar. Once the cake had cooled completely, I drizzled on a lemon glaze made with confectioners’ sugar and fresh lemon juice. 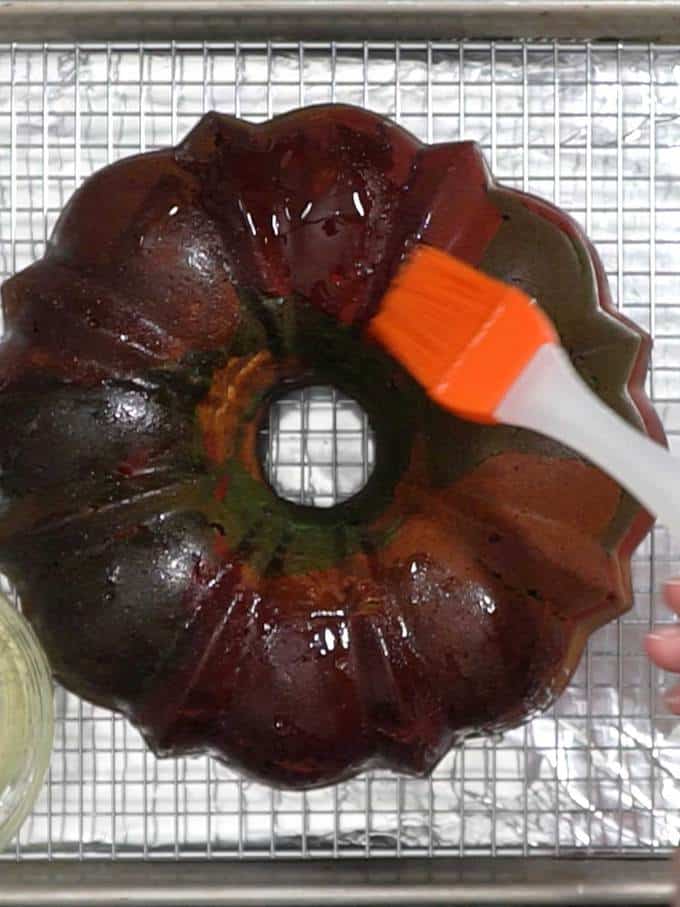 I finished the Christmas Surprise Lemon Bundt Cake with some candied stockings and red and green sprinkles. I thought to myself that if the cake looked as good on the inside as it did on the outside, it’ll be amazing. 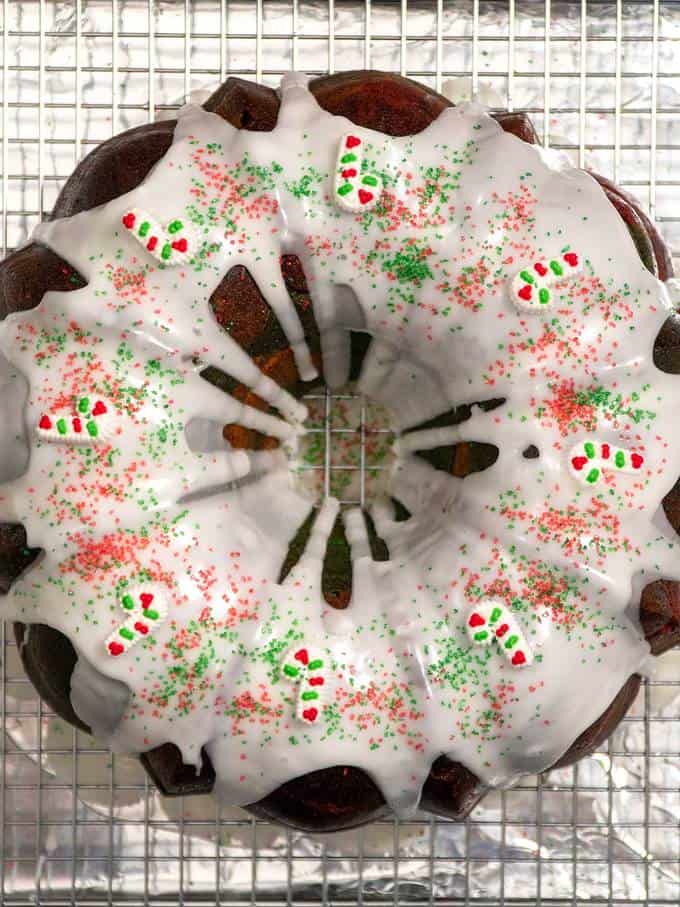 When the moment of truth arrived, I was actually blown away when I cut into the Christmas Surprise Lemon Bundt Cake and saw the amazing designs and color combinations. Every piece was truly a surprise. On top of that, the cake tasted incredible. Merry Christmas! Yum! 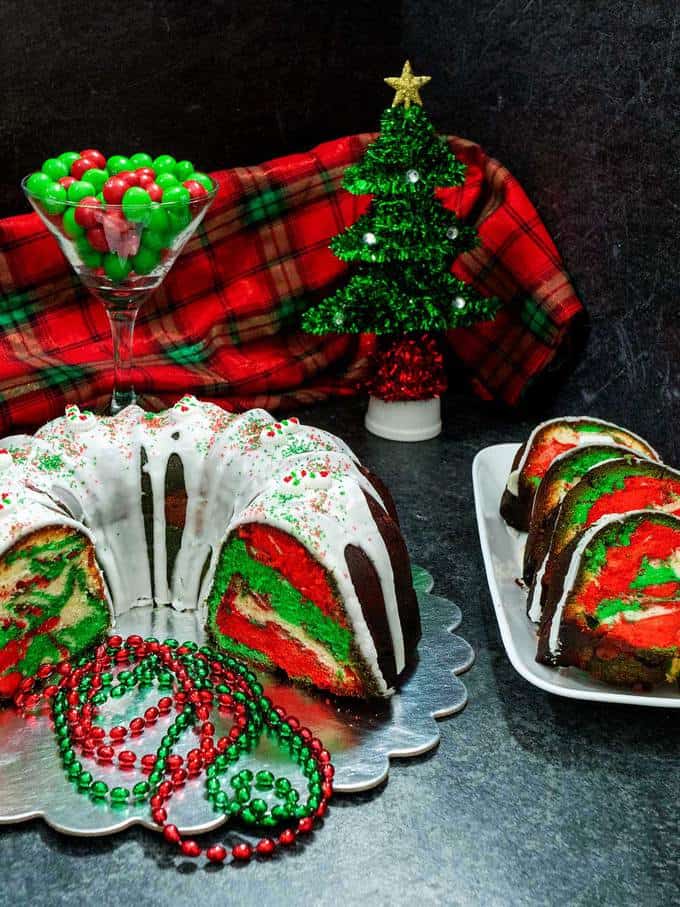 If you’re interested in other amazing Christmas Treats, check out: 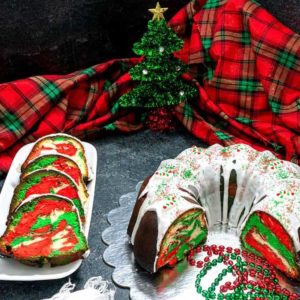