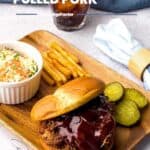 Instant Pot Pulled Pork is super easy to make and absolutely delicious. It’s perfect for Super Bowl gatherings or any time you want a no-fuss recipe that can be made ahead of time and reheated for an amazing meal.

Why You Should Make This Recipe

This delicious and easy recipe produces tender pulled pork flavored with spices. You should definitely make it because:

How I Made the Dry Rub

This delicious pulled pork recipe starts with a simple dry rub that is used to coat the pork.

Making the dry rub was super simple. All I did was to add all of the dry rub ingredients to a 1-cup mason jar, screw on the lid, and give the jar a good shake to combine all ingredients.

It doesn’t get much easier than that!

What I Used To Make The Pulled Pork

Once I had the dry rub made, the remaining ingredients for the pulled pork were pretty basic.

Cooking The Pork In The Instant Pot

After 90 minutes, I let the Instant Pot depressurize normally. This took another 20 minutes or so.

I served the Easy Instant Pot Pulled Pork on toasted buns with my Quick and Easy Coleslaw, French fries and dill pickles. Yum!

What is the best cut of meat for pulled pork?

While any cut of pork can be used for pulled pork, pork butt is probably the best cut. The reason is that it is a relatively fatty piece of meat. During the cooking process, the fat melts away leaving incredibly moist and tender meat.

Is pork butt the same as Boston butt?

The terms pork butt and Boston butt are used interchangeably. It’s a relatively inexpensive piece of meat cut from the upper front part of the pig’s shoulder. Therefore, it’s also referred to as pork shoulder.

Why is it called a “butt” when it comes from the animal’s shoulder?

In the mid 1700’s, the New England butchers would take cuts of pork that weren’t necessarily desirable and pack them into barrels called “butts” for shipment elsewhere – thus the name Boston Butt!

What does “butt” have to do with a barrel?

As it turns out, “butt” was an old English measurement for wine casks of a particular size and volume.

Why is it called pulled pork?

The reason that it’s called pulled pork is that the meat is literally pulled apart.

Can pulled pork be made without an Instant Pot?

Is there an advantage to using an Instant Pot to make pulled pork?

The advantage of using an Instant Pot, or pressure cooker for making pulled pork is that it’s a must faster way to cook the pork.

Why not add the barbecue sauce to the Instant Pot when cooking the pork?

A lot of recipes call for including barbecue sauce in the liquid for cooking the pork. My preference is to let the dry rub do its job in the cooking of the pork and then add the barbecue sauce right before serving the pulled pork. This, however, is a matter of preference.

I’m a big fan of pulled pork and have several other recipes that you might find of interest:

I hope you liked this recipe for Easy Instant Pulled Pork as much as I do. If so, please consider rating it and leaving a comment. Also, if you’d like to receive notifications of new posts by email, enter your email address in the Subscribe box. 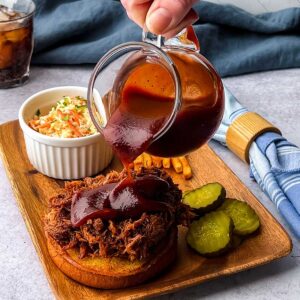