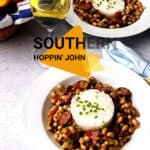 One Pot Southern Hoppin’ John is a traditional dish served in the South on New Year’s Day. This easy one pot wonder consists of a black-eyed pea mixture served over rice. Hoppin’ John is often accompanied by cornbread and collard greens.

Cornbread, which is the color of gold, is thought to represent wealth.

The collard greens, which are the color of money are supposed to add to the wealth. Oftentimes, one adds a shiny dime to the Hoppin’ John before it is served. Whoever gets the dime is assured of good luck throughout the coming year.

Since this is an annual tradition, I decided to update the post from December 31, 2019 with current photographs and improved text.

Hoppin’ John – What a Funny Name!

I agree that Hoppin’ John is a funny name for a black-eyed pea dish. No one really knows how the name originated, although its history can be traced to the mid-1800’s.

One also has to wonder why Hoppin’ John became associated with good luck and the New Year. The most probable reason was that the slaves in the mid 1800’s would have time off between Christmas and New Years. The reason was that no crops were growing during that period. During the time off, the slaves would celebrate with the foods that were available: black-eyed peas, collard greens and cornmeal (used to make cornbread)!

Whatever its origin or history, Hoppin’ John is firmly rooted in the Southern tradition of welcoming a new year.

The two primary ingredients for Hoppin’ John are black-eyed peas and some form of pork. After that, there are numerous variations of this savory dish:

Hoppin’ John is a relatively easy dish to prepare.

This was probably the most time-consuming part of making the Hoppin’ John, taking about 30 minutes total!

I drained the cooked sausage on paper towels. Next, I pressed each piece with additional paper towels to ensure that I had removed as much grease as possible.

I added the onion, celery and bell pepper to the Dutch oven. I let them cook over medium heat for about five minutes. During that time, I started scraping the browned bits from the bottom of the Dutch oven.

Can the Hoppin’ John be made in an Instant Pot?

Sometimes, I make the Hoppin’ John in my Instant Pot. Once everything is combined, I close the vent and select high pressure for 15 minutes. After 15 minutes, I let the Instant Pot depressurize naturally.

Can ham or another type of sausage be used?

I’ve used both ham and andouille sausage in the past when making the Hoppin’ John. Both will work. However, I think that the smoked sausage produces the best flavor.

Can the Hoppin’ John be made as a vegetarian dish?

You can certainly omit the sausage or other meat when making the Hoppin’ John. Also substitute either water or vegetable broth for the chicken broth.

The leftovers from this recipe are excellent. Just refrigerate them for up to 3 days and reheat in the microwave or on the stovetop.

Watch my Web Story Showing How I Made This Delicious Recipe

If you liked the recipe for One Pot Southern Hoppin’ John, please consider rating it and leaving a comment. I’d love to know how you liked it! 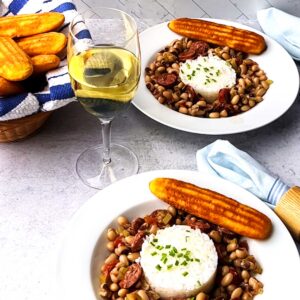