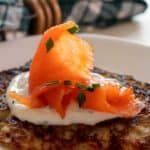 What better way to celebrate St. Patrick’s Day than with Irish Boxty with smoked salmon? Boxty is a traditional Irish pancake. It is often made with a combination of mashed potatoes and raw grated potatoes mixed with flour, milk, and egg. 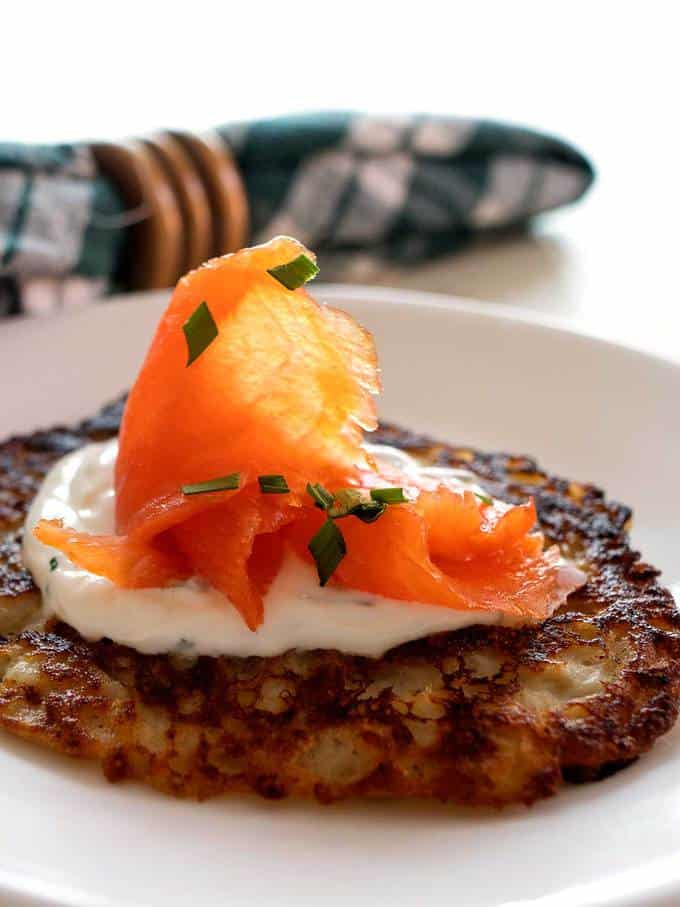 Boxty’s origin dates back to 18th century Ireland where it was so popular that it inspired the following folk ditty: “Boxty on the griddle, boxty in the pan, if you can’t make boxty, you’ll never get your man!”

Boxty should be served hot, and is quite versatile. It can be served at breakfast with butter and sugar, as a side dish for dinner, or as a savory appetizer with sour cream and smoked salmon as you can see here. 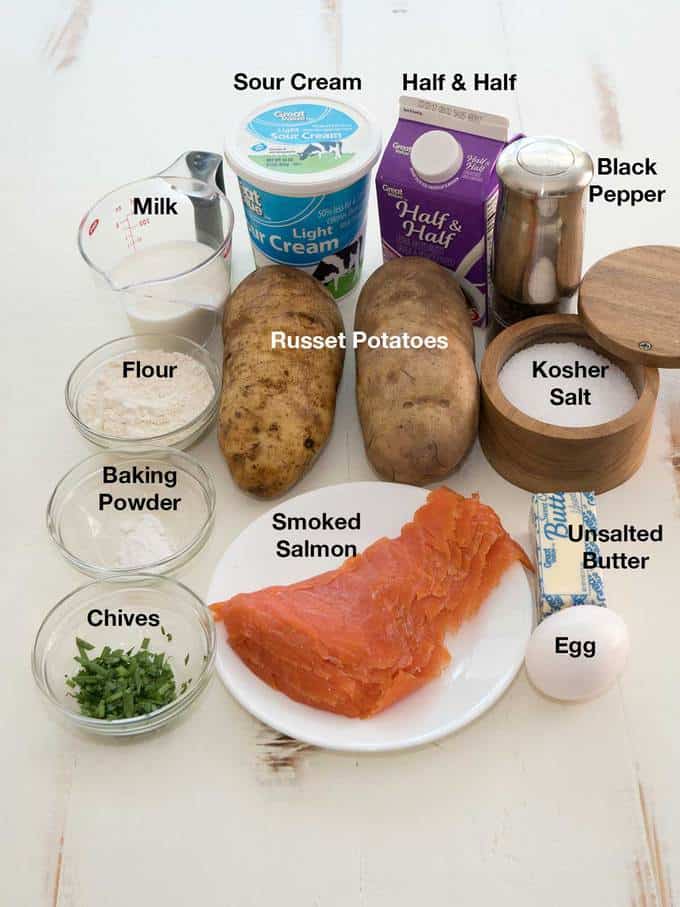 First, I started by whisking some sour cream and chives together in a small bowl for the sauce. Then, I set this aside. 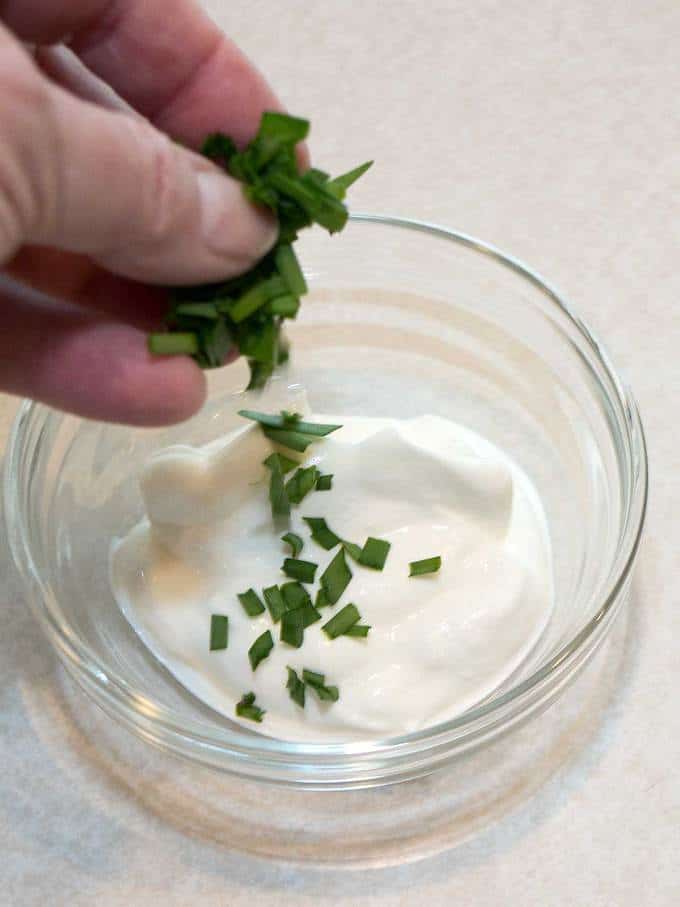 Preparing the Potatoes for the Boxty

Next, I cut up half of the potatoes, and brought them to a boil over high heat in some salted water. I reduced the heat to medium low, and cooked the potatoes, uncovered until they were fork tender. This took about 10 minutes.

When the potatoes were done, I drained them, and returned them to the saucepan (Photo 1). I added some unsalted butter and half and half, and “mashed” the potatoes with my electric mixer (Photo 2). 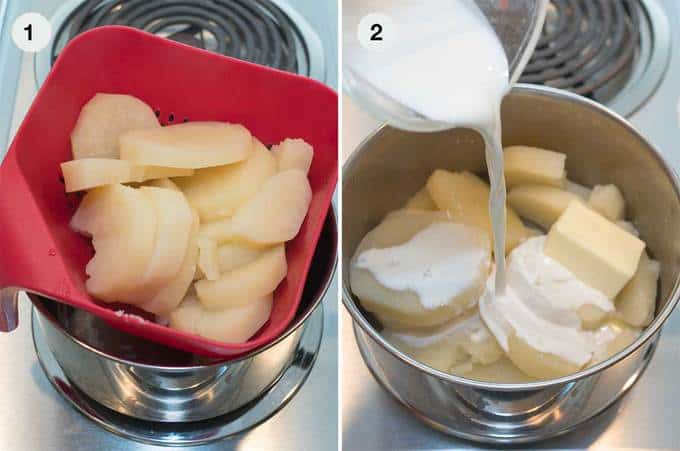 While the potatoes for the mashed potatoes were cooking, I grated the remaining potatoes with my food processor (Photo 3).

Then I transferred the grated potatoes to a wire strainer set over a bowl, and tossed the potatoes with a little bit of Kosher salt (Photo 4). The reason for the salt was to help draw out excess liquid from the potatoes. 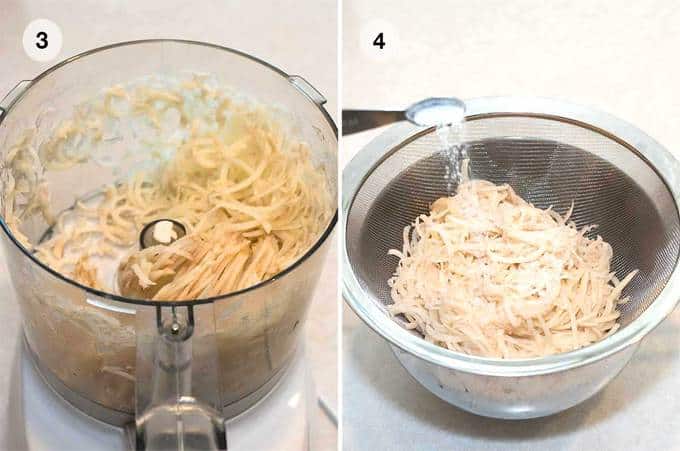 After I had squeezed as much liquid from the grated potatoes as I could, I added them to the mashed potatoes (Photo 5), and stirred to combine the mixture (Photo 6)

I knew from experience that a chemical reaction causes potatoes turn pink shortly after they’re cut. Therefore, I wasn’t concerned when this occurred with the grated potatoes. 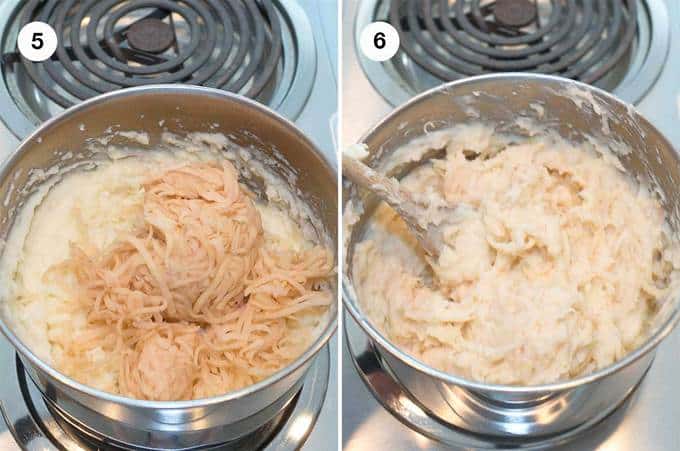 I added the flour, baking powder, salt and pepper to a large bowl, and whisked it to combine the dry ingredients. Then, I added the milk and egg, and whisked the mixture until it was smooth. Finally, I stirred the potato mixture into the flour/milk mixture. 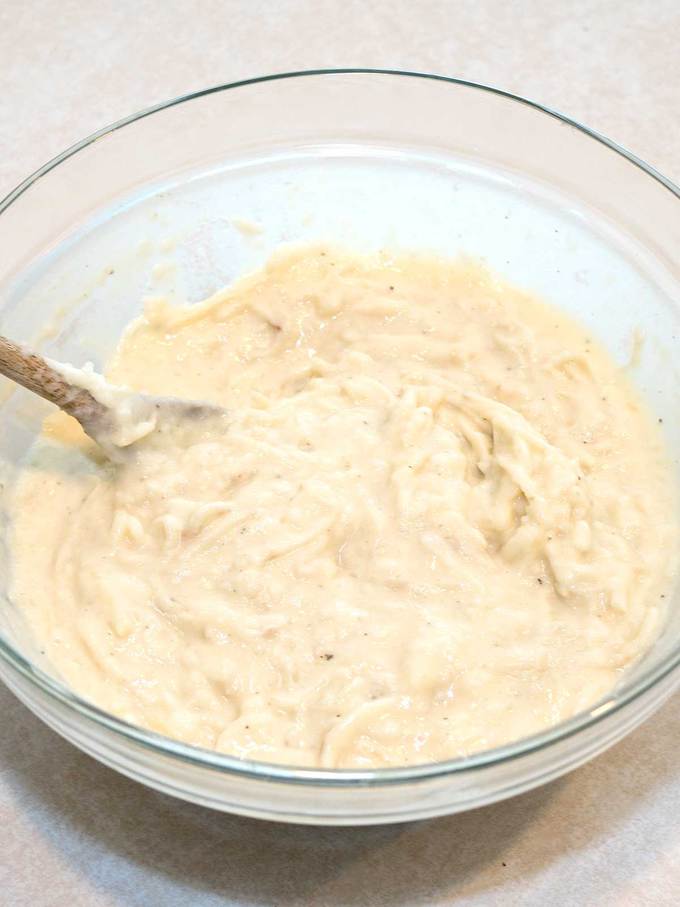 I heated some canola oil and butter in a 12-inch nonstick skillet over medium heat. When the oil started to shimmer, I dropped about ¼ cup of the batter in the skillet using my large ice cream scoop. I used the back of the scoop to flatten the batter into ¼-inch thick rounds (Photo 7).

I transferred the Boxty to a paper towel lined plate to drain. Then, I put them in a 200° F oven to keep warm while I finished cooking the Boxty.

I served the warm Boxty with a dollop of the sour cream and chive sauce, and slices of smoked salmon. Yum! 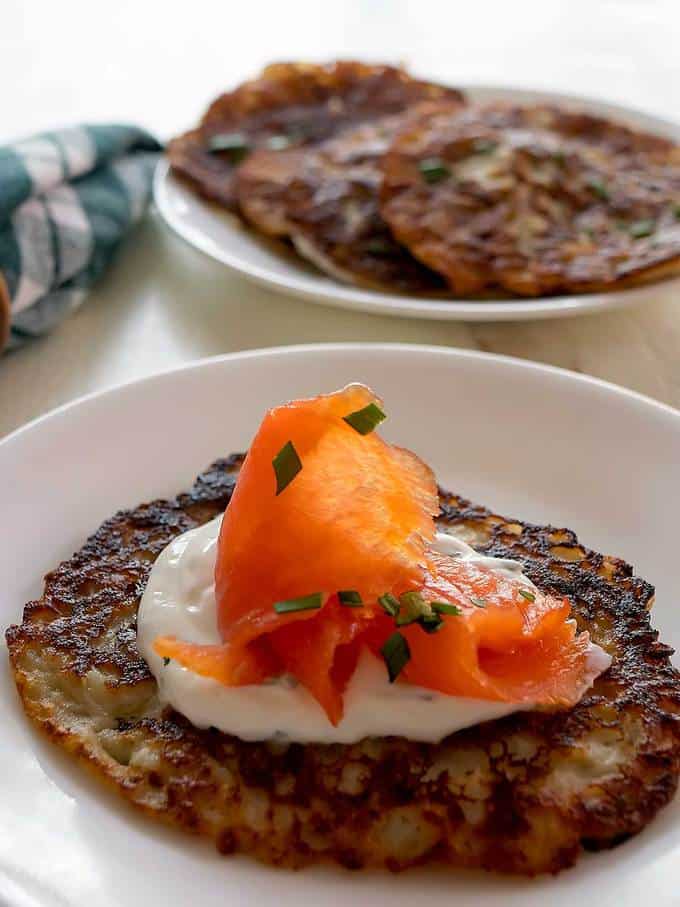 This is a re-post from February 19, 2017! It’s the same amazing recipe, but with updated text and photos.

I hope you liked the recipe for the Irish Boxty with Smoked Salmon as much as I do. If so, please consider rating it and leaving a comment. Also, if you’d like to receive notifications of new posts by email, enter your email address in the Subscribe box. 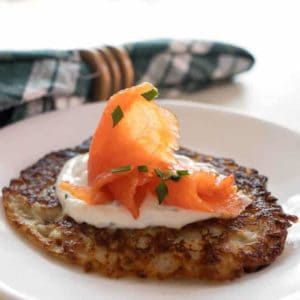