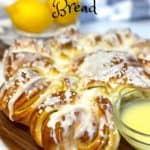 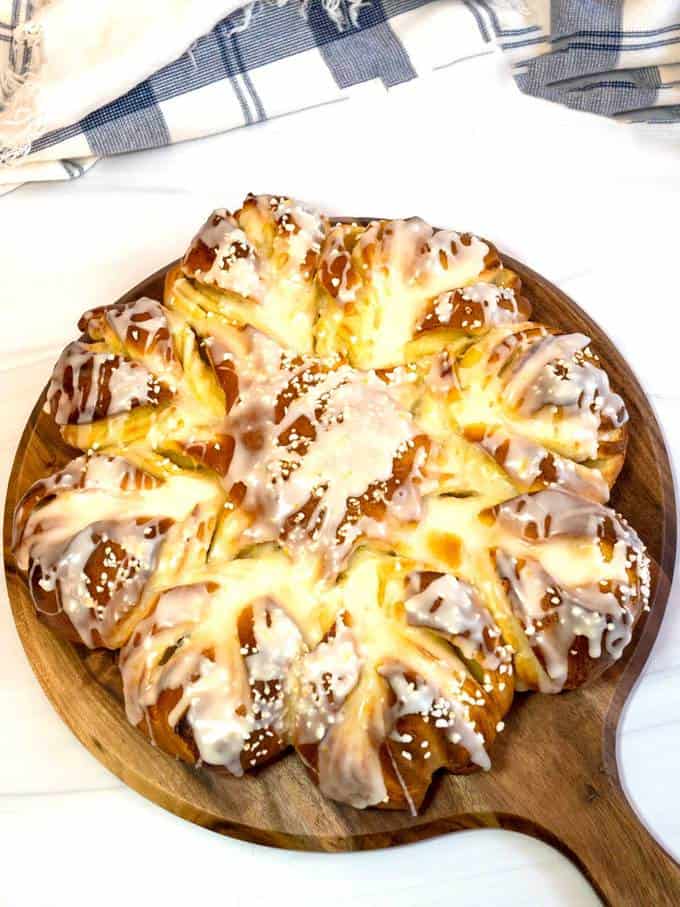 While Susan and I were in Paris, we took a Bread-making class where we learned how to make a chocolate filled Snowflake Bread. The bread was topped with pearl sugar.

Susan and I thought that it would be fun to do a variation using lemon curd as the filling instead of chocolate and topping it with pearl sugar and a lemon glaze. The result was amazing!

For the sweet dough, I used all-purpose flour as opposed to bread flour. I included granulated sugar to not only provide the sweetness, but also help feed the yeast.

For richness, I added sour cream, butter and an agg. 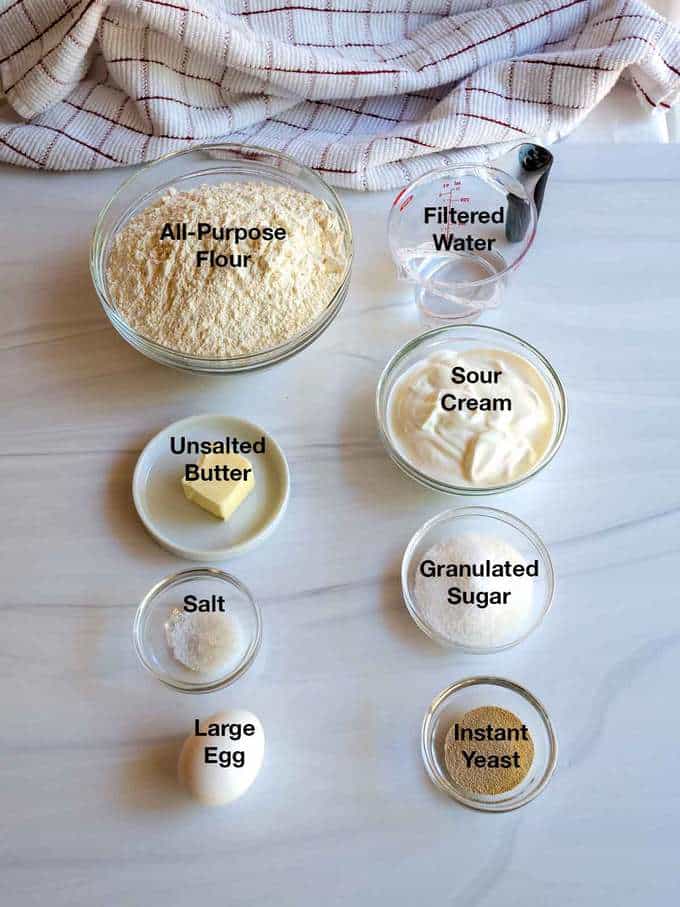 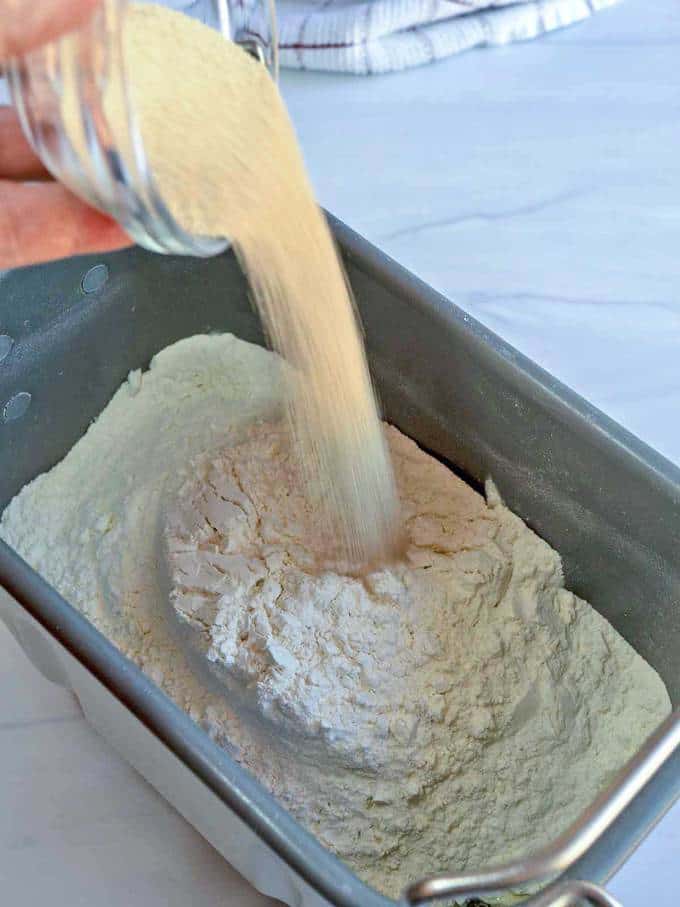 While the bread machine was doing its magic, I made the lemon curd from my tried and true Classic English Lemon Curd recipe.

This provided the two basic ingredients – sweet dough made in the bread machine and lemon curd! I divided the dough into four equal parts. 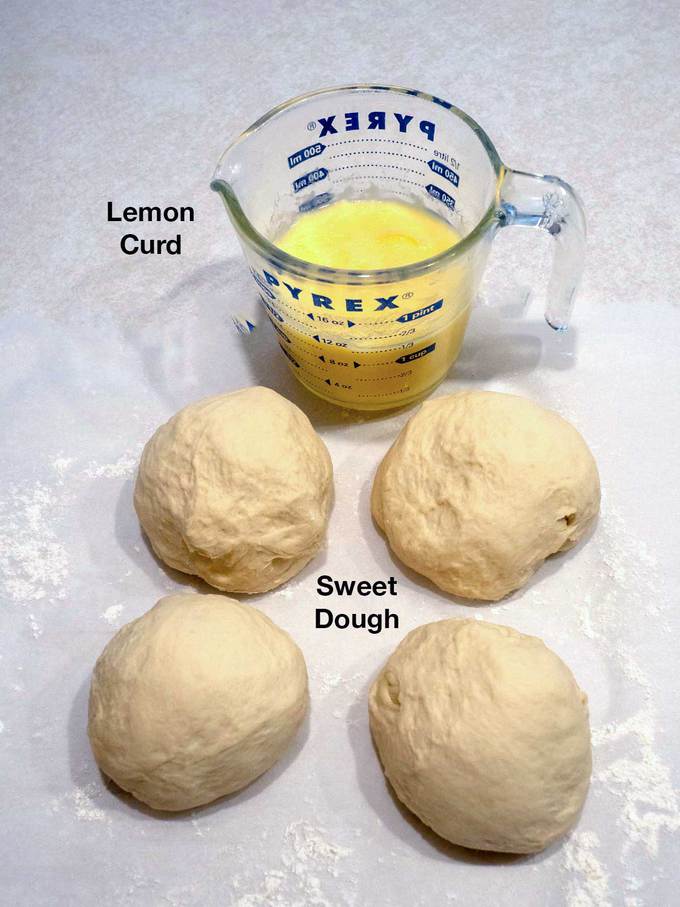 To make the Lemon Curd Star Bread, I started by rolling each of the pieces of dough into roughly a 12-inch circle. The dough had a tendency to spring back when I rolled it, so I would roll it a little bit, let it rest and then roll it more. 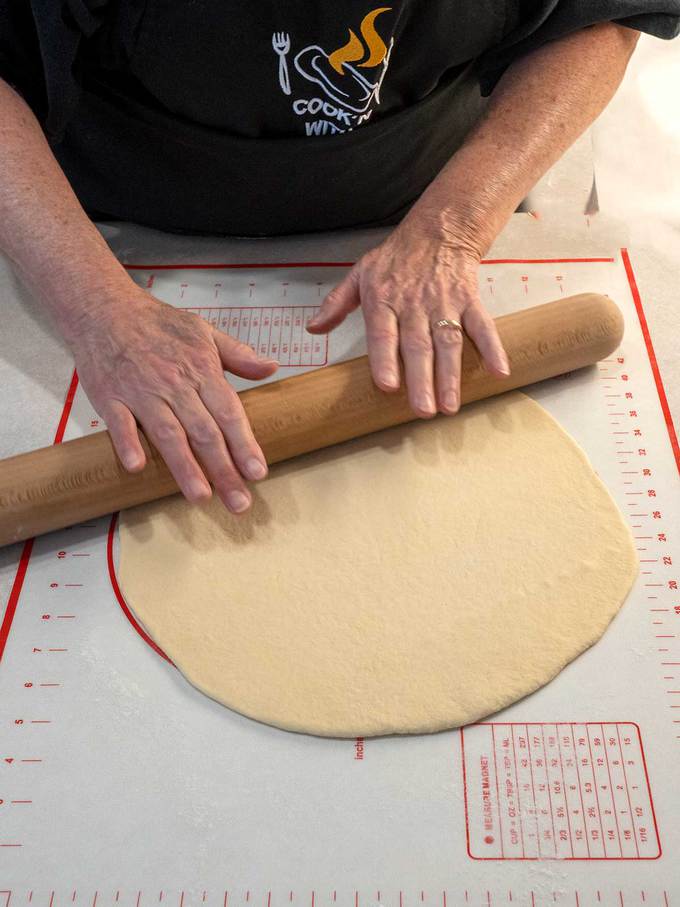 Then, I transferred one of the dough circles to an inverted baking sheet that was lined with a silicone mat (Photo 1). I spread the circle of dough with ⅓ of the lemon curd (Photo 2).

After that, I repeated this twice, and placed the final piece of dough on top on top (Photo 3).

Once the star bread was assembled, I trimmed it to 10-inches using an inverted cake pan (Photo 4). 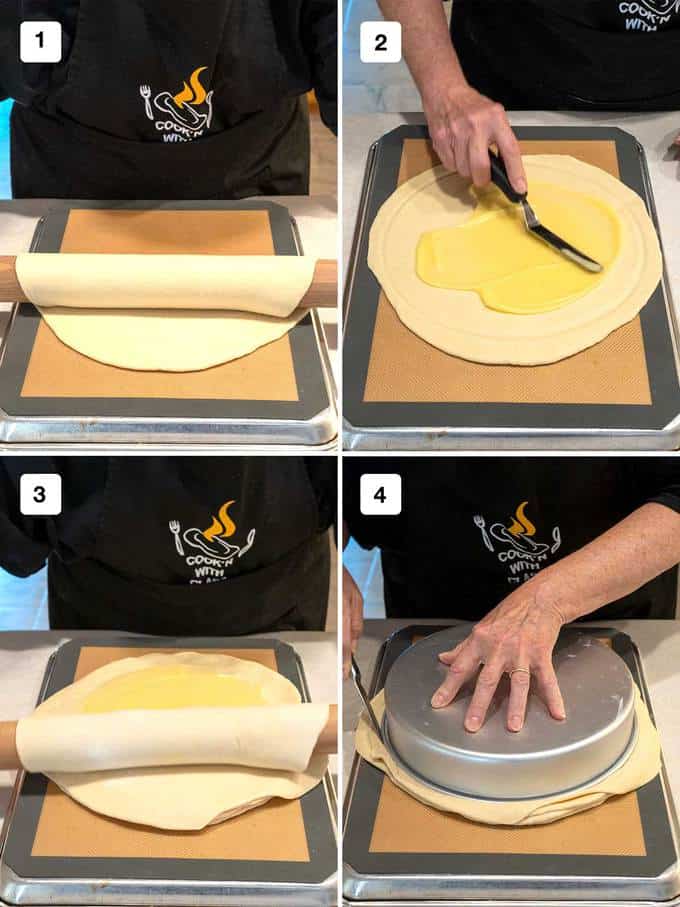 I ended up total of sixteen cuts. At this point, I removed the bowl from the top of the dough. 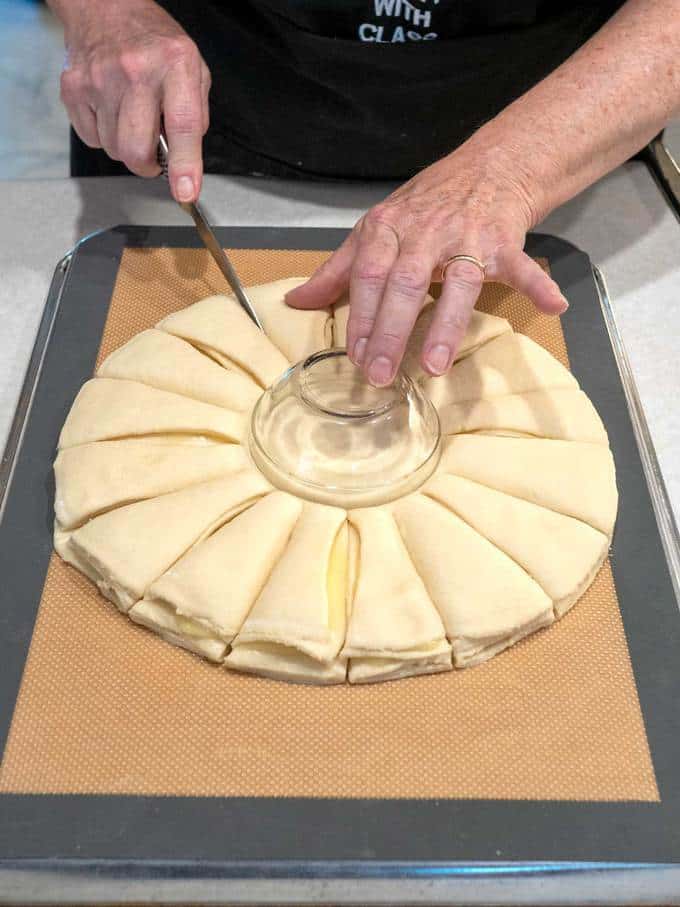 To turn the dough into a stars, I carefully picked up two pieces of adjacent dough (Photo 5) and twisted them twice away from each other (Photo 6). Then, I pressed the outer edges of the two pieces together (Photo 7). I made sure that the edges were well sealed (Photo 8). 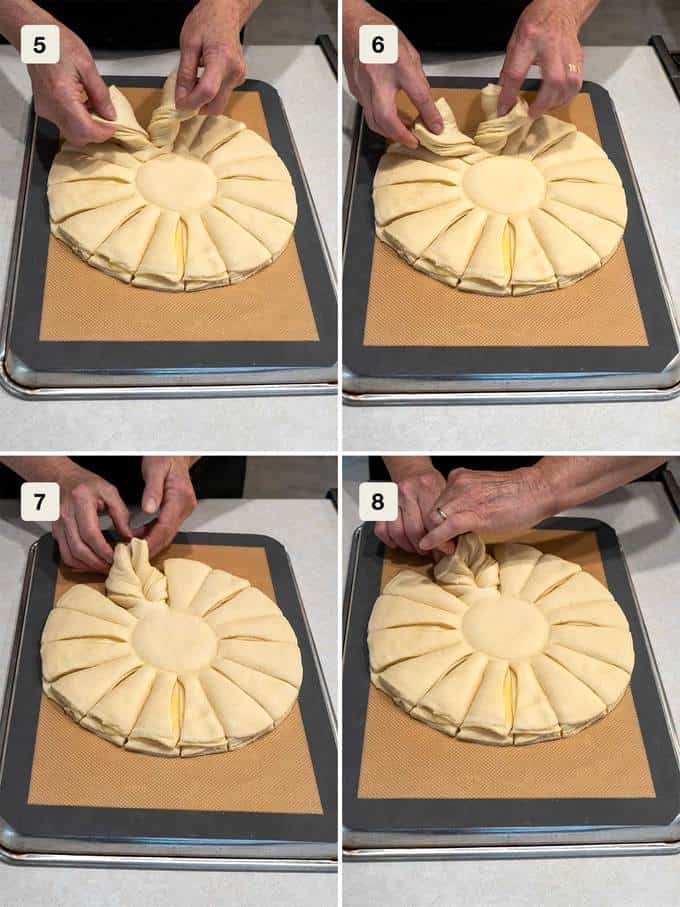 I repeated this with the remaining seven pairs of dough wedges. Voila, Lemon Curd Star Bread!

For the finishing touch, I brushed the bread with egg wash and sprinkled on some pearl sugar. 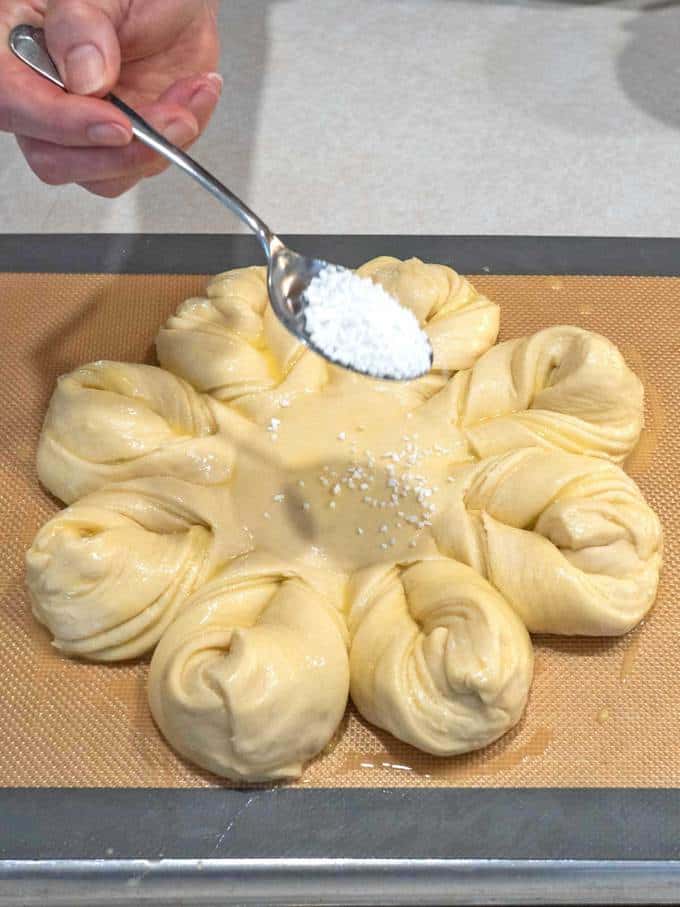 I popped the lemon curd star bread into a preheated 350°F oven for 23 minutes. After 23 minutes, the bread was golden brown and perfectly cooked. 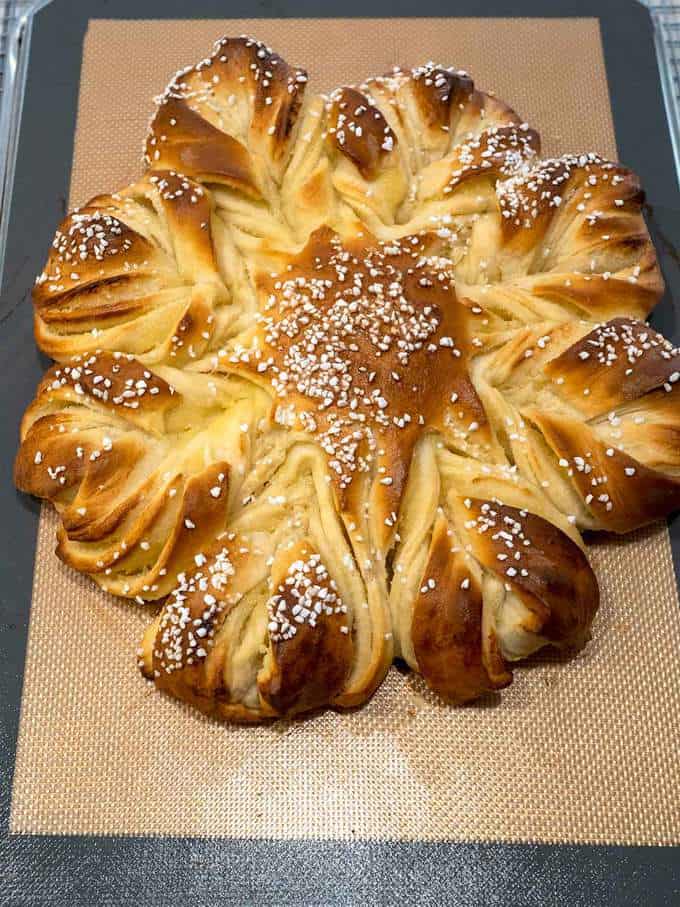 While the bread was cooking, I made the lemon glaze, which consisted of confectioners’ sugar and fresh lemon juice.

I added the sugar and lemon juice to a bowl. Then, I beat the mixture on high with my electric mixer until the icing was smooth and of a perfect consistency. 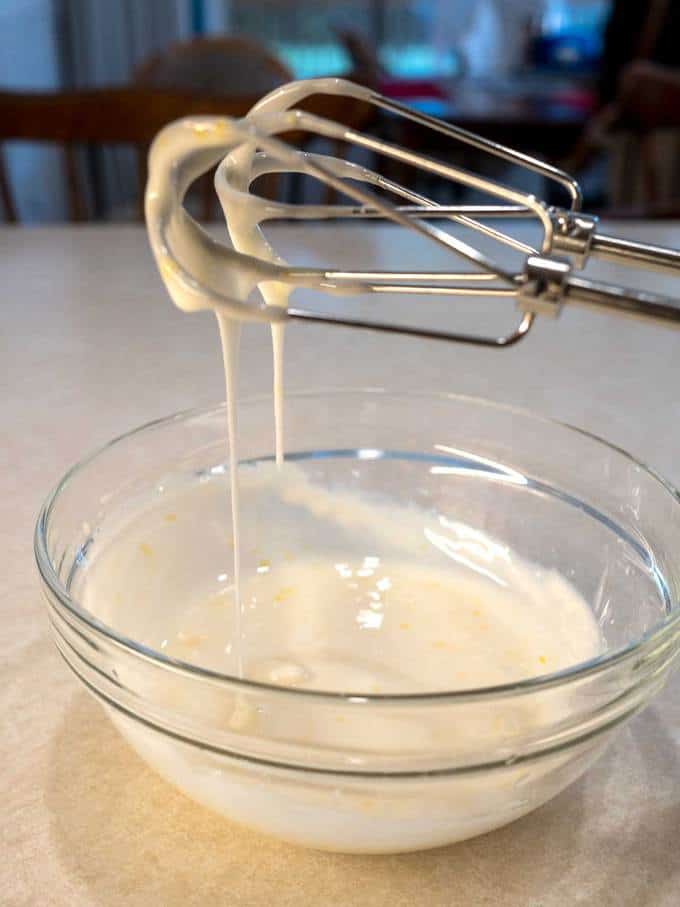 After I removed the bread from the oven, I carefully transferred it to a wire cooling rack. Then I drizzled the icing over the still warm bread. 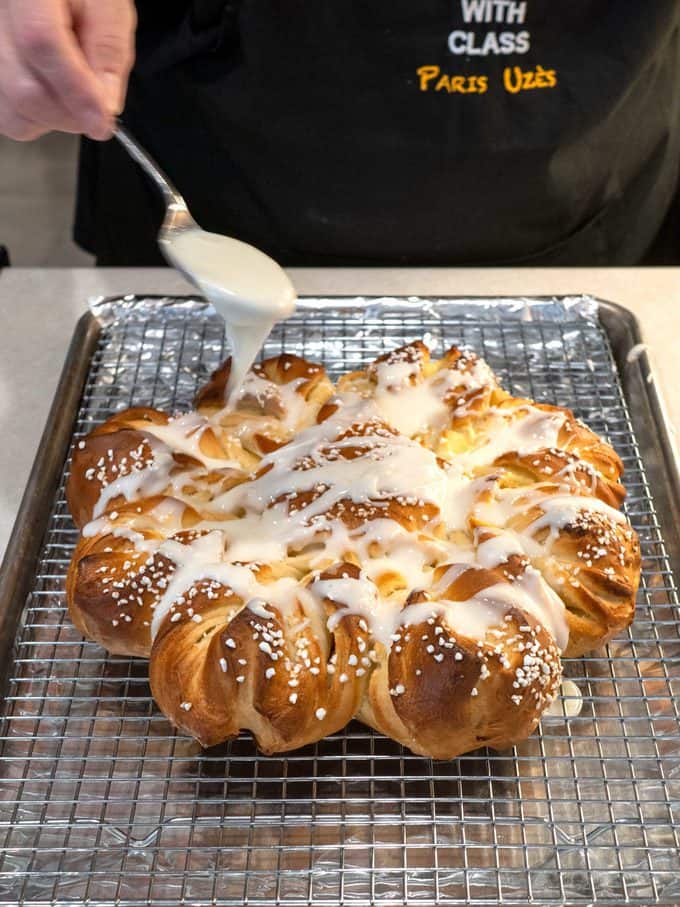 Once the lemon curd star bread had cooled, I pulled a piece off for the first taste. Oh my – the combination of the tart lemon curd and sweet bread with icing was amazing. 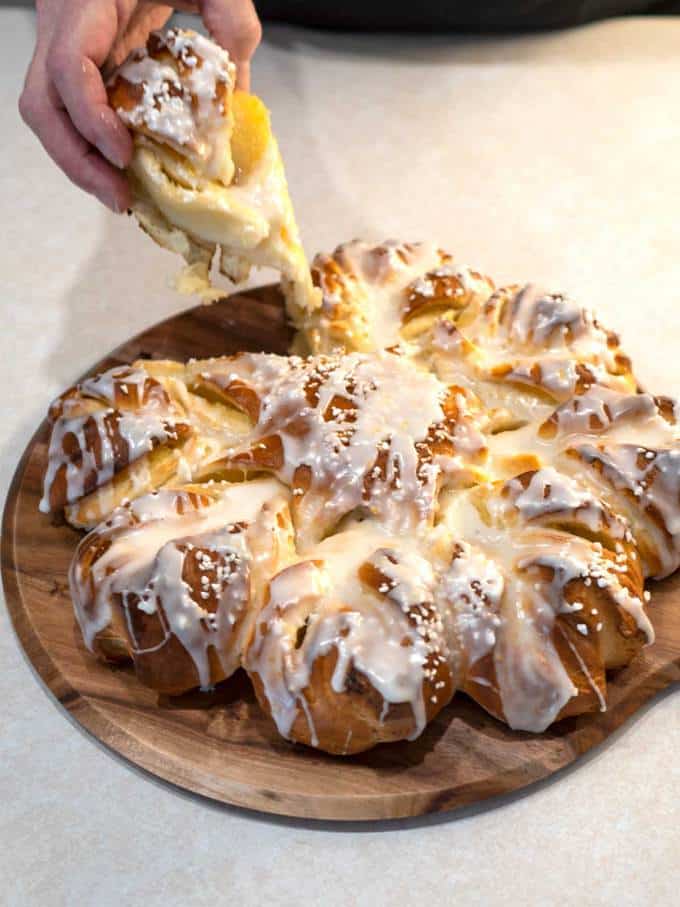 I served the Lemon Curd Star Bread with additional lemon glaze on the side. To say that the bread was amazing is definitely an understatement. It was show-stopping beautiful. The pull-apart pieces had the perfect amount of sweet and tart and were amazingly delicious. Yum! 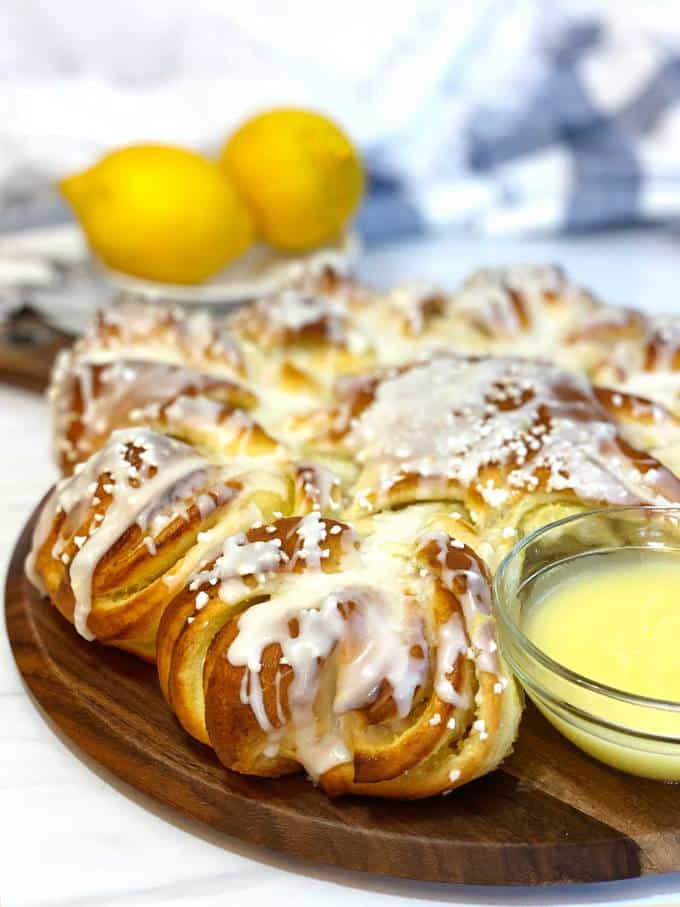 I hope you liked this recipe for Lemon Curd Star Bread as much as I do. If so, please consider rating it and leaving a comment. Also, if you’d like to receive notifications of new posts by email, ever your email address in the Subscribe box. 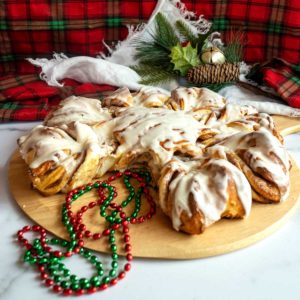 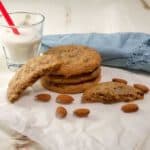 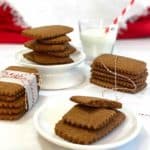