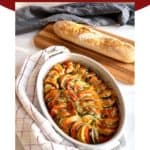 Make-Ahead Vegetable Tian is as delicious to eat as it is beautiful to present. Imagine layered overlapping alternating potatoes, zucchini, and tomatoes sitting atop luscious caramelized onions topped with Gruyère cheese. The vegetable tian is the perfect side dish to serve for a special occasion or anytime for that matter. What’s even better is that the leftovers, if any, are just as amazing.

What is a Tian?

You may or may not have ever heard of a tian.

The name hails from Provence, where a tian is an earthenware vessel used for cooking and serving. A tian is also a dish with layers of alternating vegetables. Unlike ratatouille, the layers of vegetables are typically upright, creating a stunning presentation.

Even though it might look complicated, the vegetable tian uses simple ingredients.

I spent some time researching different recipes on the Internet for the vegetable tian. After a fair amount of experimentation, I was able to perfect this dish.

The result, at least for me, was that the potatoes were not sufficiently cooked in the final dish. Also, because I wanted to be able to make the vegetable tian ahead of time, I wanted to keep the potatoes from discoloring. Therefore, I cooked the potatoes before assembling the tian.

Another thing that I did differently was to follow Julia Child’s advice and salt the tomatoes and the zucchini ahead of time. The salt helps to draw out excess moisture and keeps the vegetable tian from being soupy. It also flavors the tomatoes and zucchini.

I started by slicing the onions. Then, I heated some olive oil in a large skillet over medium heat and added the onions. I sprinkled on some salt, dried thyme, and pepper, and stirred the onions.

After 10 minutes, I removed the paper towel and lid and continued cooking the onions for an additional 10 minutes until they started to caramelize. Finally, I added the minced garlic and cooked the mixture for about 30 seconds until the garlic was fragrant.

I removed the onions from the heat and transferred them to a 2 ½ quart casserole dish.

The Rest of the Vegetables

To start with, I cut the potatoes, tomatoes, and zucchini into ¼-inch slices.

Layer slices of tomato, potato and zucchini alternately on top of the onions, fitting the layers upright. I covered the onions completely with the layers.

At this point, the vegetable tian could either be baked or be refrigerated for later baking. Because I wasn’t ready to bake it, I placed the casserole in the refrigerator.

I preheated the oven to 375°F. I baked the vegetable tian covered for 40 minutes. After 40 minutes, I removed it from the oven and removed the aluminum foil. I sprinkled the top with the shredded Gruyère cheese.

I returned the casserole uncovered to the 375°F oven for another 30 minutes. After the additional 30 minutes, the cheese was melted and the vegetables were perfectly cooked.

To say that the Make-Ahead Vegetable Tian was a masterpiece to look at and to taste is an understatement. It was absolutely delicious. In addition, the leftovers reheated beautifully. Yum!

Is there a substitute for the Gruyère Cheese in this recipe?

Leftovers, if any are amazing. I like to reheat them covered in the microwave for several minutes until heated through.

If you liked the recipe for Make-Ahead Vegetable Tian, please consider rating it and leaving a comment. I’d love to know how you liked it! 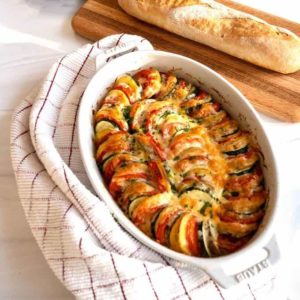 Make-Ahead Vegetable Tian is as delicious to eat as it is beautiful to present. Imagine layered alternating potatoes, zucchini and tomatoes sitting atop luscious caramelized onions topped with Gruyère cheese. The vegetable tian is the perfect side dish to serve for a special occasion or anytime for that matter. What's even better is that the leftovers, if any are just as amazing.
5 from 2 votes
Print Pin Rate
Course: Side Dish
Cuisine: French
Prep Time: 15 minutes
Cook Time: 1 hour 30 minutes
Salting Time: 30 minutes
Total Time: 2 hours 15 minutes
Servings: 6 servings
Calories: 255kcal
Author: Chula King