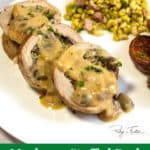 Mushroom Stuffed Pork Tenderloin with Madeira Cream Sauce is absolutely delicious and is guaranteed to produce the WOW factor! It makes an elegant entrée for your special Holiday dinner but is equally good during the week. 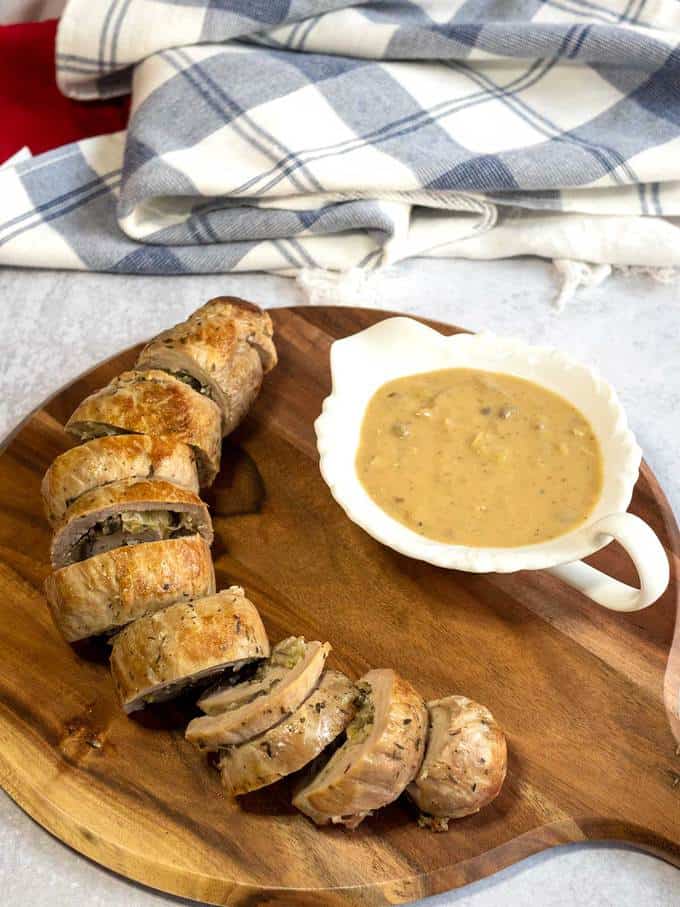 This is one of my favorite things to serve for a special dinner. It does take a bit of time to put together. However, it’s totally worth it!

First, I prepared a dry rub for the pork consisting of Kosher salt, dried thyme, freshly ground black pepper, and minced garlic. After I had trimmed the tenderloin, I patted it dry, and rubbed the dry rub over all sides. Then, I placed the seasoned pork in a Ziploc bag and refrigerated it for several hours. 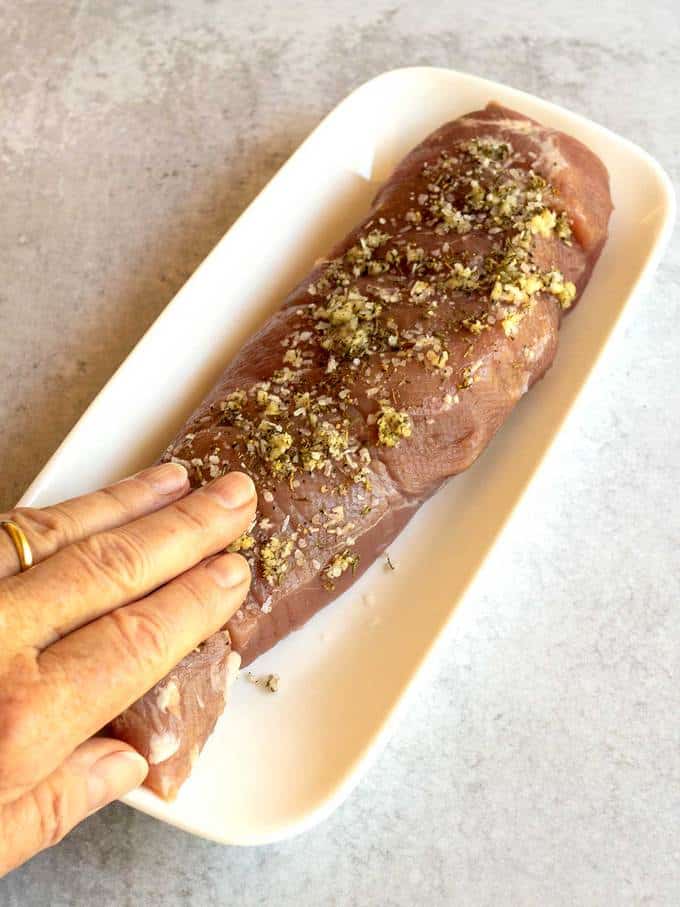 I started by finely chopping the mushrooms and squeezing as much liquid as possible from the mushrooms. First, I squeezed them in my hands, and then in paper towels. 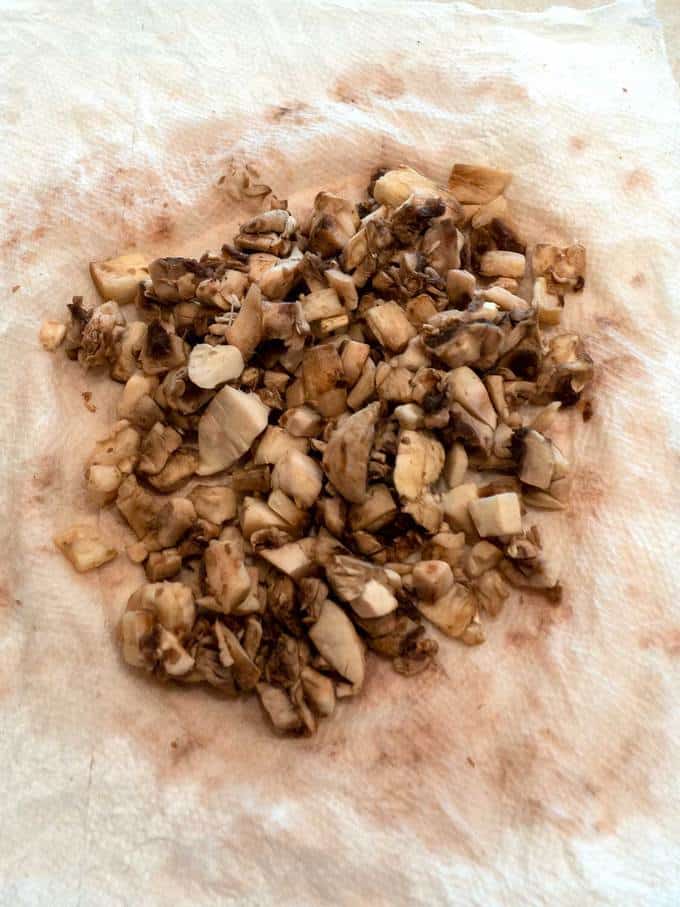 Next I added the minced garlic, salt and pepper and cooked it for about 30 seconds until the garlic was fragrant. I stirred in the cream (Photo 3). Finally, I cooked the mixture for about 5 more minutes until vegetables were soft and most of the cream was absorbed (Photo 4). 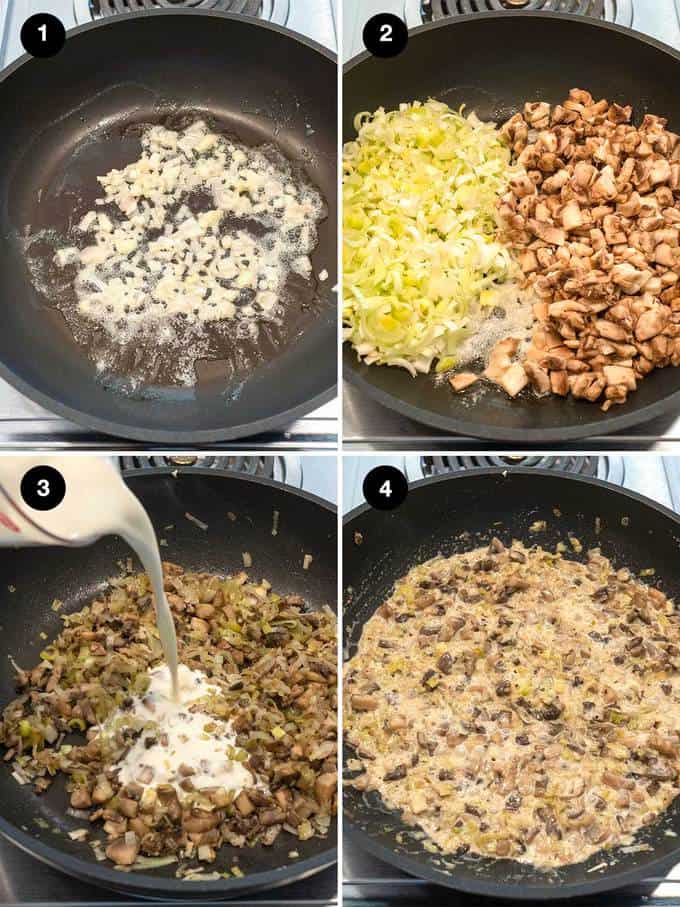 After the mushroom mixture had cooled, I turned my attention to the pork which I had removed from the refrigerator. I rinsed it well to remove the dry rub and patted dry with paper towels.

Then, I carefully butterflied the tenderloin with a sharp knife (Photo 5). I took care not to entirely cut it in half. Next, I placed it between two pieces of plastic wrap and pounded it to a thickness of about ¼-inch (Photo 6). 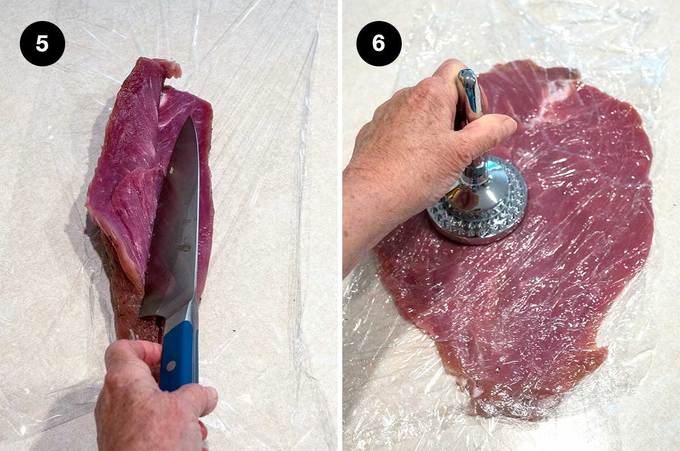 Once I had fully rolled the tenderloin up jellyroll fashion, I place it on pieces of cooking twine the I had placed about 1 ½-inches apart (Photo 9). Finally, I tied it the rolled pork with cooking twine (Photo 10). 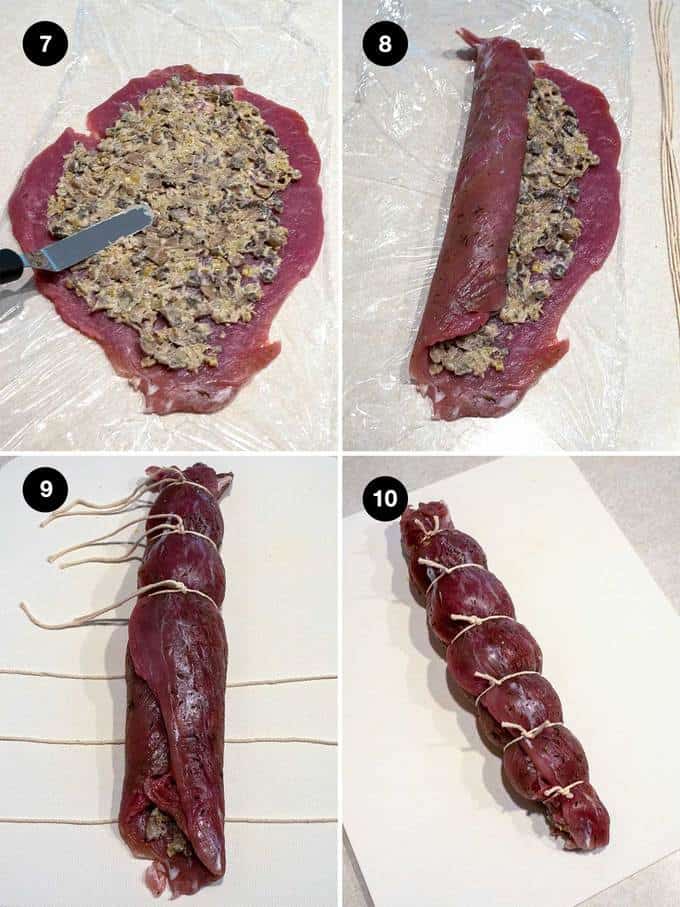 To cook the pork, I started by browning it in a little olive oil in an oven proof skillet over medium high heat. 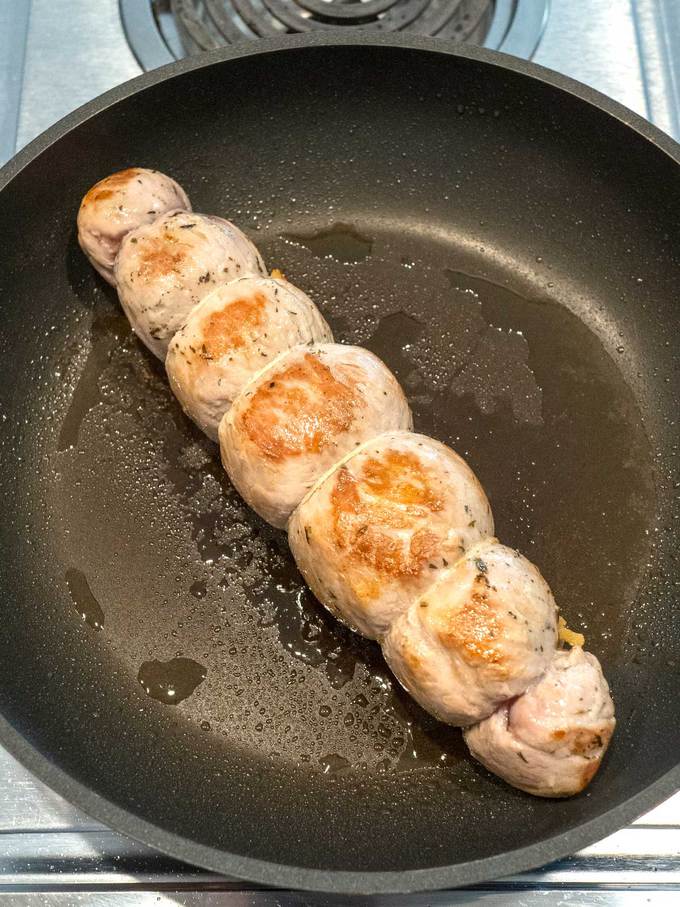 After the tenderloin was browned on all sides, I placed the skillet into a 350° F oven until the pork reached an internal temperature of 170° F. This took about 20 minutes. I removed the pork from the oven, placed it on a cutting board and tented it with aluminum foil. 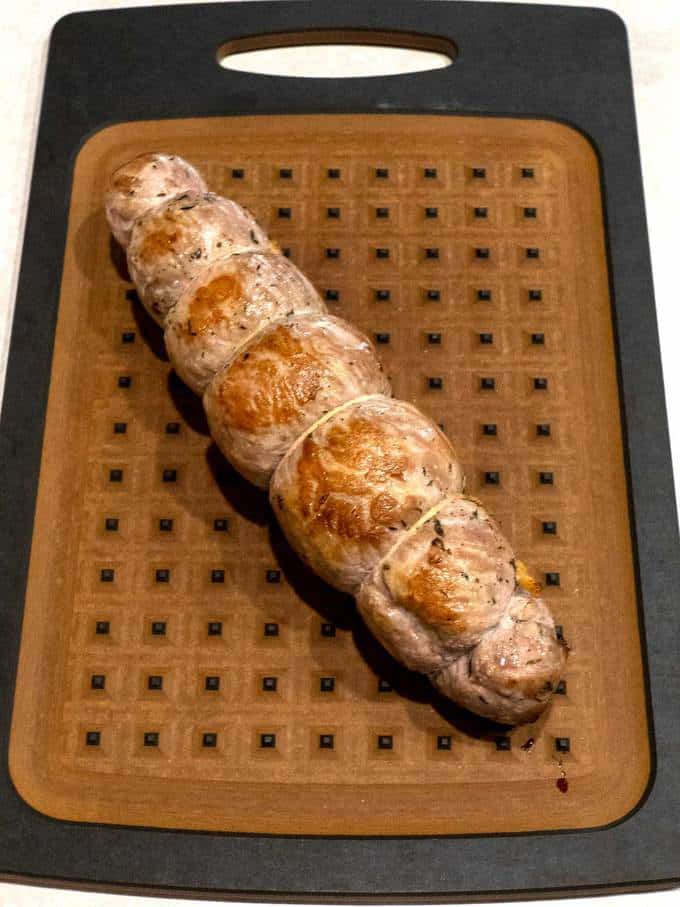 While the pork was cooking, I focused on the Madeira Cream Sauce. I added chicken broth and Madeira to a small saucepan and boiled the mixture over medium high heat until it had reduced to about 1 cup. This took about 20 minutes. 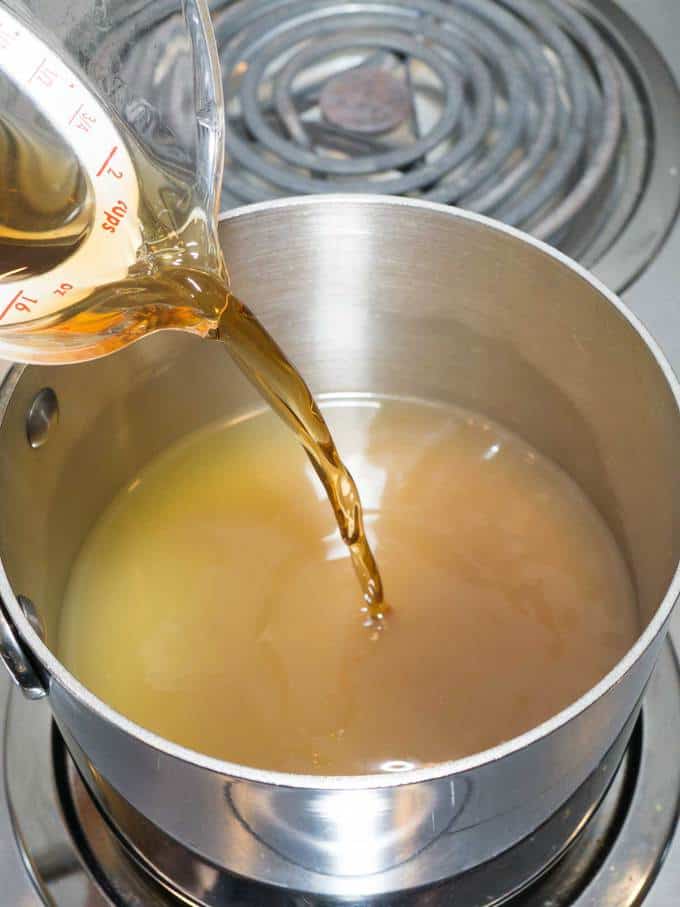 To finish the sauce, I returned the skillet that the pork was cooked in to stove over medium heat, added the flour and stirred it until smooth. I let the flour cook for several minutes until it was lightly browned (Photo 11). Then, I added the reduced broth/Madeira sauce and remaining mushroom mixture (Photo 12).

I brought the sauce to a boil to allow it to thicken, scraping up any browned bits. Finally, I added the cream and remainder of the mushroom stuffing (Photo 13).  After another few minutes, the Madeira cream sauce was ready (Photo 14). 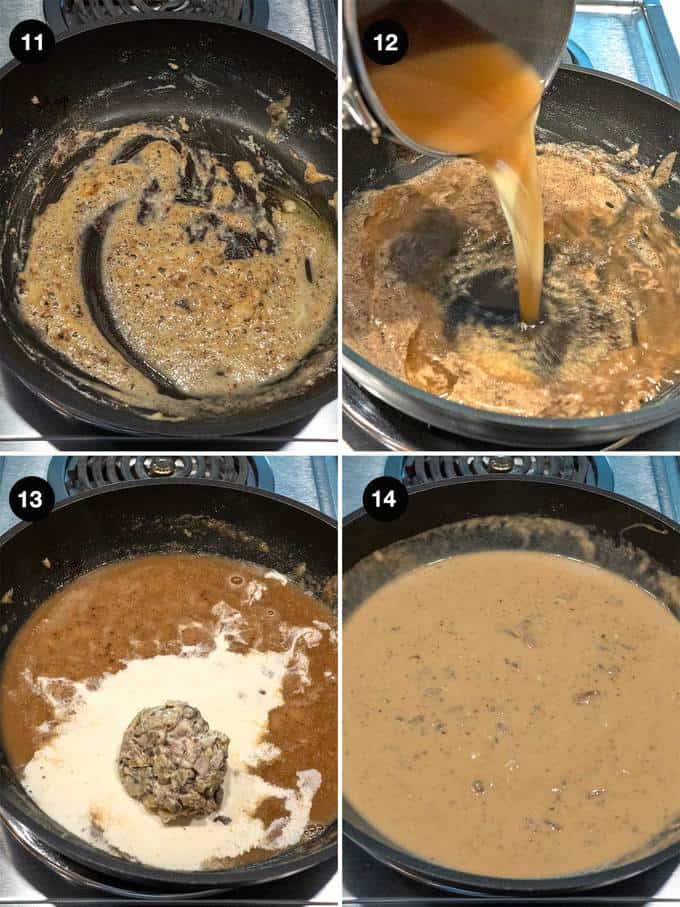 Finally, it was time to eat! I removed the cooking twine from the pork tenderloin. Then, I sliced the tenderloin into 1 ½-inch slices. 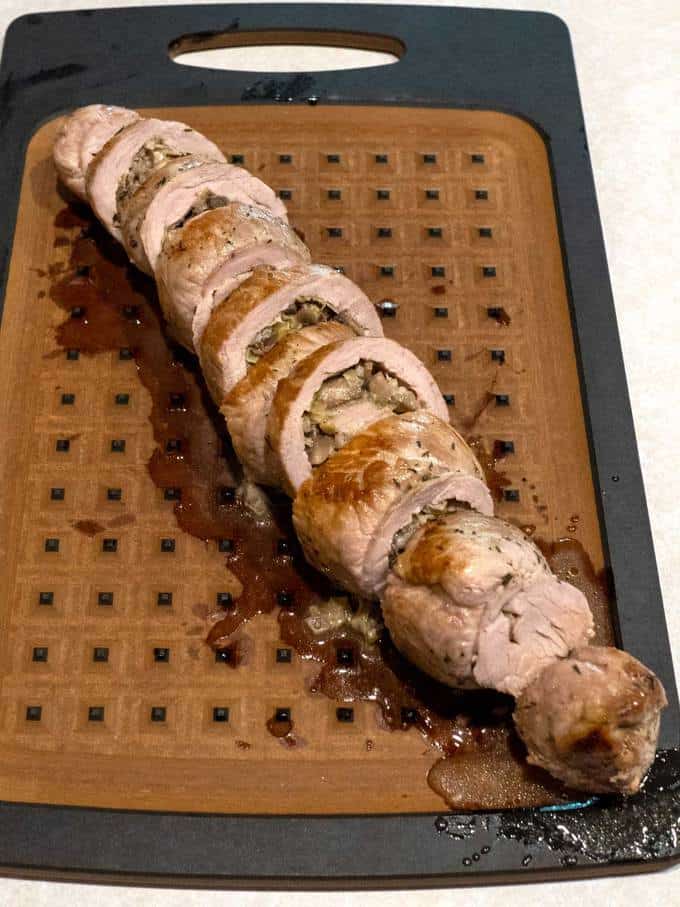 I drizzled the sauce on the pork, and served it with Easy Stove Top Roasted Potatoes and fresh white acre peas.

I won’t lie – this was pretty labor intensive. However, it was well worth the effort. The pork was fork tender and perfectly seasoned. The mushroom stuffing was out of this world, and the sauce beyond compare. What an elegant meal for any occasion. Yum! 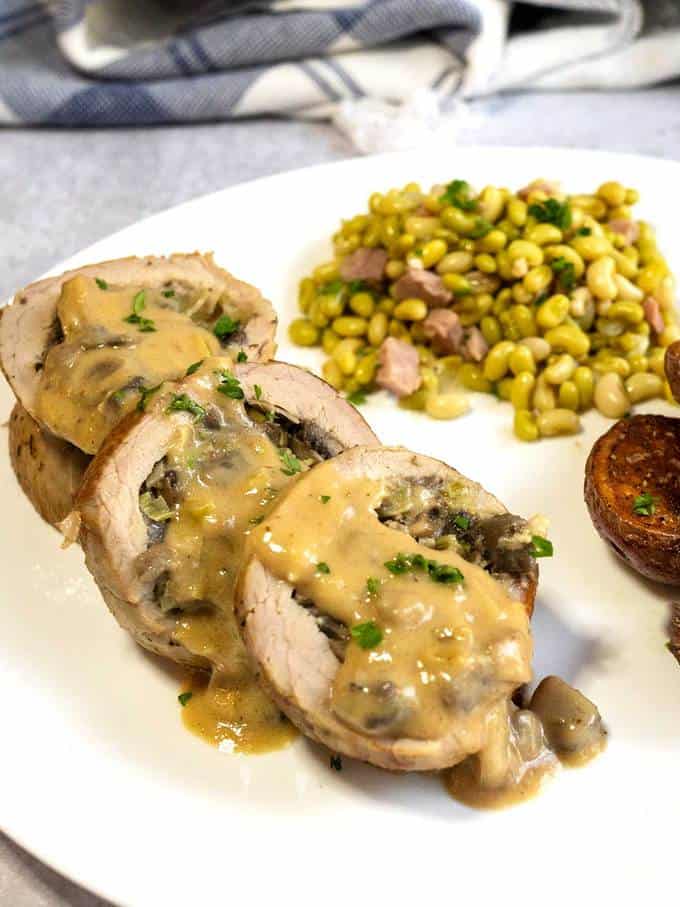 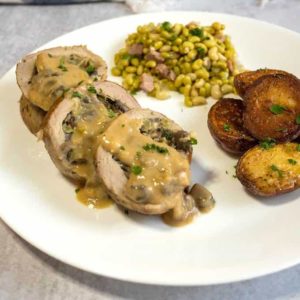