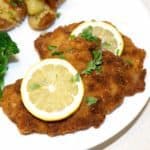 Pork Schnitzel or Schweineschnitzel is a quick and easy recipe to prepare for those busy days where you want an amazing dish. Thin pieces of pork tenderloin are breaded and fried to perfection.

Since then, I’ve been making Schweineschnitzel with pork tenderloin. It’s consistently perfectly breaded, perfectly fried, perfectly crispy, and perfectly delicious. It makes not only an incredible meal, but also one that’s quick and easy to prepare.

Why You Should Make This Recipe

As I’ve already indicated, the pork schnitzel is absolutely delicious. However, other reasons the you should make this recipe include the following:

This recipe uses simple ingredients to produce an awesome dish.

One of the key elements of pork schnitzel is using thin pork.

That’s it for the preparation of the pork!

The most time-consuming part of this recipe is actually breading the pork.

When the pork was done, I transferred it to a plate lined with paper towels and allowed it drain while I cooked the rest of the pork.

I garnished the Pork Schnitzel with lemon slices and minced fresh parsley, and served it with Pommes Fondants and steamed fresh broccoli.

What other cut of pork can be used in this recipe?

I really like using the pork tenderloin in this recipe. However, I’ve also used pork loin in the past. It’s not quite as tender, but works well.

At what point can this recipe be made in advance?

Once the pork has been breaded and put into the refrigerator, it can sit for several hours before cooking. The breaded pork can also be stored for a day or two in a Ziploc bag.

If there are leftovers of the cooked pork schnitzel, you can store them, covered in the refrigerator for a day or two. My preference is to reheat the schnitzel in a 350°F oven for 10 to 15 minutes or until warmed through.

Panko breadcrumbs work well in this recipe when substituted for the plain breadcrumbs.

What side dishes go well with the pork schnitzel?

Pork schnitzel is quite versatile in terms of side dishes. I like to serve steamed vegetables along with some type of starch. For the starch, Betsy’s Potatoes, Roasted Potatoes with Onions, Instant Pot Mushroom Risotto, Southern-Style Scalloped Potatoes, Easy Stove Top Roasted Potatoes, and Grated Potatoes Galettes all go well.

I first posted this awesome recipe on February 23, 2016. Since then, I’ve made it a number of times. You should make it as well! 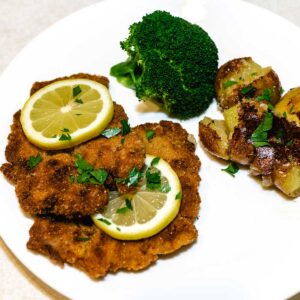