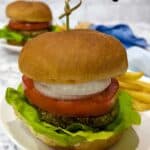 Tasty Meatless Burgers are packed with healthy veggies and are way better than store-bought. In fact, they’re the best meatless burgers that we’ve ever tried. Unlike other meatless burgers that attempt to mimic real meat, these amazing burgers highlight just how delicious vegetables can be.

I used an America’s Test Kitchen recipe as the inspiration for these burgers.

However, the time spent making these meatless burgers was well worth it.

A lot of veggie burger recipes use some sort of beans as the main ingredient. In addition, the store-bought varieties tend to be a chemistry set in terms of the ingredients.

These burgers, however, do neither. Rather, they include an assortment of different vegetables complimented by a handful of other ingredients.

Remember that I said that making the mixture for these burgers was not quick? The reason was that there were different steps in preparing the ingredients.

I used dried lentils in this recipe. To make the lentils usable, they needed to be cooked.

Therefore, I cooked the lentils in salted water until they were tender. This took about 25 minutes.

Then, I drained the lentils in a wire-mesh strainer and transferred them to a paper towel lined baking sheet to dry out.

While the lentils were cooking, I turned my attention to the bulgur.

Before the bulgur could be usable, it needed to be softened. To do this, I microwaved some water until it was boiling. Then, I added some salt and the bulgur wheat.

After giving the bulgur a stir, I covered the dish and let it sit for about 20 minutes until the water was absorbed. Then, I drained the bulgur in a wire-mesh strainer.

I used the back of a large spoon to press as much of the water as possible out of the bulgur.

Next, I heated some vegetable oil in a large non-stick skillet over medium-high heat. Once the oil was hot, I added the onions, leeks, celery and garlic.

I cooked the vegetables, until they started to turn slightly brown. This took about 10 minutes.

Once the vegetables were cooked, I transferred them to a rimmed baking sheet to allow them to cool.

For the mushrooms, I added some more vegetable oil to the skillet used for the veggies over medium-high heat. Once the oil was hot, I added the sliced cremini mushrooms. I cooked them, stirring occasionally until all of the liquid had evaporated. This took about 12 minutes.

When the mushrooms were cooked, I added them to the rimmed baking sheet with the veggies.

Now was the time to actually make the meatless burger mixture.

First, I added the lentils, bulgur wheat, cooked veggies and mushrooms to a large bowl. Then, I added the cashews that I had finely chopped in my food processor along with the mayonnaise.

Next, I stirred everything together.

There was a lot of the mixture. Therefore, I transferred half of it to my food processor that I used to chop the cashews.

I pulse processed the mixture until it was coarsely chopped. This took about 15 pulses. I transferred this to a large bowl and processed the remaining mixture.

After transferring the remaining processed mixture to the bowl, I added the Panko breadcrumbs, salt and pepper.

I stirred the mixture together until everything was well blended. At the end, I actually used my hands for the final blending.

Before forming the patties, I weighed the mixture. This is something that I routinely do to ensure that each of the patties was the same size. I know that I’m a total nerd here!

I knew that I wanted to make 12 patties. It turned out that each one was roughly 4.4 ounces.

I shaped each portion into a tightly packed ball and flattened it on a piece of parchment.

One of the beauties of this recipe is that the formed patties can be frozen until ready to use.

Since it’s just the two of us, I kept two of the patties out and froze the rest.

I heated some vegetable oil over medium heat in a large skillet. When the oil was hot, I added the patties. I cooked the patties until they were golden brown on each side. This took about 7 minutes per side.

I served the Tasty Meatless Burgers on buns with lettuce, tomato and onion. I added some French fries on the side. The burgers were amazing! In fact, the Master Taste Tester was so impressed that he’s had them for four nights in a row!

Are these burgers vegan?

Are these burgers vegetarian?

As I understand it, there are different categories of vegetarians. If the vegetarian eats eggs, then this recipe would be vegetarian.

Can you use canned lentils in place of the dry lentils that have to be cooked?

You can use canned lentils in this recipe in place of dry lentils. However, you will need to drain and thoroughly rinse the lentils before placing them on paper towels to further dry out.

Can the Tasty Meatless Burgers be frozen?

These burgers freeze well. In fact, I regularly freeze the burgers and cook the burgers without thawing them.

Can portobella or white mushrooms be substituted for the cremini mushrooms?

For another delicious meatless burger, try my Portobella Mushroom Burgers. 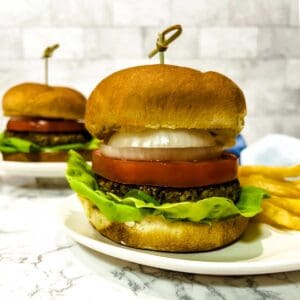