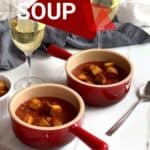 Gazpacho soup is super easy to make with fresh summer veggies, tomato juice, vinegar, and olive oil. Serve chilled with garlic croutons for a light and delicious meal. This cold and tangy soup is a refreshing way to beat the summer heat.

Gazpacho a Spanish soup generally hailing from Andalusia. The word gazpacho is derived from the Arabic for “soaked bread.” This refers to the general technique of adding bread or bread crumbs to thicken the soup.

While some Spanish cookbooks refer to gazpacho as a salad, it’s more frequent form in the US is an uncooked mixture of tomatoes, cucumbers, onions, peppers, garlic, olive oil, sherry vinegar and water, sometimes thickened with bread.

The best gazpacho is super refreshing and bursting with fresh-from-the-garden summer vegetables.

For a deviation from the traditional gazpacho, I decided to forego the addition of bread to thicken the soup but add garlic croutons on the top.

I made the garlic croutons from three simple ingredients: Cubed bread, garlic, and olive oil.

I spread the coated bread cubes on a baking sheet that I had lined with non-stick aluminum foil. Then I baked the croutons in a preheated 325°F oven for about 20 minutes, until they were nice and crispy.

I let the croutons cool and stored them in a Ziploc bag.

The main ingredients in gazpacho are the vegetables – garden fresh tomatoes, cucumbers, Vidalia onions, red bell peppers, fresh garlic, and fresh parsley. I prefer the English cucumber to the normal variety because it has less seeds and is tastier.

The most labor-intensive part of making the gazpacho was preparing the vegetables.

First, I peeled half of the cucumber and left the other half unpeeled. Then, I removed the seeds from the tomatoes, cucumber, and bell pepper.

Now for the easy part! I added the 1-inch pieces of the tomatoes, cucumber, bell pepper, and onion along with the minced garlic to my food processor fitted with the steel blade. I pulsed the vegetables about 5 times. I didn’t want to purée the vegetables but wanted them smaller than the ¼-inch vegetables.

After that, I added the ¼-inch vegetables, tomato juice, parsley, vinegar, olive oil, salt, and pepper to the food processor.

I pulsed the mixture 2 or 3 times to blend the ingredients together without breaking down the vegetables too much.

I transferred the gazpacho soup to a large bowl. I covered the bowl and refrigerated the soup for at least 4 hours. I wanted to ensure that the soup was thoroughly chilled and that the flavors had blended together.

The gazpacho soup was cold, full of healthy garden-fresh vegetables and refreshing on the hot summer day.

I served the gazpacho with garlic croutons, my Tomato, Vidalia Onion and Cucumber Summer Salad, a freshly baked loaf of crusty French bread and a chilled Chardonnay. Yum!

Should the cucumber be peeled?

Why is gazpacho generally served cold?

Gazpacho originated with the use of fresh summer vegetables and is traditionally served cold to counter the summer heat.

Gazpacho is a low-calorie nutritious soup that is rich in vitamins and fiber. It satisfies hunger, is rich in fiber and boasts many health benefits.

Should the tomatoes be peeled?

How long will gazpacho last?

Gazpacho will last 4 to 5 days in the refrigerator. In fact, the flavors tend to improve over time.

While gazpacho is typically served cold, other soups are equally good served hot or cold. Some of my favorites include the following recipes:

I hope you liked this recipe for Gazpacho Soup as much as I do. If so, please consider rating it and leaving a comment. Also, if you’d like to receive notifications of new posts by email, enter your email address in the Subscribe box. 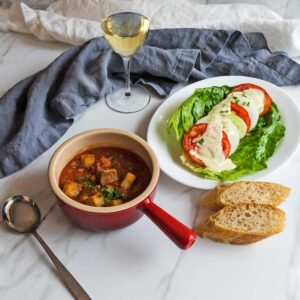