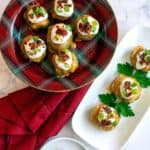 The ingredients for these little delicacies are pretty minimal.

As a starting point, I prepared the potatoes.

Now that the potatoes were washed and sliced, it was tome to make the Loaded Hasselback Potato Bites.

I noticed that when I removed the potatoes, some of the potato slices were open more than I would have liked. No problem. I pressed both ends of the potato together, allowing the melted cheese to serve as a type of “glue” to hold the slices together!

I served the Loaded Hasselback Potato Bites warm. They make an amazing appetizer or side dish sure to please even your most picky eater. Yum!

What can be substituted for creamer potatoes?

You can substitute small (1 ½ to 2-inches) Yukon Gold or red potatoes for the creamer potatoes.

What can be substituted for the Gouda cheese?

If you would prefer, you could easily substitute Cheddar cheese, Colby cheese, or Colby Jack cheese for the Gouda cheese.

Why is a wooden spoon used to slice the potatoes?

I’ve found that the bowl of a standard wooden spoon has the perfect amount of rise on both sides to prevent the slices to go all the way through the potato. You could also use chop sticks on either side of the potato for the slicing.

For other amazing loaded potato recipes, check out the following:

I hope you liked this recipe for Loaded Hasselback Potato Bites as much as I do. If so, please consider rating it and leaving a comment. Also, if you’d like to receive notifications of new posts by email, enter your email address in the Subscribe box. 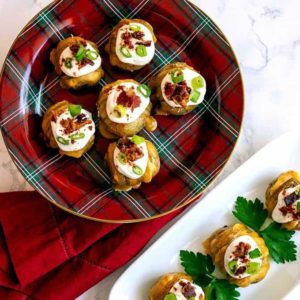 I first published the post on these amazing Loaded Hasselback Potato Bites on December 5, 2018. Since then, I’ve made these little delicacies many times.

This repost has updated photos and text, but the same great recipe.