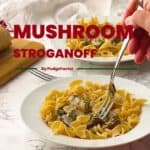 Mushroom Stroganoff is a quick and easy meal for meatless Mondays. It’s not quite vegetarian since I used chicken broth. However, I could have used vegetable broth instead for a delicious and savory vegetarian meal! I use leftovers for an amazing mushroom sauce.

For some reason I used to think that Stroganoff was German or Hungarian! However, its origins are actually Russian, with the dish named after one of the members of the influential mid-19th century Stroganoff family.

Typically, Stroganoff is made with strips of beef cooked with mushrooms and onions in a sour cream-based sauce.

After the collapse of the Tsarist regime, the popularity of Beef Stroganoff spread to China. Both Russian and Chinese immigrants, as well as US servicemen stationed in pre-Communist China brought the dish to the United States.

Throughout the world, Stroganoff remains a very popular dish with numerous variations. For example, chicken can replace beef as in my Chicken Stroganoff recipe. The dish is delicious with no meat at all as in this awesome Mushroom Stroganoff!

Stroganoff is most often served over egg noodles or rice. It can also be served over different pastas.

However it’s served, Stroganoff is a popular and easy to prepare dish.

Why You’ll Love This Recipe

Ingredients That I Used In This Recipe

I experimented a lot before arriving at what I think is the perfect Mushroom Stroganoff.

Here’s How I Made The Mushroom Stroganoff

Over time, I’ve found that the sour cream is much easier to incorporate into the dish when it has been mixed with a liquid. Also, it is less likely to curdle when added to hot liquid.

Here’s How I Finished Mushroom Stroganoff

At this point, I removed the skillet from the heat and added the freshly grated Parmesan cheese. I stirred the Mushroom Stroganoff until the cheese was melted.

I tasted the dish to see if it needed additional salt. It was perfect as is! After garnishing the Mushroom Stroganoff with minced fresh parsley, I served it over egg noodles.

To say that the Mushroom Stroganoff was delicious is a definite understatement. I thought that it was amazing! The meaty mushrooms were perfectly complimented by the sauce. Yum!

Does this recipe produce good leftovers?

The leftover Mushroom Stroganoff is delicious. I like to use the leftovers for an awesome sauce for such things as my Turkey Burgers and Salisbury Steak.

Can white button mushrooms be substituted for the Cremini mushrooms?

Is there a substitute for the sour cream?

You can easily substitute Greek Yogurt for the sour cream.

Is stroganoff the same as goulash?

If you’re a fan of stroganoff, check out my delicious Slow Cooker Chicken Stroganoff.

If you liked the recipe for Mushroom Stroganoff, please consider rating it and leaving a comment. Also, if you’d like to receive notifications of new posts by email, enter your email address in the Subscribe box. 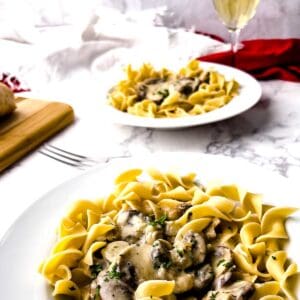