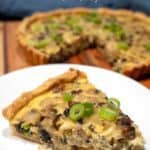 Similar to a Quiche, this Onion and Mushroom Tart in Puff Pastry delivers incredible onion flavor that is accented with savory sautéed mushrooms finished with a splash of Madeira. It’s perfect for a brunch or light dinner. Leftovers, if any, are just as good the next day reheated. 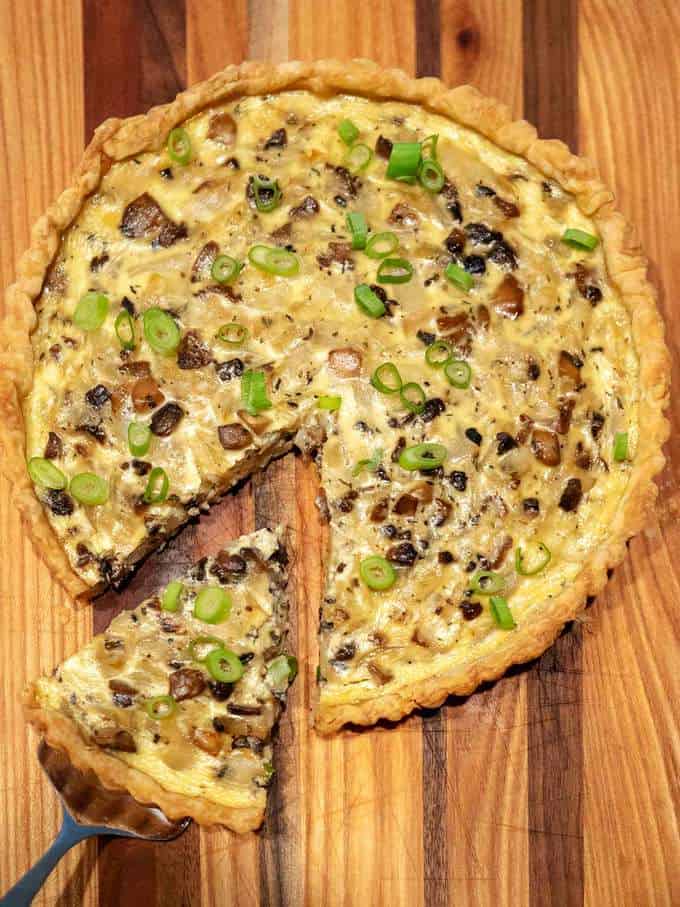 It has quickly become an absolute favorite of the Master Taste Tester – so much so that it’s not unusual that we have it at least once a week. I first blogged about this delicious tart on March 19, 2017. Since then, I’ve learned some things along the way, so decided that was time to update not only the photographs, but also some aspects of the actual recipe.

Ingredients for Onion and Mushroom Tart in Puff Pastry: 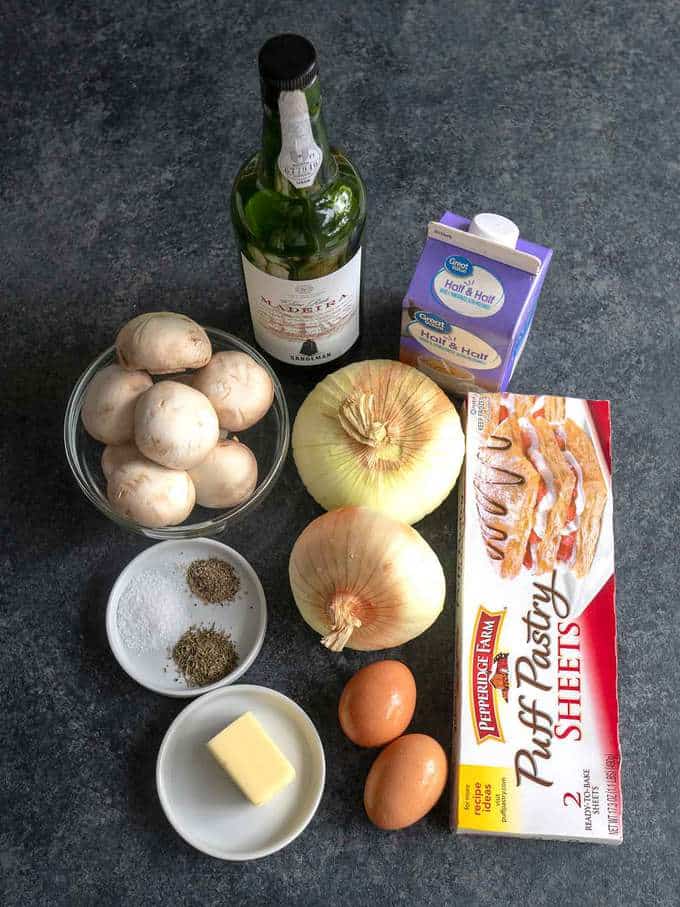 Forming the Puff Pastry for the Onion and Mushroom Tart.

After letting the puff pastry sheet thaw completely, I rolled it out on a floured surface to about an 11 or 12-inch square. Then, I transferred it to my 9-inch tart pan with a removable bottom. I cut away the excess puff pastry, leaving about ½-inch, that I tucked down around the sides of the tart pan. 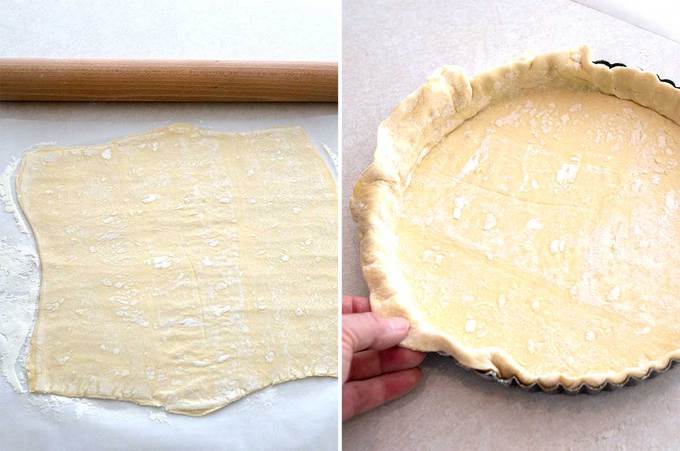 Once the crust was formed, I put it into the freezer for about 30 minutes. Over the years, I’ve learned that freezing the crust before baking it is one of the keys to preventing it from shrinking during cooking. After 30 minutes, I pricked the bottom of the crust with a fork to prevent it from puffing up during cooking. I also lined the crust with a crumpled piece of parchment paper, and filled the parchment paper with dried beans. You could also use pie weights here. The reason that I crumple the parchment paper is that it fits much more easily into the crust. The other thing that I’ve learned in terms of preventing shrinkage of the pastry during baking is to fill the pan with weights. 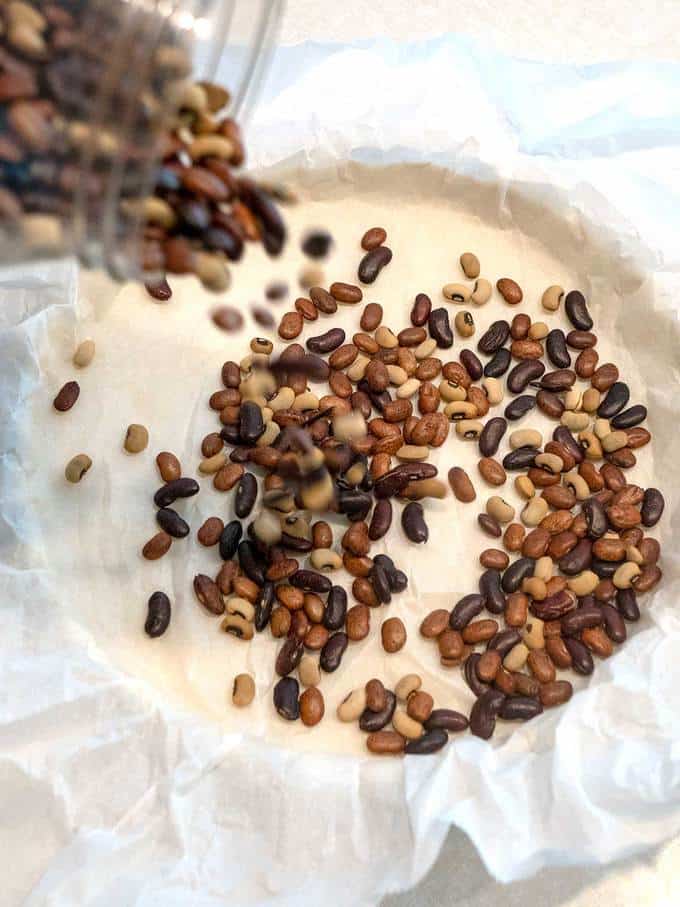 I popped the puff pastry crust into a preheated 400° F oven for about 25 minutes until the sides started to brown. I removed it from the oven, and carefully removed the parchment paper with the beans. Then, I returned the crust to the oven for another 5 minutes to brown the sides and bottom that had been covered in the parchment paper. 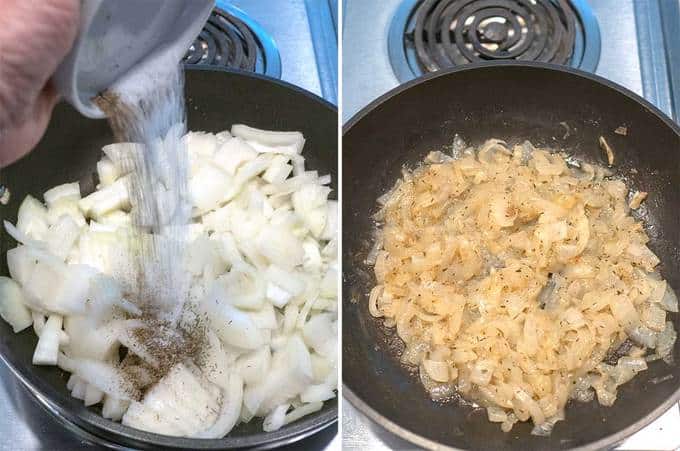 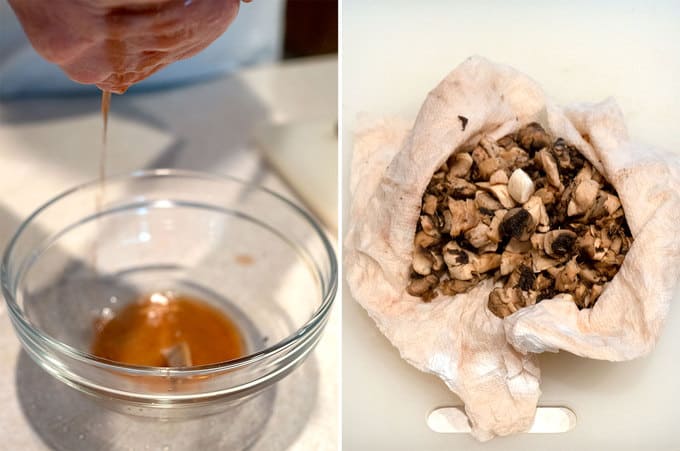 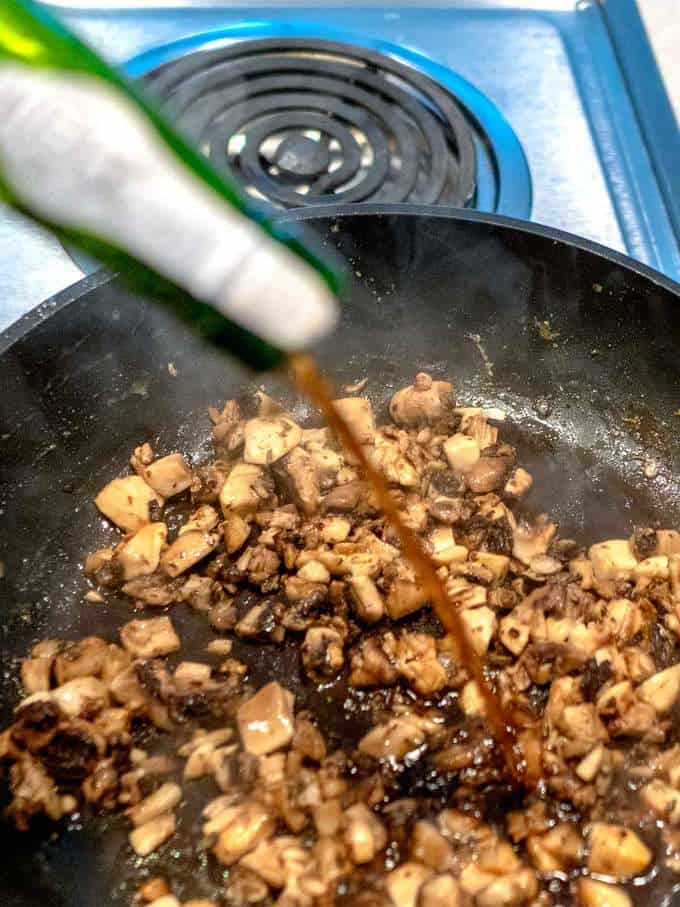 Finishing the Onion and Mushroom Tart in Puff Pastry:

I whisked the eggs and half-and-half together, and stirred in the onions and mushrooms. I poured the onion/mushroom mixture into the tart shell and placed it into a preheated 375°F oven for 25 minutes until the center felt firm to the touch. 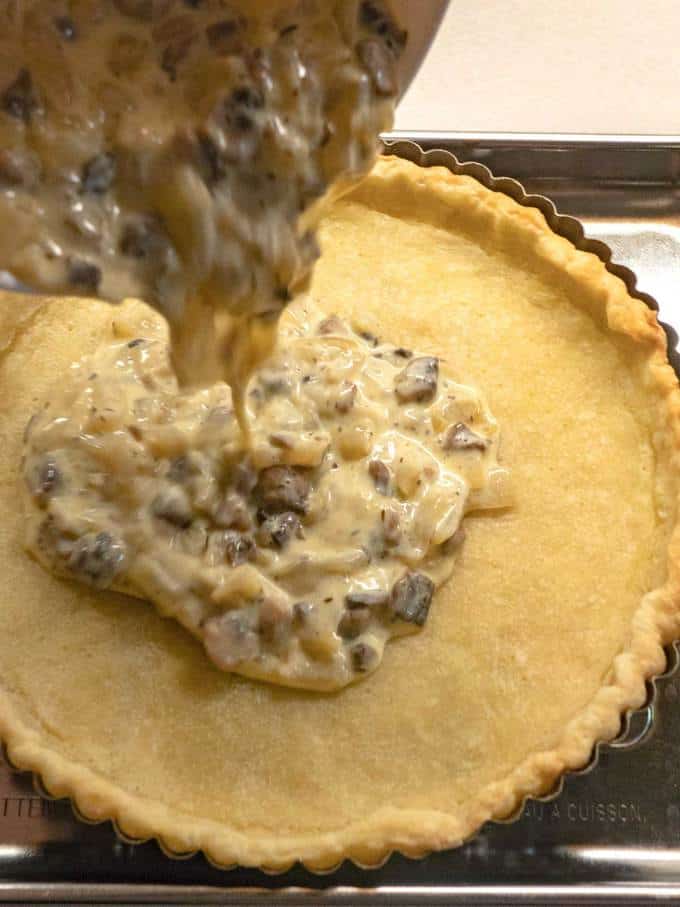 After 25 minutes, the Onion and Mushroom Tart was perfectly cooked. I removed it from the oven, and let it cool for about 10 minutes before transferring it to a cutting board. 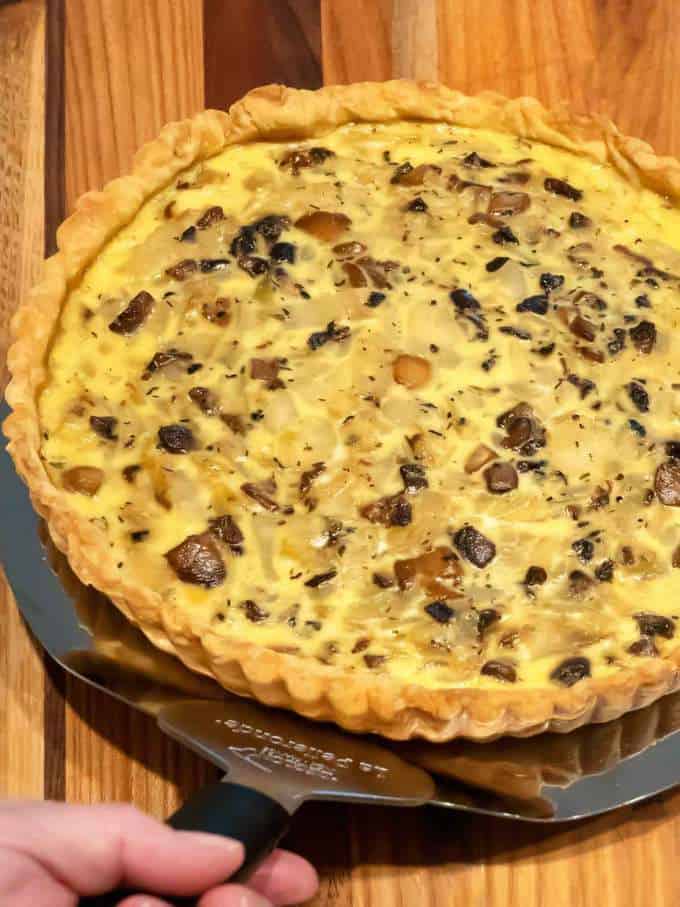 With its incredible onion flavor accented with an savory sautéed mushroom, the Onion and Mushroom Tart in Puff Pastry was absolutely delicious. Yum! 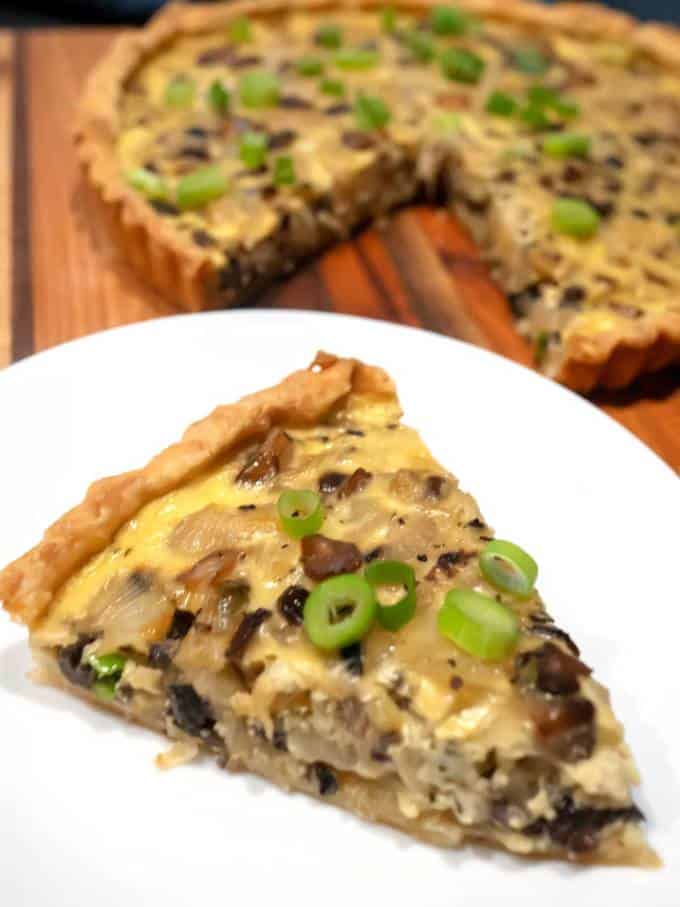 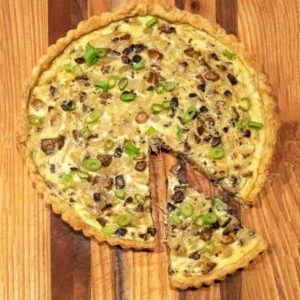