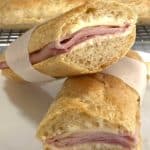 Jambon et Fromage is Susan’s and my favorite breakfast when we’re in Paris. In the morning, either Susan or I would venture out to the local boulangerie for the Jambon et Fromage which literally means ham and cheese. They are always made with a slathering of butter on a freshly baked baguette and topped with tasty ham and Swiss cheese. 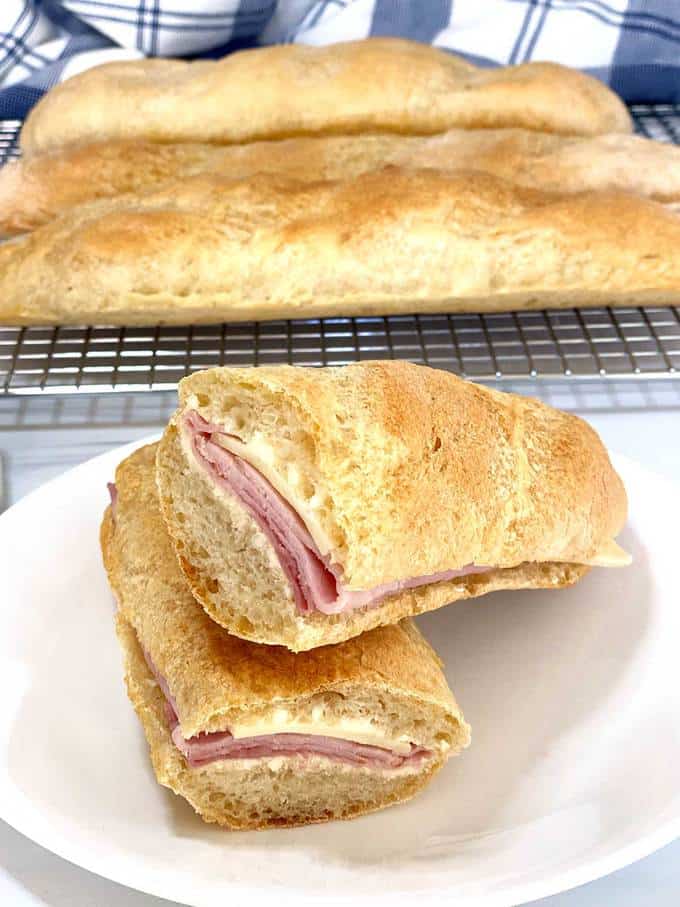 With COVID-19, any thoughts of Paris have been pushed to the background. However, that doesn’t mean that we can’t enjoy an amazing Jambon et Fromage back home!

The first order of the day was making the crusty baguettes. I’ve been making these baguettes with the bread machine doing most of the work for years. They never cease to amaze in terms of simplicity and taste.

These awesome baguettes use only five ingredients. 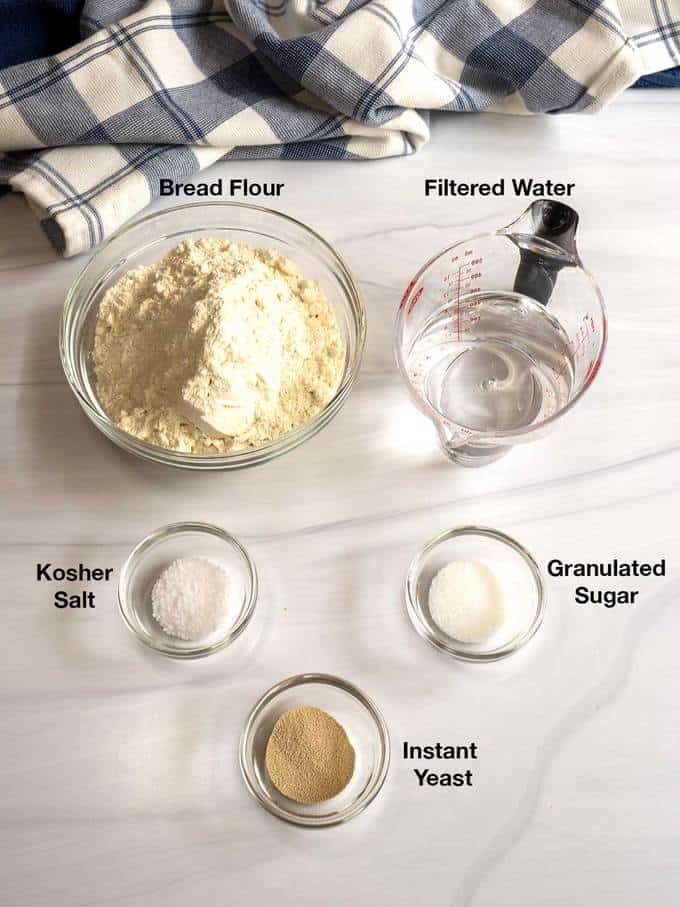 I knew that I wanted to make four baguettes for the Jambon et Fromage, so I weighed the dough – 25.12 ounces. I divided by 4 and portioned the dough into four pieces that weighted 6.26 ounces each (Photo 1). Yes, I”m a foodie nerd. I weigh everything!

I took one of the pieces of dough and flattened into an rectangle that was approximately 8-inches (Photo 2). Then I brought together the long sides and pinched them together. (Photo 3). Finally, I rolled the dough log until it was approximately 12 inches long (Photo 4). 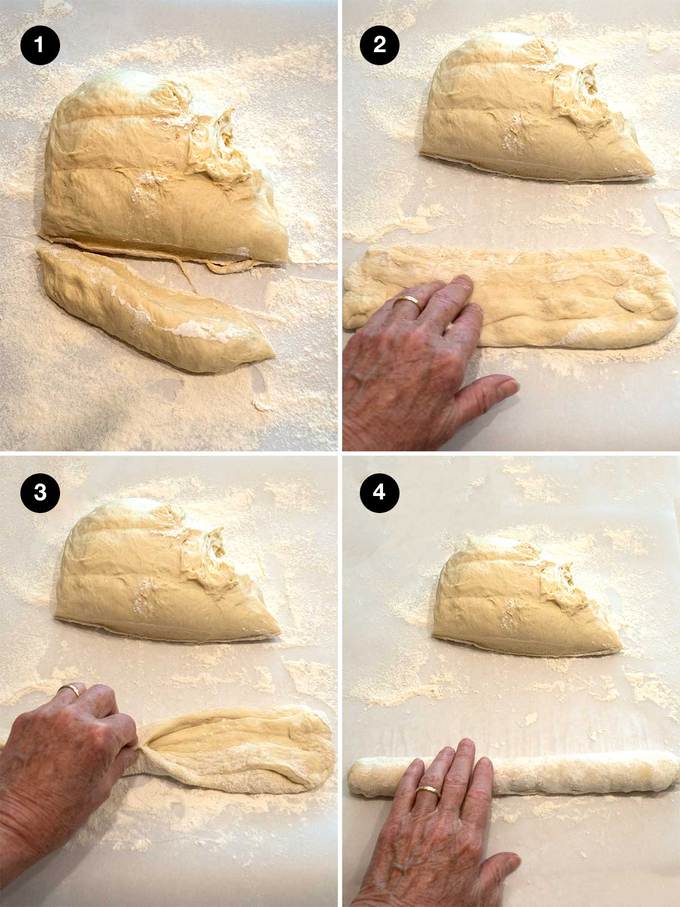 I placed the baguette dough into my baguette baking tray. I repeated this with the remaining dough. My baguette pan only had three slots, so I used another pan for the fourth piece of dough.

I’ve never had much luck at slashing the dough right before it goes into the oven. Rather I consistently slash the dough once it is formed and in the pan. This works at least for me!

Whenever I make bread, I always use Julia Child’s advice and turn on my electric oven for exactly 1 minute and 45 seconds. After that time, the heat in the oven produces the perfect environment for allowing the dough to rise.

After about an hour and 15 minutes. the dough had risen beautifully and was ready for the oven. 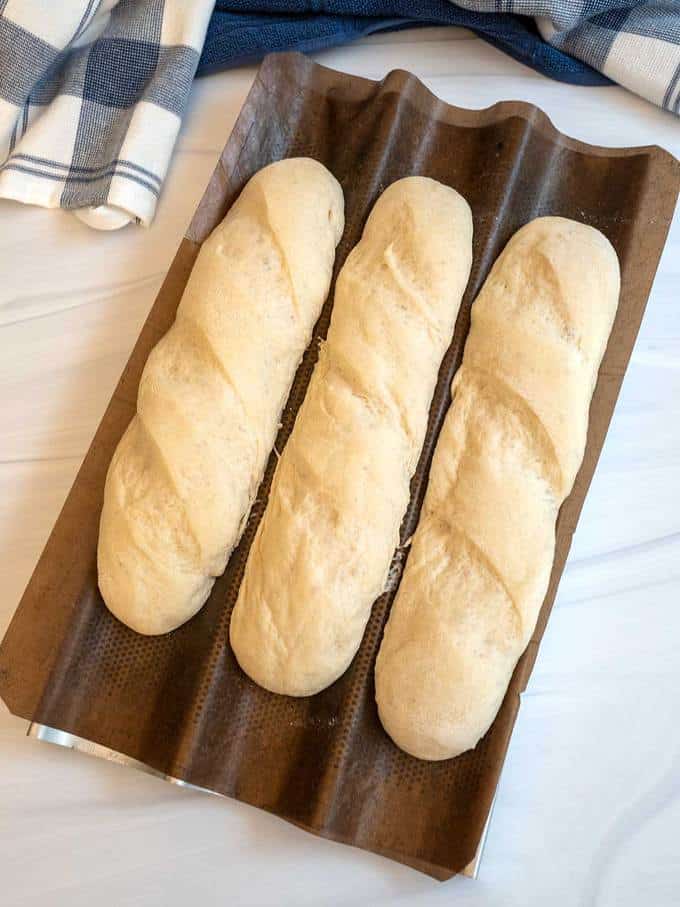 I baked the baguettes in a preheated 400°F oven for 20 minutes. After 20 minutes, they were perfectly cooked.

I let the baguettes cool completely on a wire rack. 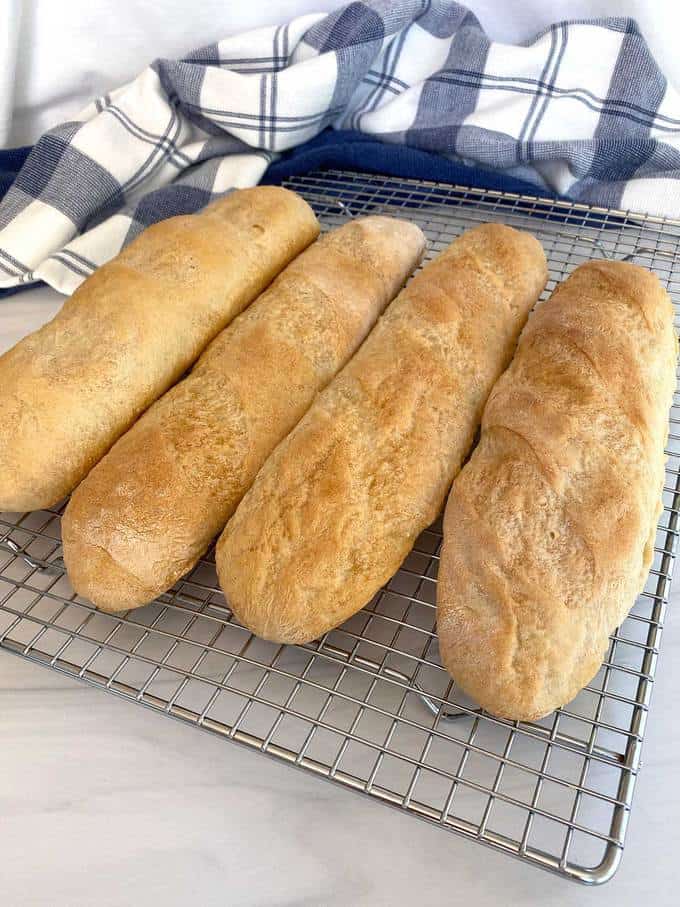 Once the baguettes were cooled, it was time to make the amazing Jambon et Fromage. Such simple ingredients – freshly baked baguettes, butter, sliced ham and Swiss cheese! 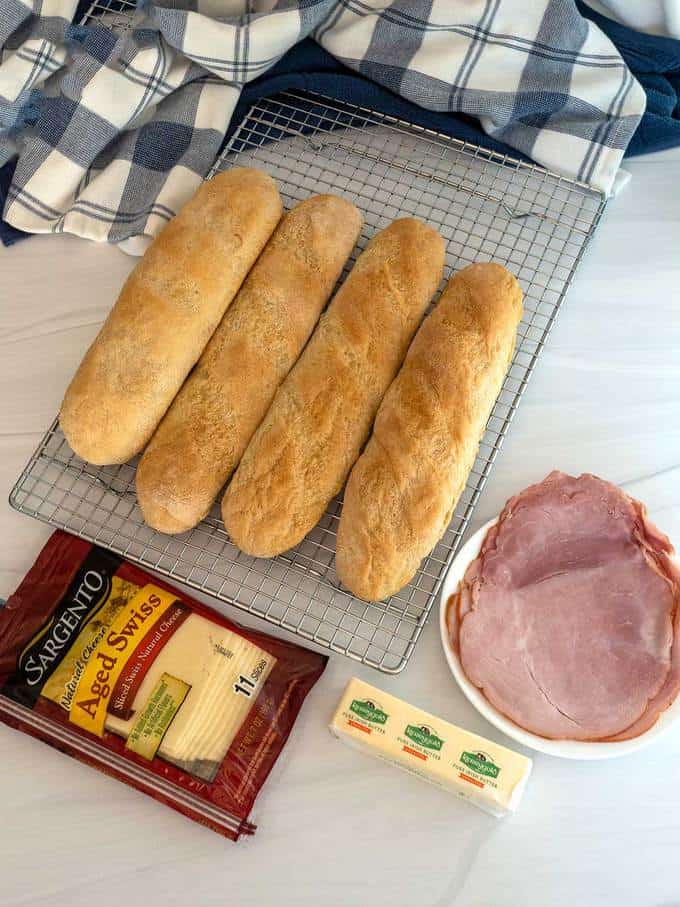 To start, I sliced a baguette length-wise, making sure that I didn’t cut it all the way through and spread each side with room temperature butter (Photo 5). Then, I placed ham on one side of the baguette (Photo 6). I topped the ham with Swiss cheese (Photo 7). That was it – a Jambon et Fromage (Photo 8) 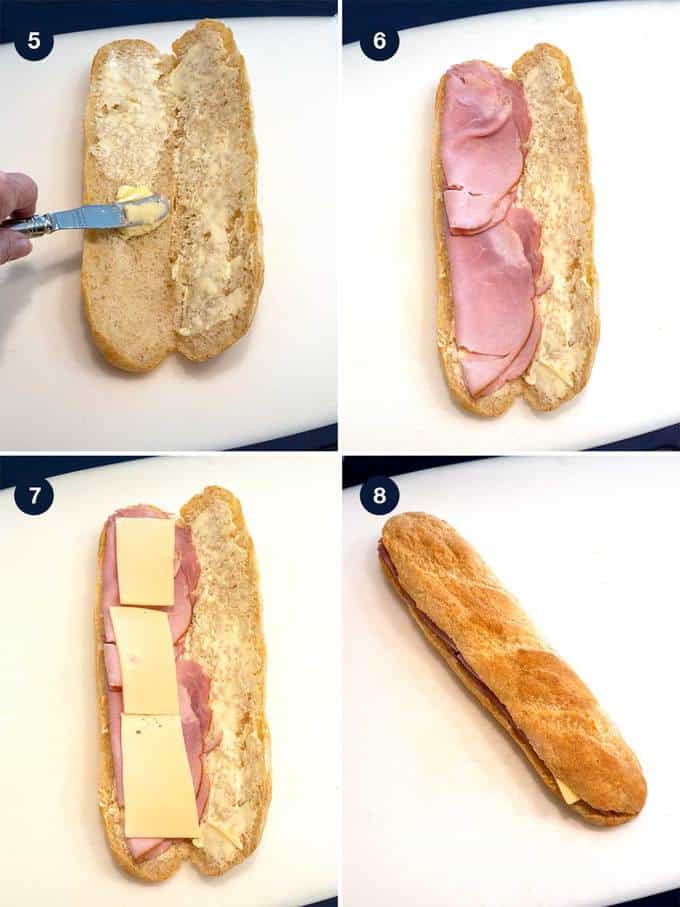 I’d like to say that we were partaking these amazing sandwiches while in Paris. However, things as they are mean that we have to settle for the “real thing” back home. They do, however conjure up fond memories of being in Paris. Yum! 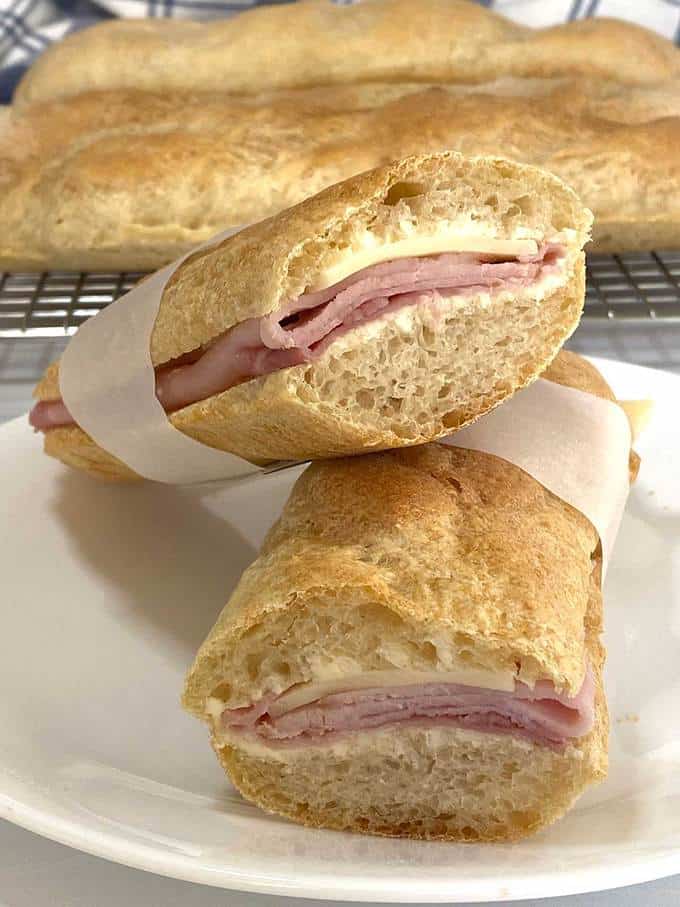 If you’d like to try some more tasty sandwiches served everywhere in Paris, try my Perfect Croque Monsieur or Croque Madame. Or if you’re in the mood for some sweet treats how about my French Macarons or Lemon Madeleines.

I hope you liked this recipe for Sandwich Jambon et Fromage as much as I do. If so, please consider rating it and leaving a comment. Also, if you’d like to receive notifications of new posts by email, ever your email address in the Subscribe box. 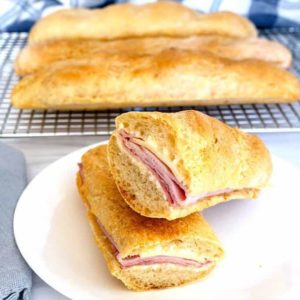 Jambon et Fromage is Susan's and my favorite breakfast when we're in Paris. In the morning, either Susan or I would venture out to the local boulangerie for the Jambon et Fromage which literally means ham and cheese. They are always made with a slathering of butter on a freshly baked baguette and topped with tasty ham and Swiss cheese.
5 from 3 votes
Print Pin Rate
Course: Bread, Brunch
Cuisine: French
Prep Time: 20 minutes
Cook Time: 20 minutes
Making Dough for and Rising Time for Baguettes: 3 hours
Total Time: 40 minutes
Servings: 4 Jambon et Fromage
Calories: 760kcal
Author: Chula King