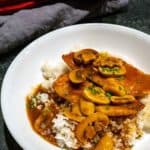 You could use dry Marsala in place of Madeira, and a slurry made with corn starch if you don’t have Bisto.

First, I cleaned the mushrooms and thinly sliced them.

Next, I thinly sliced boneless and skinless chicken breasts. Depending on the size of the chicken breast, I generally get 2 to 3 slices of chicken. To me, this is so much easier than pounding the chicken!

Then, I added the flour, salt, and pepper to a Ziploc bag. I gave the bag a shake to make sure that everything was well combined.

After that, I added part of the chicken. I gave the Ziploc bag a good shake to coat the chicken.

For the sauce, I added the chicken broth and Bisto to a 4-cup measuring cup, and whisked it to combine the ingredients. Then, I added the sour cream, and again whisked to ensure that everything was well combined.

I’ve learned that it’s best to combine the sour cream with a cold liquid as opposed to adding it to a hot liquid. The reason is that, at least for me, every time I add sour cream to a hot liquid, it tends to curdle.

Making the Chicken Scallopini with Mushrooms

With the ingredients prepped, I heated some vegetable oil in a 12-inch skillet over medium heat. When the oil was hot, I added several pieces of chicken and cooked the chicken for 2 to 3 minutes per side, until it was lightly browned.

I removed the cooked chicken from the skillet and place it on paper towels to drain. Then, I repeated the process with the remaining chicken.

When all of the chicken had been cooked, I increased the heat to medium-high and added the mushrooms to the skillet.

I remember hearing Julia Child saying that you shouldn’t crowd mushrooms. As you can see, I’m crowding the mushrooms! I’ve found, however, that if you cook them over high heat, stirring constantly, they cook just fine, with high heat evaporating any liquid given off by the mushrooms.

After several minutes, the mushrooms were nicely browned.

Then, I added the Madeira, and continued cooking the mushrooms over high heat until most of the Madeira liquid has evaporated. This in and of itself produces incredibly tasty mushrooms!

Once most of the Madeira had cooked down, I reduced the heat to medium and added the chicken broth/Bisto mixture.

I cooked this stirring constantly until it was bubbly and thickened. This took several minutes.

Once the sauce was bubbly, I returned the cooked chicken to the skillet. I continued cooking the Chicken Scallopini with Mushrooms for several minutes to ensure that the chicken was heated through.

Before serving the Chicken Scallopini with Mushrooms, I garnished it with some snipped fresh chives.

I served the Chicken Scallopini with Mushrooms with spaghetti and green peas on the side. I added a freshly baked loaf of crusty French bread and glass of chilled Chardonnay.

What is Bisto and why is it used?

Bisto is a British meat-flavoured gravy powder, which when added to liquid results in a rich tasting gravy. It was named “Bisto” because it “Browns, Seasons and Thickens in One”. There are now different varieties of Bisto available. It’s best to use the “Original” Bisto. If you cannot find Bisto, use cornstarch instead.

Can you omit the Madeira?

If you prefer, you can omit the Madeira. The sauce won’t be quite as rich tasting, but will still be good.

Scaloppine is a type of Italian dish that generally consists of thinly sliced meat, most often beef, veal, or chicken, that is dredged in flour and sautéed in one of a variety of reduction sauces.

What is the difference between Scallopini and Piccata?

Both dishes use thinly sliced meat. However, “Piccata” is usually associated with the type of sauce with a pronounced lemon flavor that poured over the chicken.

Can you pound the chicken breasts rather than slicing them thin?

I’m definitely a fan of chicken dishes. If you are as well, you should check out these amazing recipes:

I first blogged about this amazing recipe on September 22, 2018. It’s actually one of my favorite dishes.

This repost has new photographs and updated text. I also added a Web Story showing how I make this awesome dish.

Watch My Web Story Showing How to Make This Dish

I hope you liked this recipe for Chicken Scallopini with Mushrooms as much as I do. If so, please consider rating it and leaving a comment. Also, if you’d like to receive notifications of new posts by email, enter your email address in the Subscribe box. 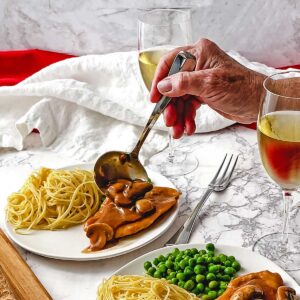