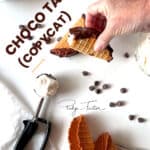 Choco Tacos will take Taco Tuesday to new heights with these perfect treats for hot summer days. However, Klondike has announced that it is discontinuing the beloved Choco Taco. Never fear – I’ve created a copycat version that is both easy to make and delicious to eat. Read on!

Choco Tacos are an ice cream treat resembling a taco. They consist of a disk of a waffle cone material folded to resemble a hard taco shell that is filled with ice cream and then coated in a chocolate magic shell. Are you drooling yet?

The Choco Taco was invented in 1983 and quickly became a favorite treat in the US and abroad.

Because of market forces, however, Klondike recently announced that it was discontinuing this popular treat. Fans everywhere were both shocked and dismayed.

However, fear not. With three easy steps, you can make your own Choco Tacos in the comfort of your home.

Here’s How To Make the “Waffle Taco Shells”

I made the “waffle taco shells” by modifying my popular Homemade Waffle Cone recipe.

I dropped one tablespoon of the batter onto the center of the hot waffle cone maker, closed the lid, and locked the latch.
After 1 minute and 10 seconds, I carefully remove the waffle disk from the waffle cone maker with a wooden fork. I formed the disk into a taco shell shape and placed it in the taco holder. I was careful not to burn myself when handling the waffle disk.
I repeated this with the remaining waffle cone batter and ended up with 12 4-inch “waffle taco shells”.

Here’s How To Make The No-Churn Vanilla Ice Cream

The ice cream that I make is a no-churn vanilla ice cream. It only involves three ingredients, takes several minutes to make, and can be piped into the “taco” shell.

I used a small butter knife to smooth out the ice cream. Then, I placed the filled “taco” shells in the freezer for about an hour for the ice cream to harden.

Here’s How To Make the Magic Shell

I let the magic shell mixture come to room temperature before dipping the ice cream-filled “tacos” in it.

I removed the ice cream-filled “tacos” from the freezer and dipped the tops in the magic shell mixture. I allowed the excess chocolate to drip off.

I ended up with 12 amazingly delicious copycat Choco Tacos. Each bite was pure perfection. Yum!

Are the “taco” shells brittle such that Choco Taco falls apart with the first bite?

When the “taco” shells are first made, they are brittle like a waffle cone. However, the ice cream softens the shells somewhat making it easy to eat the Choco Taco without it falling apart.

Can you use store-bought ice cream?

You can use store-bought ice cream if you like. However, it needs to be softened enough to allow for the filling of the “taco” shell but not softened so much as to make a mess.

What is the difference between unrefined and refined coconut oil?

Can you use a Ziploc bag to pipe the ice cream into the “taco” shell?

You can use a Ziploc bag in place of the pastry bag with the 1A tip for piping the ice cream. Just place the ice cream in the Ziploc bag and make a small cut in the corner of the bag.

Can a regular waffle maker be used to make the waffle “taco” shells?

Nothing beats the summer heat like a cold, refreshing ice cream treat. In addition to the Copycat Choco Taco recipe, you should try these delicious recipes.

I hope you liked this recipe for Copycat Choco Tacos as much as I do. If so, please consider rating it and leaving a comment. Also, if you’d like to receive notifications of new posts by email, enter your email address in the Subscribe box. 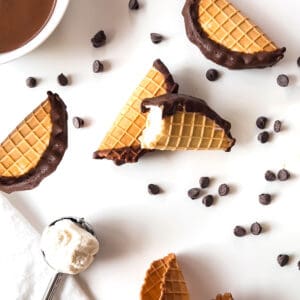