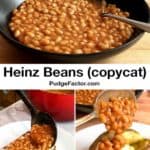 Heinz Beans, produced in England, are a staple for many Brits both in the UK and abroad. If you’ve ever been to the UK, you might have been surprised to see the beans included in a full English breakfast. Heinz beans are the ultimate in comfort food, no matter how they are served.

The UK version of Heinz beans is an absolute favorite of the Master Taste Tester. Through the years, I tried unsuccessfully to reproduce this humble product. However, RecipeTin Eats published a copycat recipe that looked so much like the real thing that I just had to give it a try. They were about as close to the real thing as I could have imagined.

Heinz is an American company founded in 1869 in Sharpsburg, Pennsylvania. In 1886, Heinz baked beans were exported to England and first sold in Fortnum & Masons.

Originally, the beans included pork and much more sugar than now. Over the years, the sugar level was decreased to suit the British taste. Because of meat shortages during World War II, pork was omitted.

If you’re interested, you should check out the Inside the Factory episode showing the amazing process whereby these delicious beans are produced.

Because the beans are dried, they need to be reconstituted. This is done by soaking the beans in water.

Two methods can be used to soak the beans: (1) long-soak in cold water; or (2) quick-soak in boiling water. I tried both methods and prefer the quick-soak method because it’s quicker and does as good a job as the long-soak method.

With the quick-soak method, I rinsed the dried beans and added about 6 cups of filtered water to them in a Dutch oven. I heated the water to boiling and let the beans boil for about 2 minutes. Then, I removed the pan from the stove, covered it, and let the beans soak for about an hour.

After the beans soaked for an hour, I drained and rinsed them. Now, it was time to cook the beans.

I returned the soaked beans to the Dutch oven and covered them with about 6 cups of filtered water. I brought the beans to a boil. Then, I reduced the heat to medium-low, covered the pan, and cooked the beans for about 45 minutes, just until the beans were tender, but still slightly firm on the inside. The actual time will vary depending on the beans.

After 45 minutes the beans were perfect. They were soft on the outside and slightly firm on the inside. I wanted to be careful not to overcook the beans at this point. The reason was that the beans still needed some cooking in the sauce.

Once the beans were cooked, I drained them and set them aside to make the sauce.

Beans are beans. However, it’s the sauce that defines Heinz beans.

Making the sauce is super simple. Basically, I whisked together all of the sauce ingredients in the same Dutch oven that I used to cook the beans. That’s it!

Once I had whisked together the sauce ingredients, I added the cooked beans to the Dutch oven. I stirred everything together and set the Dutch oven over medium heat.

After the mixture came to a slow boil, I reduced the heat to medium-low and cooked the beans uncovered for about 20 minutes, until the beans were perfectly done.

After 20 minutes, a poured in a slurry of cornstarch and water. I stirred the beans constantly until the sauce had thickened.

The transformation was amazing. Before my very eyes, the soupy, nondescript mixture turned into thick tomato-coated beans that looked just like the Heinz beans!

I let the beans cook for about five more minutes before removing them from the heat.

How I Serve Heinz Beans

Heinz beans are amazingly versatile. All that is required is to heat them up either in the microwave or on the stovetop.

When we want the ultimate in simplicity and comfort food, we have beans on toast. This may sound odd to Americans but is delicious.

Sometimes, we do as the British do and have a jacket potato (a.k.a. baked potato) loaded with Heinz beans. This may also sound odd to Americans. However, it’s delicious.

This recipe for Heinz Beans is about as close to the real thing as I can imagine. If you’re a fan of this British staple, you should give the recipe a try. Yum!

Is it really necessary to use filtered water in this recipe?

Can this recipe be made vegetarian?

For a vegetarian recipe, you can either omit the chicken broth and replace it with the same quantity of water or use vegetable broth.

What about the foam that forms on the top of the beans as they cook?

As the beans cook, they tend to produce foam on top of the water. You can spoon the foam off, or just leave it. Over time, the foam will disappear.

Leftovers can be stored covered in the refrigerator for up to a week. Reheat the beans in the microwave or on the stovetop.

If you’re a fan of British food like I am, you should try these amazing recipes:

This is a repost of the Copycat Heinz Beans from May 18, 2020. This repost includes the same great recipe with the cooking times tweaked a bit from the original post. It also includes updated text and photographs.

I first posted this amazing recipe on May 18, 2020. Since then, I’ve made this recipe number of times. This update contains improved text and photographs. It also includes the same great recipe, with the cooking times tweaked a bit.

I hope you liked this recipe for Copycat Heinz Beans as much as I do. If so, please consider rating it and leaving a comment. Also, if you’d like to receive notifications of new posts by email, enter your email address in the Subscribe box. 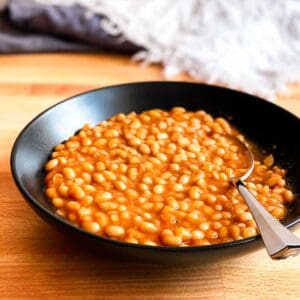 Heinz Beans, produced in the England, are a staple for many Brits both in the UK and abroad. They are the ultimate in comfort food, no matter how they are served. This recipe is about as close to the real thing as one can imagine.
5 from 11 votes
Print Pin Rate
Course: Side Dish
Cuisine: English
Prep Time: 20 minutes
Cook Time: 1 hour
Quick-Soak Time: 1 hour
Servings: 14 servings
Calories: 137kcal
Author: Chula King