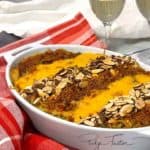 You might think that tetrazzini is an Italian dish. Although it’s named after the Italian opera star Luisa Tetrazzini, it’s actually an American dish.

Most often tetrazzini is made with chicken and mushrooms in a creamy cheese sauce flavored with dry sherry. Any type of pasta can be used, but often the pasta of choice is spaghetti. It’s not unusual to see tetrazzini topped with cheese, almonds, breadcrumbs, etc.

Since I had some leftover ham that needed to be used, I opted to replace the chicken with ham and to add some green peas.

The ingredients that I used for this amazing one-dish wonder were petty much typical of tetrazzini.

The Pasta: For the pasta, I used spaghetti. In addition, I mixed the spaghetti with the other ingredients to produce a casserole. I could have also used penne, rotini, egg noodles, etc.

The Meat: As the name indicates, I used ham in this dish. I could have also used chicken or turkey.

The Vegetables: In addition to the typical mushrooms, I used onions, green peas and pimentos. The green peas made the casserole a one-dish wonder.

The Sauce: The sauce was a basic béchamel sauce made with butter, flour and milk, with the addition of a can of cream of mushroom soup.

The Cheeses: I used both extra sharp Cheddar cheese and freshly grated Parmesan cheese in this dish.

The Flavorings: I used dry sherry in this dish along with salt, pepper, garlic powder and paprika.

The Toppings: For the toppings of the tetrazzini, I chose freshly grated Parmesan cheese mixed with paprika, cheddar cheese and toasted sliced almonds. I could have also used breadcrumbs here.

Making the Cheesy Ham Tetrazzini is relatively straight-forward. Let me show you how!

The Cheesy Ham Tetrazzini was amazing. All of the flavors perfectly complimented each other for a spectacular one-dish wonder. Yum!

Can I use chicken in place of the ham in this recipe?

What other pasta would work in this dish?

Can I omit the sherry?

The sherry is added for flavor. However, you can certainly omit the sherry. You could also use white wine in place of the sherry.

I don’t have any pimentos. Can I safely omit them?

The pimentos add both flavor and color to the dish. However, you can omit them without dramatically altering the taste of the final dish.

Can I omit the cream of mushroom soup?

Can I just top the casserole with cheese and/or breadcrumbs?

I like to use several different toppings on this casserole diagonally arranged. This, however, is more for appearance than anything else. You could certainly top the casserole with just cheese, cheese and breadcrumbs, etc. Use whatever you prefer.

Can I freeze this tetrazzini?

This tetrazzini freezes beautifully. Increase the cooking time by about 5 minutes if you bake it from the freezer.

This recipe makes a lot, so we always have leftovers which are just as good the next day. I like to heat the leftovers in the microwave for several minutes until heated through.

If you are a fan of one-dish wonders like this Cheesy Ham Tetrazzini, you should check out the following awesome recipes:

I hope you liked this recipe for Cheesy Ham Tetrazzini as much as I do. If so, please consider rating it and leaving a comment. Also, if you’d like to receive notifications of new posts by email, ever your email address in the Subscribe box. 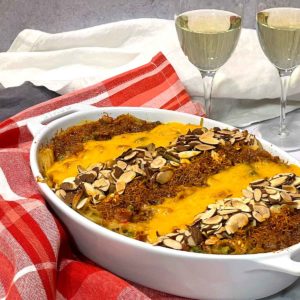 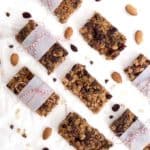 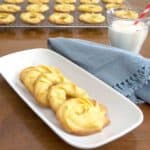