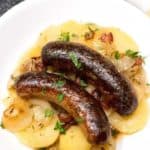 Dublin Coddle is a traditional Irish dish dating back to the 17th century. It consists of potatoes, onions, and sausage cooked together and garnished with bacon to create an amazing dish. It’s the perfect dish for your St. Patrick’s Day celebration. 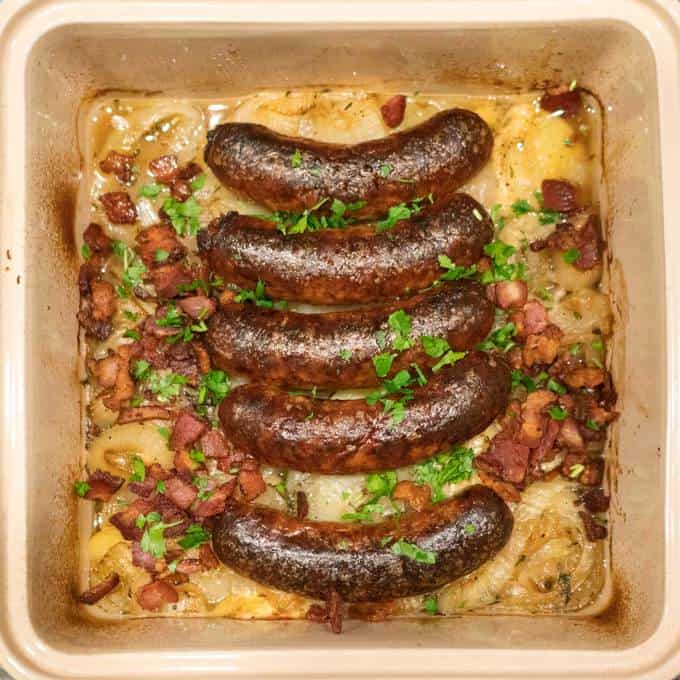 Dublin Coddle easy, albeit a bit time-consuming to make and can be put together ahead of time. Be sure to have some easy to make Irish Soda Bread on hand to mop up the yummy juices.

This traditional Irish comfort food dates back to the 17th century. It generally consists of sliced potatoes, onions, sausage and bacon. In Ireland, the sausage tended to be bangers. The term bangers was first attributed to sausages made during World War I. Because of meat shortages, sausages tended to have a high water content. Because of this, they tended to pop or bang when cooked over high heat. If you can’t find bangers, you can use Bratwurst!

Dublin Coddle was often put together on Thursdays to use up leftovers. The reason was that Catholics were not allowed to eat meat on Fridays.

It was often made with leftovers for the Thursday meal because Catholics were not allowed to eat meat on Fridays. Dublin Coddle was thought to be a favorite dish of the writers Jonathan Swift and Seán O’Casey. In addition, it’s mentioned in the works of James Joyce.

The traditional Dublin Coddle uses Irish bangers. However, bratwurst works well if you can’t find Irish bangers. Be sure to have some Irish Soda Bread on hand to mop up the juices! 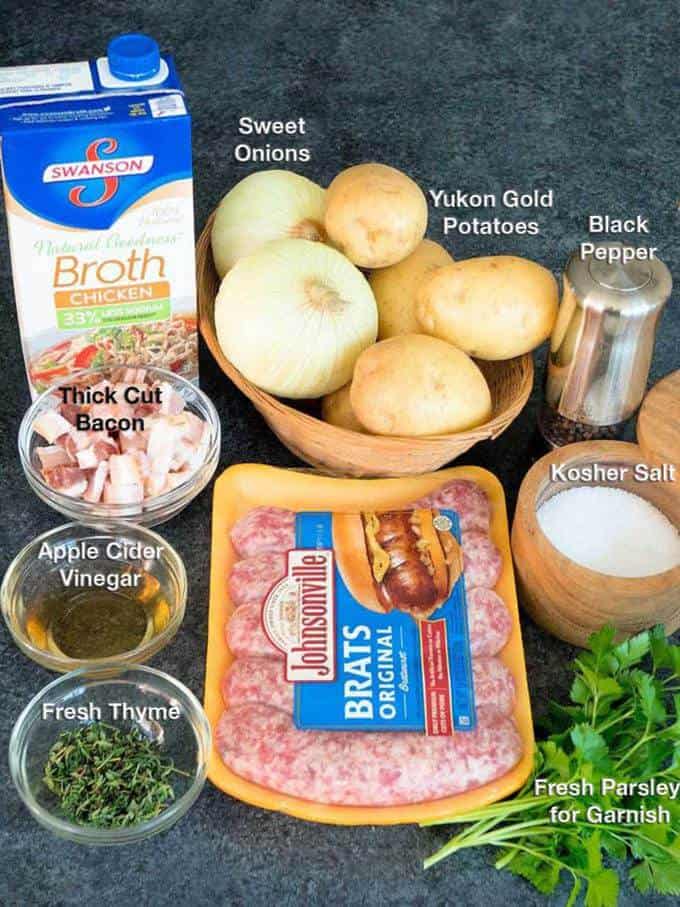 I started by layering the potatoes in the bottom of a 9 x 9-inch baking dish. Then, I sprinkled the potatoes with salt and pepper, and set them aside. 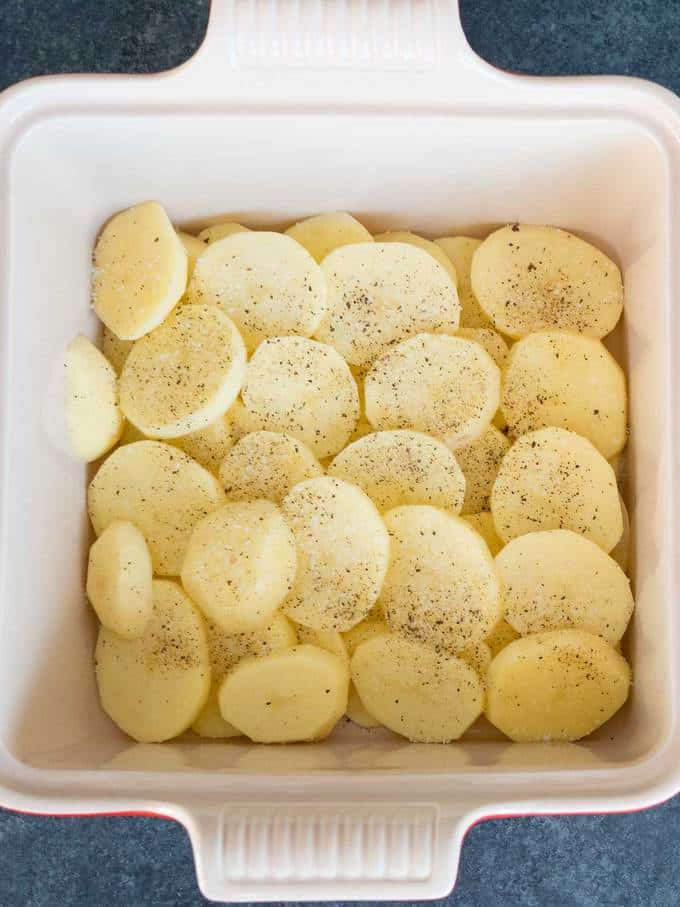 Next, I cooked the bacon in a 12-inch skillet until it had rendered its fat and was crispy. This took about 15 minutes. I transferred the bacon to a paper towel lined plate. 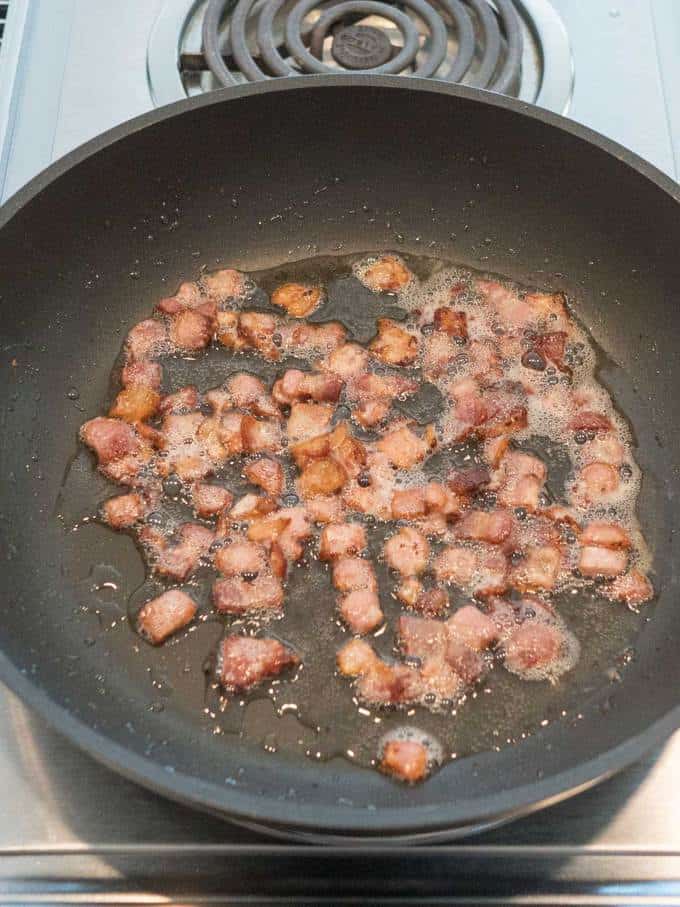 Then, I browned the sausages in the same pan that I had used for the bacon. This only took about 5 minutes. I transferred them to the paper towel lined plate to drain. At this point, the sausages were not cooked through. 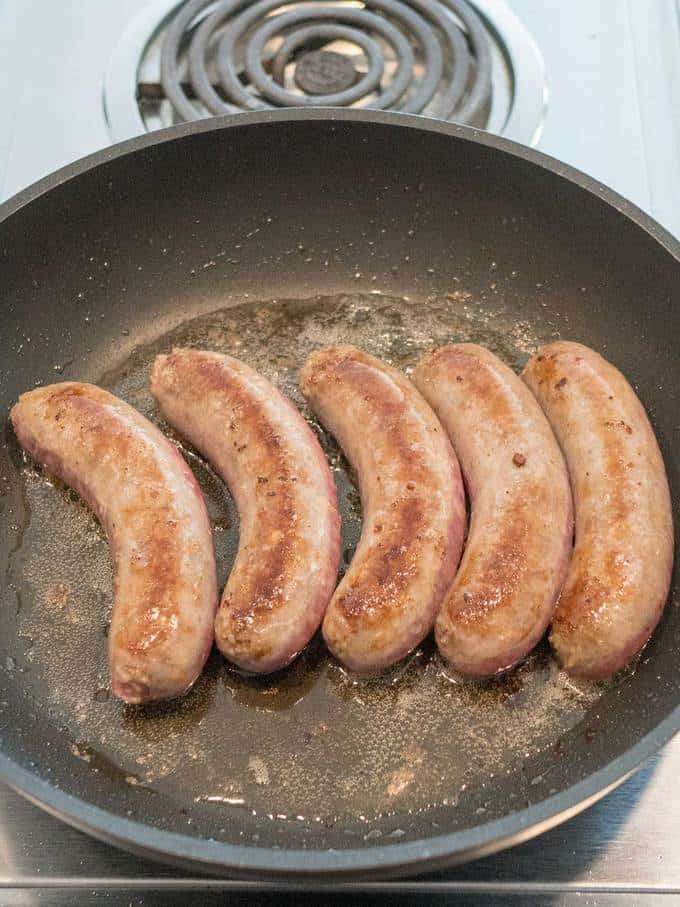 I poured off most of the fat in the pan, and added the onions, thyme, salt, and freshly ground black pepper.

I covered the pan, and cooked the onions over medium heat until they started to soften. This took about 9 minutes. Next, I added the chicken broth and vinegar to the onions, and stirred the mixture to scrape up any browned bits.

After the liquid was hot, I poured the mixture over the potatoes, and spread the onions in an even layer. 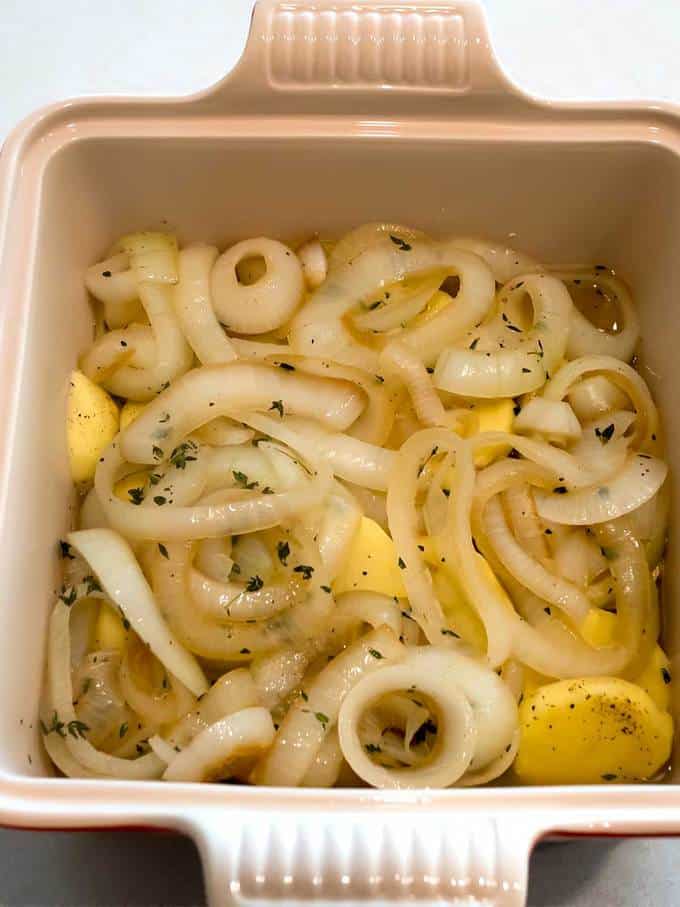 Finally, I finished the dish off by placing the sausages on top of the onion layer. 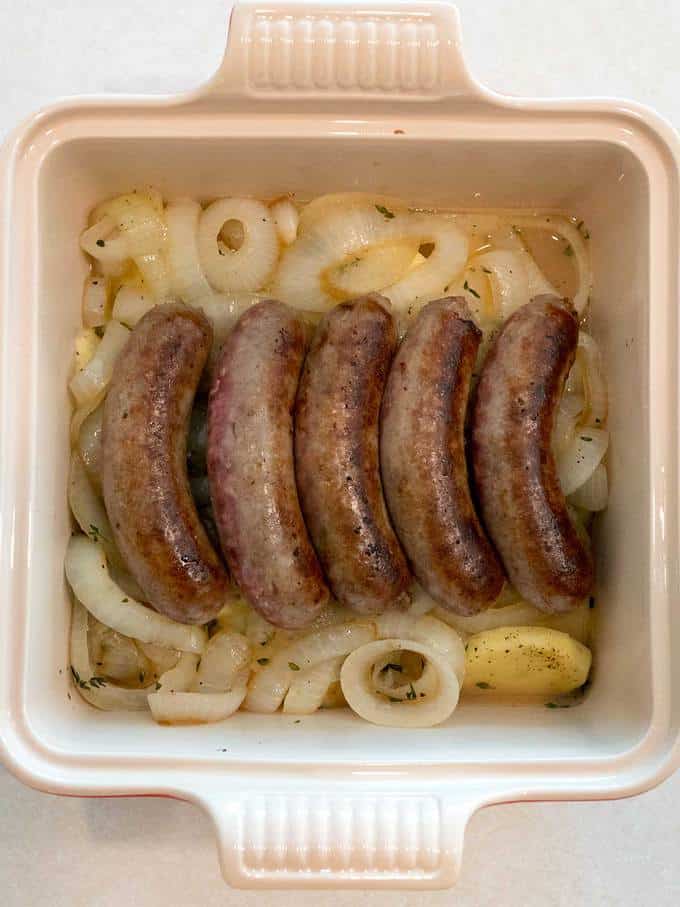 I served it with some Irish soda bread that I had made yesterday. Yum! 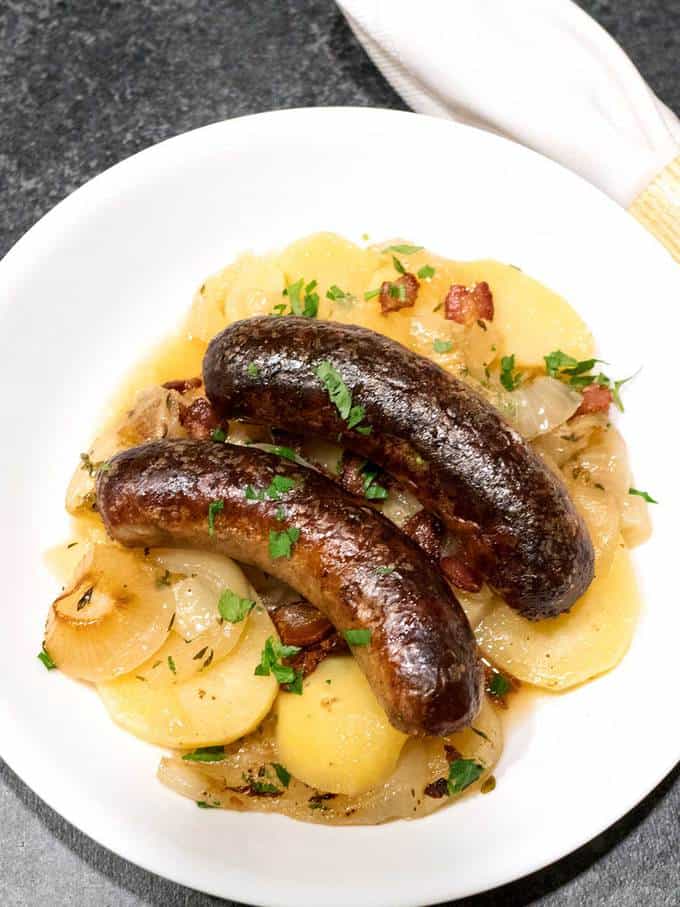 What better way to celebrate St. Patrick’s Day than with traditional Irish entree recipes. In addition to this awesome dish, you should try:

I hope you liked the recipe for the Dublin Coddle as much as I do. If so, please consider rating it and leaving a comment. Also, if you’d like to receive notifications of new posts by email, ever your email address in the Subscribe box. 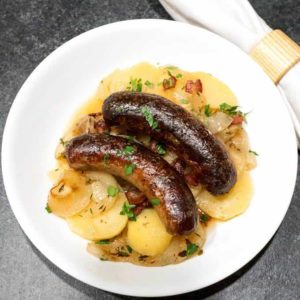 I first posted this amazing dish on February 27, 2017. This repost contains the same great recipe with updated photos and text.