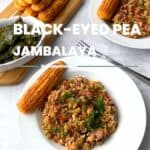 Black-eyed pea Jambalaya is perfect for New Year’s Day and upcoming Carnival season festivities that start on January 6. It’s easy to make and produces amazing leftovers. I like serving this delicious recipe with Southern Cornbread Sticks and collard greens for a traditional New Year’s fare or a Mardi Gras-inspired dinner.

Jambalaya is a one-pot dish that hails from Louisiana. It typically contains sausage, rice, and the holy trinity of onions, celery, bell pepper, and garlic. Generally, the bread of choice to serve with Jambalaya is cornbread.

Jambalaya can be either Creole with the addition of tomatoes or Cajun when made without tomatoes. Once the basic ingredients are added, the final dish can be varied by adding protein such as shrimp or crawfish, chicken, or for this recipe, black-eyed peas.

Once the sausage was cooked, I drained it well on paper towels. Then, I poured the fat from the Dutch oven.

I cooked the vegetables for about 10 minutes to soften them. While cooking, I scrapped up the browned bits from the bottom of the Dutch oven.

I let the rice cook for several minutes.

I let the Black-Eyed Pea Jambalaya sit for about 5 minutes. Then, I fluffed it with a fork.

I served the Black-Eyed Pea Jambalaya with freshly made Southen Cornbread Sticks and collard greens. This was a perfect meal for both New Year’s Day and Carnival season. Yum!

What’s the difference between Jambalaya and gumbo?

Both Jambalaya and gumba contain similar ingredients. However, Jambalaya includes rice that is cooked with other ingredients. Gumbo is often served over rice. Perhaps the main difference is that gumbo is roux-based, whereas Jambalaya does not use a roux.

What’s the difference between Jambalaya and étouffée?

Étouffée is like a thick gravy that is generally served over rice. Jambalaya, on the other hand, is a rice dish where the rice is cooked with other ingredients.

What is the proper consistency of Jambalaya?

The jambalaya is slightly wet but thick. It is neither soupy nor gooey.

Is Jambalaya Creole or Cajun?

Is there a good substitute for smoked sausage if it’s unavailable in the grocery store?

You can use a smoked sausage of your choice in this recipe or an andouille sausage. Just make sure to cook the sausage if it’s uncooked before adding it to the other ingredients.

The leftovers from this recipe are delicious. I will generally cover leftovers, refrigerate them for several days, and then warm them in the microwave.

Can a rice cooker be used for this recipe?

The amount of Black-Eyed Pea Jambalaya that this recipe produces is pretty large. Therefore, if the rice cooker is large, it would work well for this recipe.

I hope you liked this recipe for Black-Eyed Pea Jambalaya as much as I do. If so, please consider rating it and leaving a comment. Also, if you’d like to receive notifications of new posts by email, enter your email address in the Subscribe box. 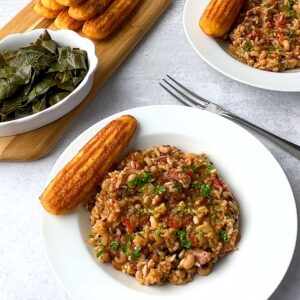