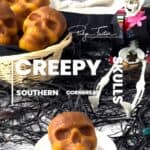 Creepy Southern Cornbread Skulls are the perfect complement to your Halloween festivities. Crispy on the outside and moist on the inside, these cornbread skulls are sure to WOW young and old.

Both southern and northern cornbread are made with cornmeal. Other than that, the two types of cornbread tend to be different concerning whether or not flour and sugar are added to the batter.

In addition, southern cornbread generally contains little or no sugar. This allows the corn taste to shine through. On the other hand, Northern cornbread tends to include a fair amount of sugar, resulting in a much sweeter cornbread.

The preference between southern and northern cornbread often boils down to personal taste.

In the south, there are numerous variations of basic cornbread. Hushpuppies are made with a cornbread batter but are fried rather than baked. Hoecakes are fried cornbread pancakes. Cornpone is often cooked in a cast iron skillet and contains little or no milk, eggs, or sugar.

I used a special pan to make the skull-shaped cornbread. While there are many options, I selected the Nordic Ware Skull Cakelet Halloween Bakeware Haunted Pan.

I initially got the pan to make Skull Pizza. However, after some experimentation with Susan, the Skull Pizza was so successful that I decided to branch out and make these delicious Creepy Southern Cornbread Skulls.

Steps in Making the Skull Cornbread

I happened to have a very large ice cream scoop that Susan had given me that was perfect for the job. As a guide, the cornbread batter came just to the top of the indentations around the skull mouth.

As it turned out 400° F was the perfect temperature, at least for my oven. I removed the cornbread skulls from the oven and let them sit in the pan for about five minutes.

I broke one of the cornbread skulls in half. The outside was crispy and the center was moist and of a perfect texture for Southern cornbread.

I ended up with 12 Creepy Southern Cornbread Skulls. I served them with a bowl of chili for a spooktacular Halloween meal. Yum!

Can milk be substituted for the buttermilk in this recipe?

It’s best to use buttermilk in this recipe because of its interaction with the baking soda. However, if you don’t have buttermilk, you can easily make it by adding 2 tablespoons of white vinegar to a measuring cup and adding enough milk to reach 1 ¾ cups.

Is it better to use stone-ground cornmeal in this recipe?

Can the cayenne pepper be omitted in this recipe?

You can omit the cayenne pepper in this recipe. You can also increase the amount if you’d prefer a spicier cornbread.

Can the skull cornbread be reheated?

It’s easy to reheat the skull cornbread. I usually reheat it in a 350°F oven for about 10 minutes.

How long will the skull cornbread keep?

If you’re planning a Halloween get together, you should try these other spooktacular Halloween recipes.

I hope you liked this recipe for Creepy Southern Cornbread Skulls as much as I do. If so, please consider rating it and leaving a comment. Also, if you’d like to receive notifications of new posts by email, enter your email address in the Subscribe box. 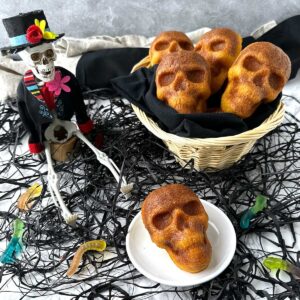