If you’ve dreamed of making homemade bread with a thick crispy crust and big fat holes like the finest artisan bread, but have been afraid to make the plunge, think again! No-Knead Bread is probably the easiest homemade bread you can imagine. It doesn’t require any special equipment like a stand mixer or bread machine…

END_OF_DOCUMENT_TOKEN_TO_BE_REPLACED

Chicken Cordon Bleu Stromboli with Mustard Cream Sauce is an awesome meal for any time. Crispy pizza dough is filled with gooey cheesy goodness surrounding deli chicken and ham. Enjoy the Stromboli immediately or let it come to room temperature. Wrap it in aluminum foil and refrigerate or freeze for a later time. This easy to make…

END_OF_DOCUMENT_TOKEN_TO_BE_REPLACED

Spinach Artichoke Bread Ring Dip is the perfect marriage between soft and fluffy homemade rolls and amazing Spinach Artichoke Dip. And guess what? The food processor does most of the work, starting with the kneading of the bread dough! This eliminates the need for a stand mixer or bread machine to produce awesome rolls! Once the…

END_OF_DOCUMENT_TOKEN_TO_BE_REPLACED

Making Breadsticks using a food processor is super easy. With a food processor, it takes less than 1 minute to prepare and knead the dough. After that, the dough sits for its first rise. Once the individual breadsticks have been formed, they sit for their second rise before being baked to perfection.

END_OF_DOCUMENT_TOKEN_TO_BE_REPLACED

Poffertjes, (pronounced puff’ ur jis) or Dutch Mini Pancakes are small, fluffy yeasted treats made in a special cast iron pan. Poffertjes are sold throughout the Netherlands. They are traditionally served hot with a pat of butter and a good sprinkling of confectioners’ sugar. However, they’re equally good when topped with Nutella.

Mardi Gras Cinnamon Roll King Cake is an adaptation of the traditional King Cake. Generally, a dough-filled ring forms the King Cake. I thought it would be fun to cut the filled dough into cinnamon rolls and use them to form the ring. Guess what? It worked like a charm! Also, I should mention that I…

END_OF_DOCUMENT_TOKEN_TO_BE_REPLACED

Louisiana Skillet Cornbread is perfect along side of Black-Eyed Pea Jambalaya, Shrimp Étouffée, Red Beans and Rice, and a whole host of other New Orleans classics. Its extra crispy sides and bottom along with a super moist interior will have you reaching for seconds and thirds. As an added bonus, the leftovers if any, reheat…

END_OF_DOCUMENT_TOKEN_TO_BE_REPLACED

Light and flaky biscuits are a staple in the South. They’re delicious on their own with butter, sandwiched around a piece of ham, or a host of other options. In addition to being delicious, these biscuits take only minutes to make. They’re perfect for not only your holiday dinners, but also your any time meals! 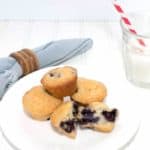 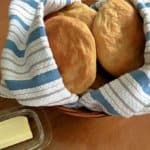 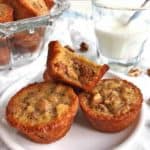 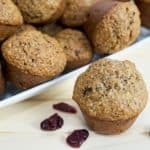